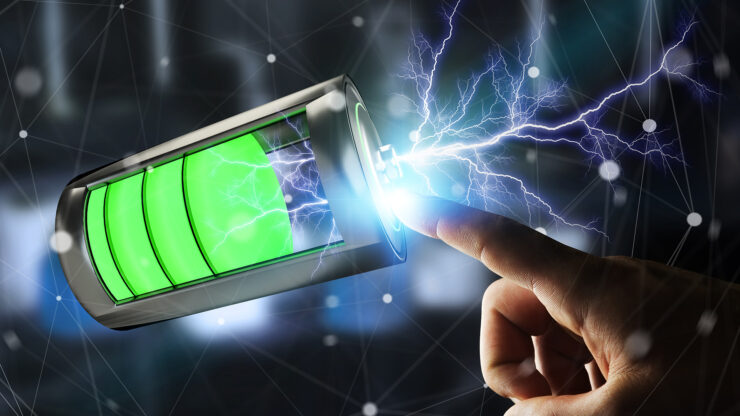 Human chronology, quintessentially, is a time-lapse of innovation, where each breakthrough has laid the foundation for the next one, allowing an unbroken chain of technological progression. Inarguably, one of the most important scientific advancements of our time has been in the sphere of the humble battery.

Battery tech is among some of the most vital nodes in the emerging sustainable global economy. Prototypically, it is an energy storage solution that complements and enhances the viability of green energy generation methods – solar, wind, etc. It is also the engine that powers the hallmark gadgets of our modern era, from electric vehicles to smartphones and laptops.

In this article, I will discuss the pros and cons of various promising battery cell designs. In doing so, I will attempt to deduce the battery architecture that is best suited and most economical for an all-electric future. As an important caveat, please note that there are literally dozens of battery designs being worked upon in various labs throughout the world. However, due to practical constraints, I will limit my analysis to lithium-ion, solid-state and graphene batteries.

Until the advent of the lithium-ion cell, a nickel-cadmium battery was considered the only viable option for portable electronics. The lithium-ion construct consists of an intercalated lithium compound as the positive electrode, called a cathode, a graphite negative electrode, known as the anode, and an electrolyte solution.

However, the battery does have various configurations that employ different materials to produce a design that is best suited for a particular task. For example, many portable electronic devices are powered by the lithium-ion polymer battery which employs a polymer electrolyte instead of a liquid one to reduce the associated fire hazard. The LFP cell is another important variant that uses lithium iron phosphate as the cathode and graphitic carbon as the anode, offering long-term stability at a relatively reduced cost. Interestingly, Tesla (NASDAQ:TSLA) is currently conducting serious negotiations with the China-based Contemporary Amperex Technology Co Ltd. (CATL) (SHE:300750) so as to procure its lithium iron phosphate (LFP) batteries for the Model 3 vehicles made at the Shanghai Gigafactory.

The lithium-ion battery is the pioneer construct of an all-electric age. It is, therefore, hardly surprising that its demand is set to rocket higher within the next few years. As an illustration, its demand in 2015 stood at less than 100GWh. However, by 2030, its demand will reach an astounding 2,000GWh! 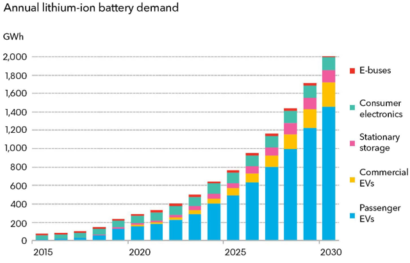 With its demand far outpacing supply, it is no wonder that the top 5 lithium-ion battery producers have an all-hands-on-deck approach when it comes to their battery manufacturing capacity. As an illustration, Tesla’s battery manufacturing capacity at its Gigafactory 1 currently stands at 35GWh. However, to fulfill the 2030 demand level, the world will require at least 57 similar Gigafactories. The infographic below illustrates the world’s top manufacturers of the lithium-ion battery (the units are in GWh): 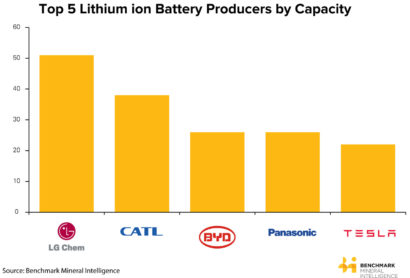 It is evident that the lithium-ion battery will continue to form an integral component of the ongoing transition to a fully electric future. This is because it offers twice the energy density of a traditional nickel-cadmium construct. Moreover, its high cell voltage allows for an efficient cell design. Also, the battery does not have a noticeable memory effect – where the battery gradually loses its maximum energy capacity if it is repeatedly recharged following a partial discharge. Additionally, it has a low self-discharge – where the battery loses its charge in an idle state. Crucially, the battery has a low-maintenance construct unmatched by most other chemical batteries.

This does not mean, however, that the lithium-ion battery does not have any flaws. The high reactivity of the lithium metal poses a safety hazard as the construct may explode in the event of an uncontrolled discharge or when exposed to high temperatures. Moreover, it is quite expensive to manufacture, costing around 40 percent more when compared with a typical nickel-cadmium cell.

Let’s examine some of the other battery cell designs.

A key advantage of such a battery is that it allows the lithium metal to be used as an anode, breaking the “energy-density bottleneck of current Li-ion chemistry,” according to a recent study published in Trends in Chemistry. The problem with this approach is that atoms accumulate in the lithium anode as the battery is charged, causing it to expand and then contract upon the subsequent discharge. This cycle of expansion followed by a contraction causes the solid electrolyte to fracture. Nonetheless, MIT recently announced a breakthrough which employs a unique battery architecture:

“It involves a combination of solid materials known as mixed ionic-electronic conductors (MIEC) and electron and Li-ion insulators (ELI). These were built into a three-dimensional honeycomb-shaped architecture, with an array of nanoscale tubes made from MIEC forming the crucial piece of the puzzle. These tubes are infused with solid lithium metal to form the battery’s anode. And because there is extra space inside each of these tubes, the lithium metal has spare room to expand and shrink during charging and discharging.”

Similarly, Toyota scientists have published a paper that elaborates their findings regarding a solid-state battery that uses sulfide superionic conductors as the electrolyte, allowing the battery to charge in just seven minutes!

Another advantage of this construct is that it allows for more efficient stacking of battery cells without the attendant risk of a short circuit.

However, the construct is not without its pitfalls. The technology is yet to mature and is currently only in an experimental stage. Consequently, this battery is too expensive for any feasible commercial applications at this time.

The structure of graphene battery technology is similar to that of traditional batteries, where two electrodes and an electrolyte solution are used to facilitate ion transfer. However, unlike a typical battery structure, the cathode here consists of a hybrid material containing a solid-state metallic material and graphene – the wonder substance that is composed of a single layer of graphite atoms. Graphene serves two major purposes in electrodes. First, it acts as a buttress – keeping metallic ions in regular order and enhancing the efficiency of the entire battery. Second, the inclusion of graphene as a composite material in the anode enhances the efficiency of the charge/discharge cycle.

Compared to the most efficient lithium-ion battery today, a graphene-based battery architecture has 5 times as much energy density. Moreover, the cell does not experience any appreciable capacity loss even after 400 charging cycles. Crucially, as a naturally occurring allotrope of carbon, graphene has substantial environmental and cost advantages over a typical lithium-ion construct.

Again, however, its biggest short-term downside is that the technology has yet to mature and is presently only being worked upon in the lab.

While all three major battery designs that I’ve discussed here possess inherent pros and cons, I do believe that the LFP cell provides the most bang for the buck in the short to medium term due to its lower cost and enhanced safety. For the longer time horizons, however, I’m betting on a graphene cell to power an all-electric future.

Which battery design do you support? Let us know your thoughts in the comments section below.