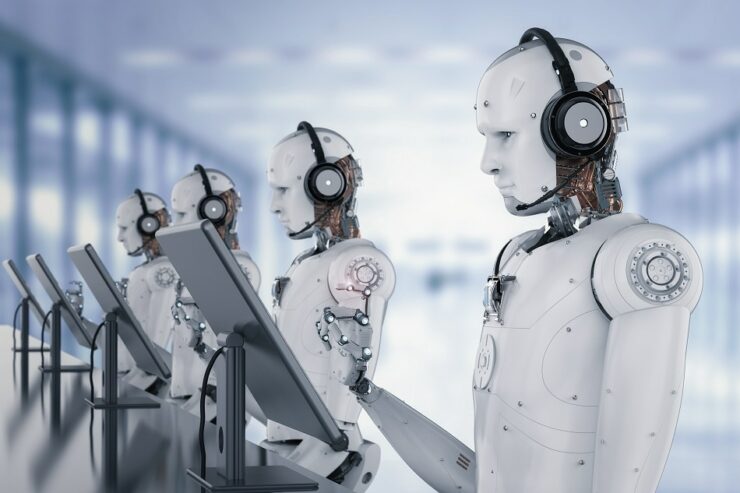 Automation is the defining trend of the 21st century, marked by an inexorable march toward mechanized labor and a concurrent reduction in the physical toil by humans.

However, as this transition to an automated global economy continues, many remain fearful of the rise of neo-serfdom – a new, exorbitantly wealthy ruling class that derives much of its wealth from unbridled automation. In such a scenario, global wealth will be concentrated in an extremely small number of hands while the overwhelming proportion of the global populace toils in misery.

In this article, I will shed light on facts pertaining to automation in order to dispel these fears. I will also discuss the necessary modifications that our capitalism-based economic system will have to undergo in order to ensure that such an eventuality never occurs.

The current division between the haves and the have-nots

Wealth inequality is one of the defining features of capitalism. The market-based dynamics favor entrepreneurial spirit which, by essence, is not common in a society. In healthy doses, a quantum of wealth inequality ensures the smooth functioning of a capitalistic economic system.

However, the current levels of wealth inequality are approaching alarming levels and automation will only exacerbate this trend. According to the 2019 Credit Suisse Global Wealth Report, the world’s richest 1 percent, those with more than $1 million, own 44 percent of the world’s wealth. This dynamic is depicted in the infographic below: 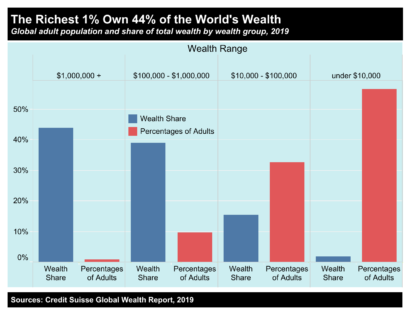 Moreover, according to Forbes, the 10 richest people on the planet possess an astounding cumulative wealth of $801 billion! This quantum of wealth is greater than the GDPs of multiple high- and medium-income countries throughout the globe. The following infographic hammers this point home: 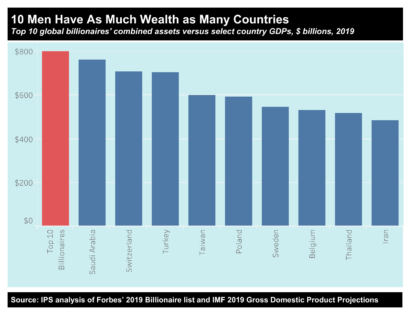 The distribution of wealth is particularly skewed in the U.S. where, as per OECD statistics, the top 1 percent of the population controls 42.5 percent of the national wealth: 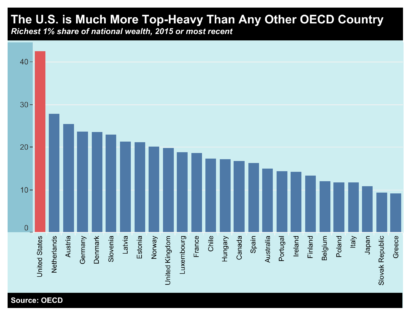 Contrast this with other industrial nations where the richest 1 percent do not own more than 28 percent of their country’s wealth. The detractors of automation point to these statistics in order to increase alarm and fear regarding automation.

On the surface, skeptics of mass mechanization do appear to have a valid point as it is evident that this process will result in substantial job losses. Moreover, automation will favor those with means to deploy the necessary capital, thereby, achieving astronomical productivity at a relatively low operating cost. Let’s examine the impact of automation on the labor force.

Automation and its impact on employment

According to the research conducted by McKinsey, automation can displace between 400 million and 800 million people from the global workforce by 2030. In order to come up with these estimates, McKinsey employed two automation adoption scenarios – a medium-paced one (called midpoint) and a fast-paced one (termed rapid). The infographic below highlights these findings: 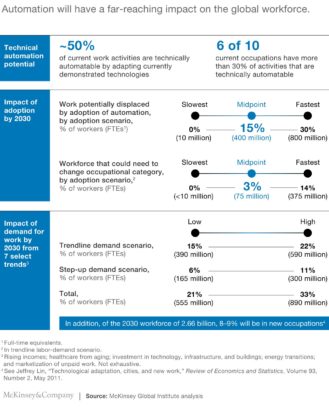 Under the same two scenarios, McKinsey also estimated that between 75 million and 375 million people displaced by automation may need to switch occupational categories and learn new skills. Crucially, for advanced economies, the proportion of the workforce that may need to learn new skills and find employment in new occupations is much higher. For example, about one-third of the workforce in the U.S. and Germany while about half in Japan will have to undergo this change.

It is clear from even a cursory perusal of the information above that automation will prove to be extremely disruptive, at least in the short-term, for millions of people around the world. However, it will also create immense new opportunities. As an illustration, according to the same McKinsey report, around 8 to 9 percent of the total labor demand in 2030 will pertain to new occupations that have not existed before. Moreover, we can modify the construct of our current capitalism-based economic structure to mollify the severe short-term upheavals that this transition to mechanized labor will entail.

Evolution of capitalism – a necessary step for sustainable automation

Over the course of the past centuries, the total employment in the agriculture sector of today’s developed world witnessed an astounding decline: 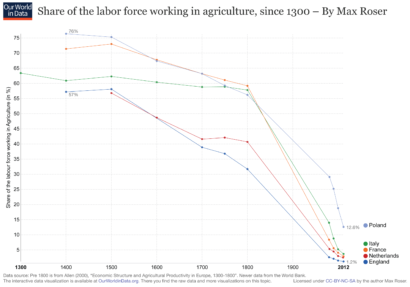 This is the power of technology. Where one archaic avenue closes, numerous other opportunities emerge. Therefore, rather than being apprehensive of the emerging automation trend, we should look for ways to minimize its associated near-term social disruption.

It is a fact that, under the current dispensation, automation will result in a decline in national tax revenues. This is because payroll tax is not charged upon robots. Moreover, businesses will be able to claim increased deductions for capital expenses incurred in pursuing mechanization. Also, robots do not pay any income or sales tax. In order to rectify the resulting fiscal shortfall, a dedicated robot tax may have to be implemented.

Additionally, at least a part of the income generated from the aforementioned robot/automation tax should be directed toward a universal income fund that guarantees a minimum stipulated income to all individuals.

Of course, hardcore free-market enthusiasts will term these policies ‘free-money’ schemes that incentivize idleness. What should be noted, however, is that millions of people throughout the world will have to undergo skill upgradation in order to become employable in the age of automation. Such comprehensive skill set overhauls require time. In the meantime, a universal income program can play an important role in facilitating this transition while minimizing the negative social repercussions generated from mass unemployment.

In pursuing universal income, we will obviously digress from the fundamentals of our current capitalistic economic system. But bear in mind that this economic system is a human construct and, like all humans, should be able to adapt to the changing times in order to retain its utility for the society. It is a fact that capitalism unleashed unprecedented economic growth and wealth generation over the past 200 years. However, this centuries-spanning construct needs a vital overhaul for continued economic progression in the age of automation.