Asus’s ROG Maximus XII, ROG Strix, And Prime Z490 Motherboards Leak Out With Memory Support Of Up To DDR4-4800 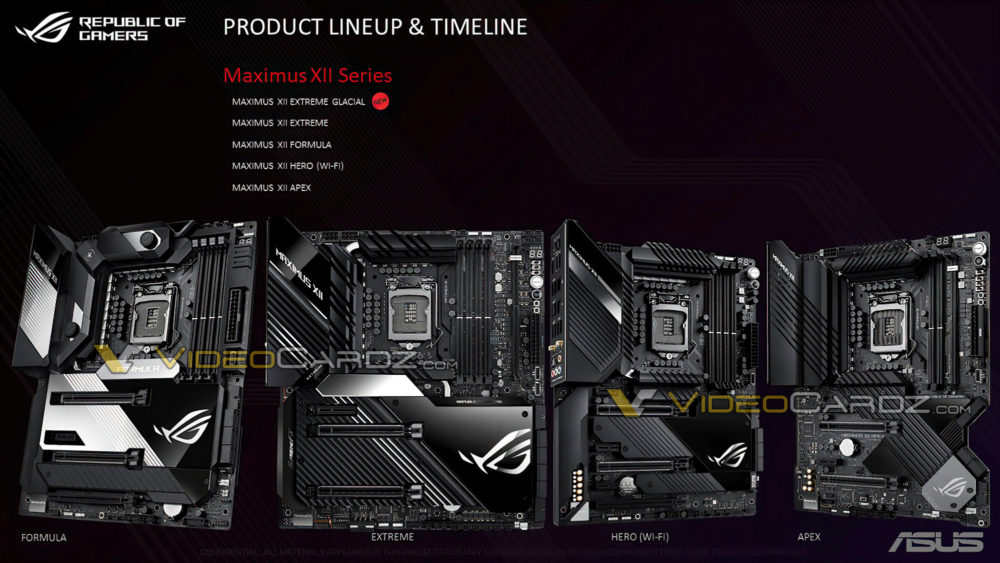 Recently, we saw the news surface of Intel's Comet Lake-S processors and the benchmarking behind it, and it is only fitting that we see motherboards come along with them. When talking about Asus' motherboards, we talk about three different lines, the ROG Maximus, ROG Strix, and Asus Prime. The next-generation Z490 motherboards featured in these three lineups have now been leaked by Videocardz.

The ROG Maximus XII is the top end motherboard Asus will be offering. The first that we immediately notice is that all motherboards with at least two PCIe x16 slots support AMD CrossFire, but SLI is a premium feature that could be seen with the Z390 series, but the H-Series this generation has lost its SLI support. If you have SLI in mind, make sure to look for a motherboard that supports it.

The Maximus XII series has 4 motherboards with a variant of Maximus XII Extreme with a glacial version which I could only assume is a white version of the motherboard. All four models feature a 16 stage power supply and can support DDR4 memory overclocked up to 4800MHz using ASUS' OptiMem III technology. The datasheet says that the PCIe support has not been upgraded to 4.0 and will be 3.0, but rumors say that the motherboards have PCIe 4.0 support built-in.

The only catch is that the PCIe 4.0 support will only be supported once the Rocket Lake-S processors come out. All of the motherboards have a 2.5 Gbe network card, and only the Formula and Extreme feature 10Gbe networking. The only E-ATX motherboard in this lineup is the Maximus XII Extreme.

For the Strix series, Asus will bring out at least 8 different motherboards in different sizes such as Mini-ITX, Micro-ATX, and Standard ATX. Only one out of these 8 motherboards will support HDMI 2.0A, and that motherboard is the ROG STRIX Z490-I. Every motherboard in the STRIX line will feature 2.5Gbe Ethernet connections, which is very different from the Prime series.

It is a little disappointing to see Intel holding off on PCIe 4.0 when it is rumored that is completely possible on these motherboards and AMD already has had the support for a while now. The motherboards still look quite good for the Z490 platform and I am excited to see what the ROG Maximus XII Extreme Glacial looks like. For coverage on Asus' TUF line, this link will lead you to the post covering it.