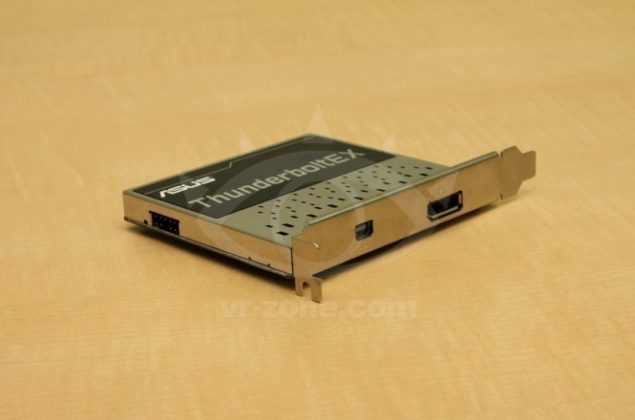 ASUS had showcased a few new AM3+ socket motherboards at Computex for  the remainder of 2012 that are based on the 900FX chipset that concluded a Crosshair V Formula Z, M5A99FX PRO R2.0, Sabertooth 990FX R2.0, 5A99X EVO R2.0 which all feature a new header labeled as the ‘TB_HEADER’ for Thunderbolt.

That header in fact has been put in place there for ASUS’s Thunderbolt EX add-on card. The ASUS Thunderbolt EX itself is a PCI-E 2.0 4X slot card that is driven by Intel’s ‘Cactus Ridge 2C’ Thunderbolt host controller.

Coming to the TB_Header, it is rather a low level connection through which it controls its power state, signaling and device hot plugging events to the motherboard’s BIOS. The back panel consists of a one full size DisplayPort, one Thunderbolt and a one mini DisplayPort out. The full size DisplayPort however is an input that is taken from the graphics card.