While you must have enjoyed feasting your eyes on ASUS ROG Z97 motherboards, you'll also enjoy the sight of their TUF series which has been updated with new products. In addition to the Sabertooth MARK 1, we're also going to show you the MARK 2 and Gryphon motherboards in all their glory. 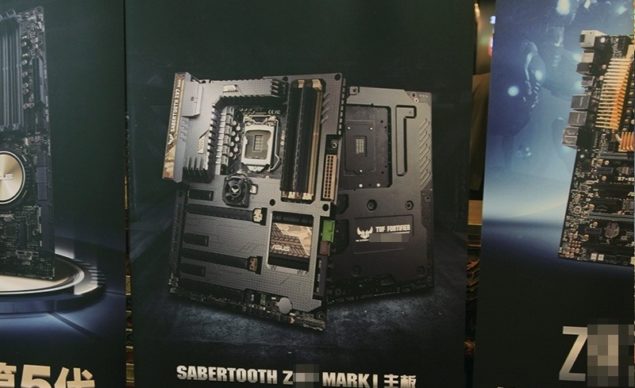 The second lineup we will detail is ASUS's Z97 TUF "The Ultimate Force" motherboard lineup which are aimed towards enthusiasts, overclockers. Built with top of the line Military Grade Components, the Z97 TUF series will include longer and stable performance and take overclocking to the next step. The new motherboards from ASUS include some interesting features this round such as  Intel Ethernet, LAN Guard, TUF Components, DIGI+ Power Control and the latest TUF Frontier thermal shield and barrier for additional cooling and stability to the board layout. The ASUS Z97 motherboards 'TUF' lineup includes the following products which will be detailed below: 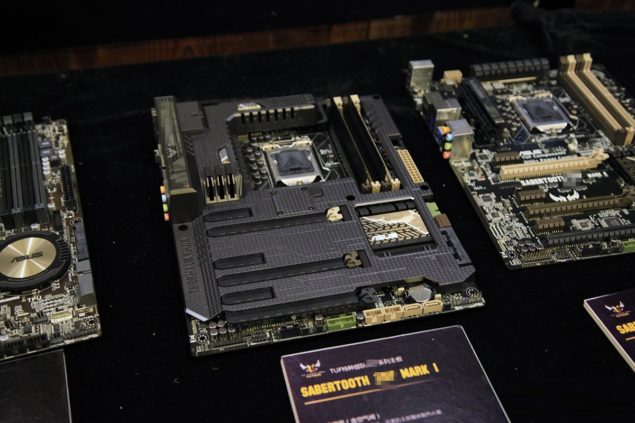 The flagship TUF series motherboard which will be introduced in ASUS’s Z97 motherboard lineup is the Z97 Sabertooth Mark I fitted with the latest TUF Fortifier shielding which protects the board from damage and enhances the cooling performance. Much of the details are hidden since we  can’t spot what’s underneath the TUF armor but we can spot an 8-Pin power connector that supplies juice to the LGA 1150 socket which itself is connected with a beefy 8 Phase DIGI+ supply. Four DDR3 DIMM slots seem to feature some thermal guard to enhance cooling for the DIMMs. The Storage options include 4 SATA 6 GB/s ports and a USB 3.0 header. Now, the most interesting feature of this board is that it comes with two SATA Express ports which will allow the motherboard to equip high-performance SSDs for faster transfer speeds.

Expansion slots include three PCI-e 3.0 x16 and three PCI-e 3.0 x1. Interestingly, there's no M.2 PCI-e SSD slot on either Sabertooth Z97 boards. The motherboard was shown with its TUF Frontier armor which is a massive shield for the board itself and can also equip a small PWM fan in the center for more cooling if required. 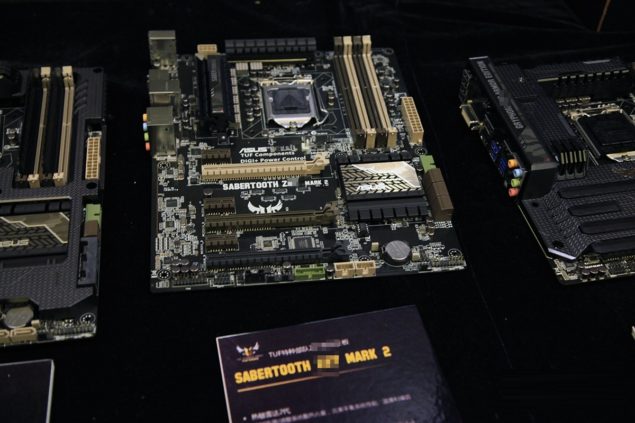 The second ASUS Sabertooth board is the TUF Sabertooth Z97 MARK 2 which just like its brother features the TUF Frontier armor. Featuring Military Grade components, the Sabertooth Z97 MARK 2 comes with a 8 Phase DIGI+ supply, power is provided through an 8-Pin connnector. Four DDR3 DIMM slots allow support for 32 GB of DDR3 memory with overclocked specifications. The Storage options include 6 SATA 6 GB/s ports and a USB 3.0 header. ASUS doesn't feature SATA Express on MARK 2 like the one on MARK 1 and there's no M.2 slot either.

Expansion slots include three PCI-e 3.0 x16 and three PCI-e 3.0 x1 slots while several I/O connectors can be spotted on the board. The MARK 2 is better than the MARK 1 technically, the only difference is the availability of SATA Express on the MARK 1 which isn't going to make much difference especially when such storage options are limited at the moment. 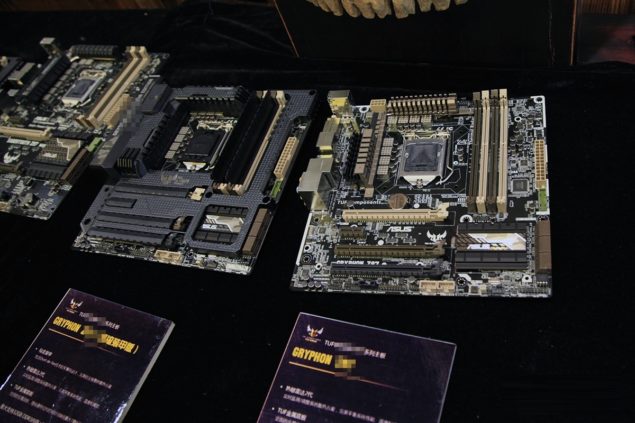 Adopting the same TUF Frontier scheme is the ASUS Gryphon Z97 which is the M-ATX sized motherboard of the TUF series lineup. It comes with a 8 Phase DIGI+ VRM supply featuring Military grade components while the LGA 1150 socket is powered through an 8-Pin power connector. Near the 24-Pin ATX connector are four DDR3 DIMMs which support O.C memory and a maximum capacity of 32 GB. Expansion slots include three PCI-e 3.0 x16 and a single PCI-e 3.0 x1 slot. The heatsink layout is neat for this motherboard and enough to cool the PCH and VRM components for stability and overclocking.

Storage options include six SATA 6 GB/s ports and a USB 3.0 header. More USB 3.0 slots are located at the I/O panel along with a 7.1 channel audio jack and several display connectors. The motherboard will include the TUF Frontier shielding for protection and additional cooling. 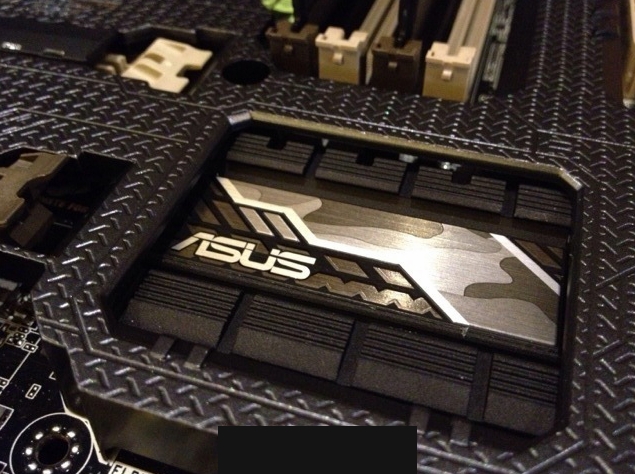 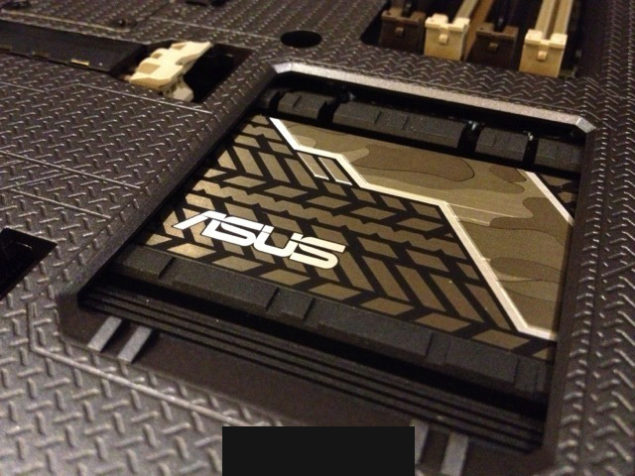 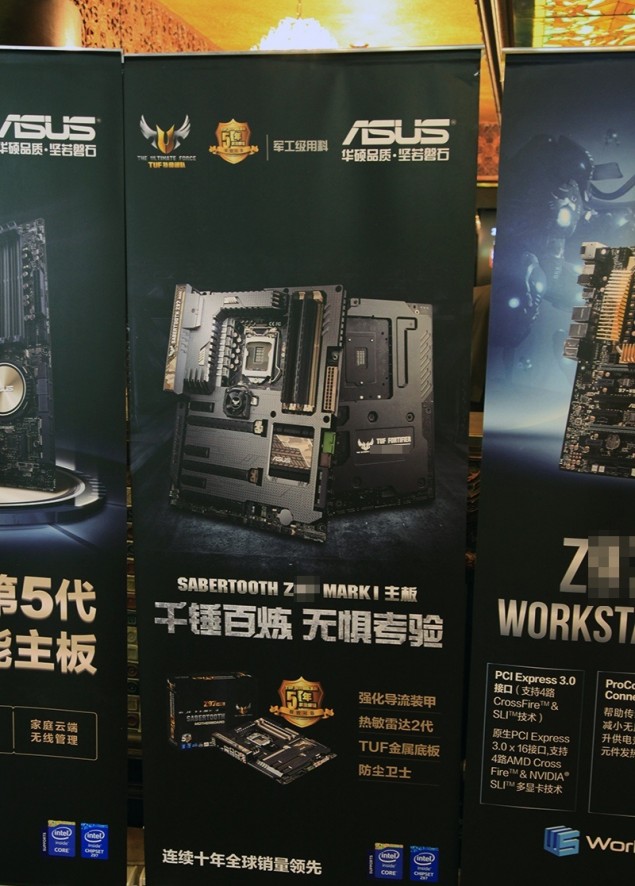