ASUS is preparing a range of next-generation laptops which they will be displaying at CES 2021 but a few of these models featuring AMD's Ryzen 5000 CPUs and NVIDIA's GeForce RTX 30 series GPUs have already leaked out. Romanian retailer Altex has also listed a new TUF Gaming A17 model that features the AMD Ryzen 7 5800H CPU and NVIDIA GeForce RTX 3070 mobility GPU.

The laptop (ASUS TUF A17 FA706QR-HX004) is powered by AMD's Ryzen 7 5800H CPU which is an 8 core and 16 thread chip with a base clock of 3.00 GHz and a boost clock of 4.30 GHz. The CPU features 16 MB of L3 cache and 4 MB of L2 cache. The TDP for the chip is 35-45W. While there's an onboard Vega 8 CU graphics chip, the laptop will primarily be using the RTX 3070 discrete GPU to power the visuals. With that said, Zen 3 will deliver a huge leap in single-core performance and also efficiency figures on the laptop segment.

As for the specifications of the ASUS FA706QR-HX004 (TUF Gaming A17), we are looking at a 17.3" display that features a matte IPS panel sporting a full HD resolution. The screen comes with a 144 Hz refresh rate. The screen has a maximum brightness of 250nits. The laptop weighs in at 2.60 kg & will be shipping with a 90 WHr 4-cell Lithium-Ion battery which is standard for a product of this size. Other specifications include 16 GB DDR4-3200 memory which should be upgradable to 32 GB. There is a single 512 GB SSD operating on the PCIe 3.0 protocol and you can also get up to 1 TB capacity. There's also an extra M.2 slot available if you want to further expand the storage on the said laptop.

As for discrete graphics support, the ASUS TUF Gaming A17 will be featuring the NVIDIA GeForce RTX 3070 8 GB SKU which will be a first for the AMD Ryzen notebook platform. This GPU features 40 SMs on the GA104 GPU SKU (presumably, the GA104-770). This chip would feature a total of 5120 cores and a maximum clock speed of up to 1300 MHz (~1290 MHz) for the Max-Q variant that this model rocks. The graphics card also features 8 GB VRAM which runs across a 256-bit wide bus interface but it remains to be seen if NVIDIA is utilizing 12 or 14 Gbps DRAM modules for its mobility lineup. In the case of 14 Gbps, the GPU will be able to offer a maximum bandwidth of 448 GB/s.

Some listed features of the laptop include: 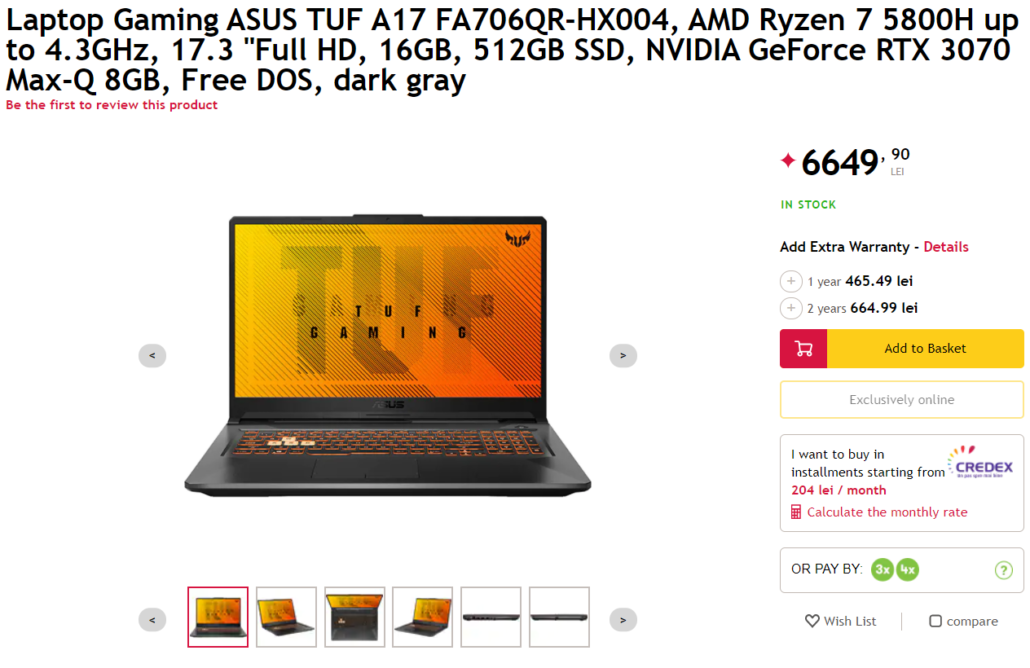 Aside from the primary specifications, you also get NVIDIA Optimus support on the ASUS A17 TUF Gaming laptop. Some I/O include Wi-Fi 802.11ac, Bluetooth 5.1, a couple of USB 3.2 ports, and a 3.5 mm audio jack. The retailer has listed the model for a price of 6649 Romanian LEU which amounts to $1670 US. We expect that the retail MSRP in the US should be around $1500 US which makes this a really good option for a gaming laptop. The retailer has also listed the laptop as "In Stock" which is surprising since the launch isn't till next week.