Asus ROG Phone 3 could be summed up as the gaming phone of the year. It recently passed through the Taiwanese certification, confirming a number of different specifications, but so far, the device has been more or less a mystery as far as the looks are concerned. We did see glimpses but they were not enough to actually give an impression of what the device is all about.

However, the recently leaked renders do shed light on everything, and we must say that the Asus ROG Phone 3 is definitely a looker even though it is still heavily reliant on the design language made popular by the first phone in the series, only a more refined design.

Asus ROG Phone 3 Renders Show the Phone From Every Angle

The leaked renders are coming as a courtesy of 91Mobiles who have shared a number of pictures that show some new details of the phone. it seems that the phone is going to get gaming triggers along with a side-mounted charging port that will be used for charging as well as plugging in accessories. The design looks a lot like previous ROG phones, so it is not something surprising. 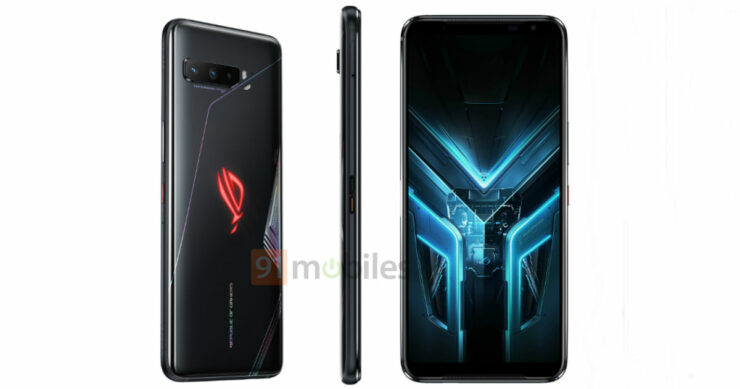 It is safe to say that this design language pretty much clears any and all confusion about how the phone is going to look like. I, for one, am really liking how the phone looks even though gaming phones are the last thing I will be buying.

The Asus ROG Phone 3 is tipped to be one of the first smartphones in the market that will sport the new Snapdragon 865+, it is slated to release on 22nd July, later this month. Rest of the specs include a 6.59-inch display, a 6,000 mAh battery, along with 512GB of internal storage. Some of them were confirmed by the Taiwanese certification that the phone received a few days ago.

We will keep you updated as there is more information on what the Asus ROG Phone 3 is going to be about.