A month ago, we talked about ASUS's ROG GX700 laptop, a gaming behemoth for the mobile user who hungers for enthusiast parts on a nice platform. The ROG GX700 might be the most craziest, insane creation we have ever seen on the laptop front but pictures posted by ASUS on their ROG page shows that the gaming beast is also a beautiful and elegant creation on its own terms. 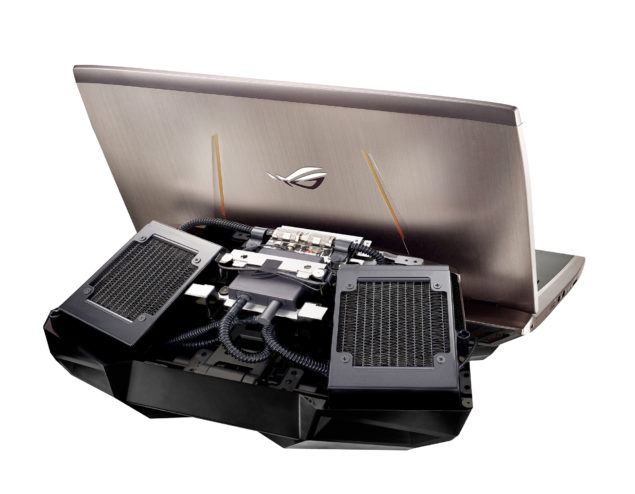 From details we gathered earlier, we know that the ASUS ROG GX700 packs an insane set of hardware specs. It combines the two most efficient core architectures available today, Skylake for CPU and Maxwell for GPU. Even though we both NVIDIA and Intel have mobility versions prepped for notebooks and laptops, the ROG GX700 is packed with a full blown GeForce GTX 980 graphics card and a Core i7-6700K equivalent Skylake processor with overclocking fully enabled.

The Skylake-K mobility processors brings the several overclocking features from the desktop CPU family over to the mobility platforms, offering unlocked multiplier, full range BCLK adjustments and various configs to allow enthusiast to grab more performance out of the new performance laptops. The chip is clocked at an impressive 4.00 GHz and comes in a quad core package with hyper-threading enabled. You can fully utilize the OC features the leverage performance in the given cooling environment. Since this is a high-end, enthusiast focused laptop, we are looking at no less than 64 GB of memory (DDR4) along with high-performance SSD based storage and a ton of I/O connectivity. 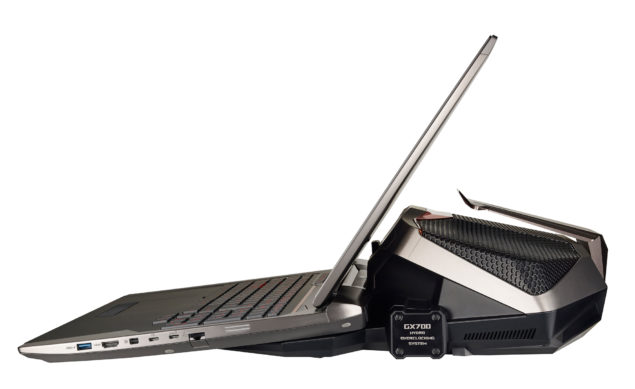 Additionally, we are looking at 8 GB of GDDR5 memory that operates along a 256-bit bus and clocked at 1753 MHz (7.00 GHz effective) clock speed to pump out 224.0 GB/s bandwidth. The GeForce GTX 980M also had a slower 5.0 GHz memory clock that pumped out 160 GB/s bandwidth and came with a smaller 4 GB GDDR5 VRAM.The GeForce GTX 980 has a TDP of 165W, the GTX 980M has a TDP of 125W while the GeForce GTX 980 (Laptop SKU) will have a TDP around 125W – 150W (configurable by OEM) since NVIDIA is using quality GM204 chips with the very best silicon and configuring the voltage accordingly to meet the performance demands. In fact, the GTX 980 uses a specialized MXM PCB board that comes with 4 to 8 Phase PWM supplies and deliver 50% higher current than the GTX 980M boards.

With higher current input and an enthusiast focused design, NVIDIA will be offering full overclocking support on laptops with the desktop-class GTX 980. This GPU is said to gain an additional 10-15% performance uplift under overclocked conditions, reaching clock speeds past 1400 MHz on core and 7.5 GHz on memory. There’s also a possibility to see SLI configurations of such cards used inside high-end laptops though you might need some hefty cooling designs such as the water-cooled ROG GX700 series laptop if you’re going to purchase one.

Judging from the reception since IFA 2015, the ROG GX700 ultra-performance gaming laptop has been deemed one of the most highly-anticipated laptops this year, and arguably this decade (ROG is turning 10 soon!).   GX700 has a game-changer which has opened the door for laptops to have a whole new level of cooling and thus potential for the highest possible performance.  The key feature to set itself apart from the rest is the world’s first ever water-cooling system in a laptop, which is actually more crucial than a full desktop due to the compact size.  Such a system can maximize the gaming performance, overclockability and thermal performance while fully utilizing the overclockable Intel K-Series Skylake processor, and the very first desktop GeForce GTX GPU in a notebook form factor – Nvidia GTX 980 (not GTX 980M).  Here, we want to treat you to some high-quality pictures from every angle!  Enjoy. via ASUS

The ASUS ROG GX700 comes with a beautiful design and an insane cooling system. The whole AIO liquid cool system can dock on the back of the laptop with ease and a single power cable can fit into it to reduce overall cable clutter. The chassis of the laptop is fitted with several blower fans to keep the system running cool and stable but when overclocking comes in the equation, you would definitely require more cooling and to solve the heating issues, ASUS has brought up the first liquid cooling system to the ROG GX700 that contains two 120mm radiators that channel liquid into the interior of the GX700 that has a standard heat pipe solution and several water cooling pipes leading to the critical components of the laptop. With the docking system intact, the system can deliver 43% faster graphics performance, 48% faster CPU performance and up to 31% faster memory performance.

Asus GX700 contains a standard heat pipe and water-cooling pipes that can consume a hefty space to reduce heat drastically. These are essential when one needs to overclock the machine. According to Asus engineers, the graphic chips on the machine can go up as high as 43 percent faster, the CPU at 48 percent faster, and the memory, up to 31 percent faster, when the liquid cooling attachment is plugged in. The display comes with the choice of either 1080P or 4K, 17.3 inch IPS panel with NVIDIA's G-Sync technology that will make games run  smooth and tear-free. There are currently no words on the pricing but expecting the lower spec'd model costs around $2000 US, we can see this beast retailing past the $3000 range which is insane.