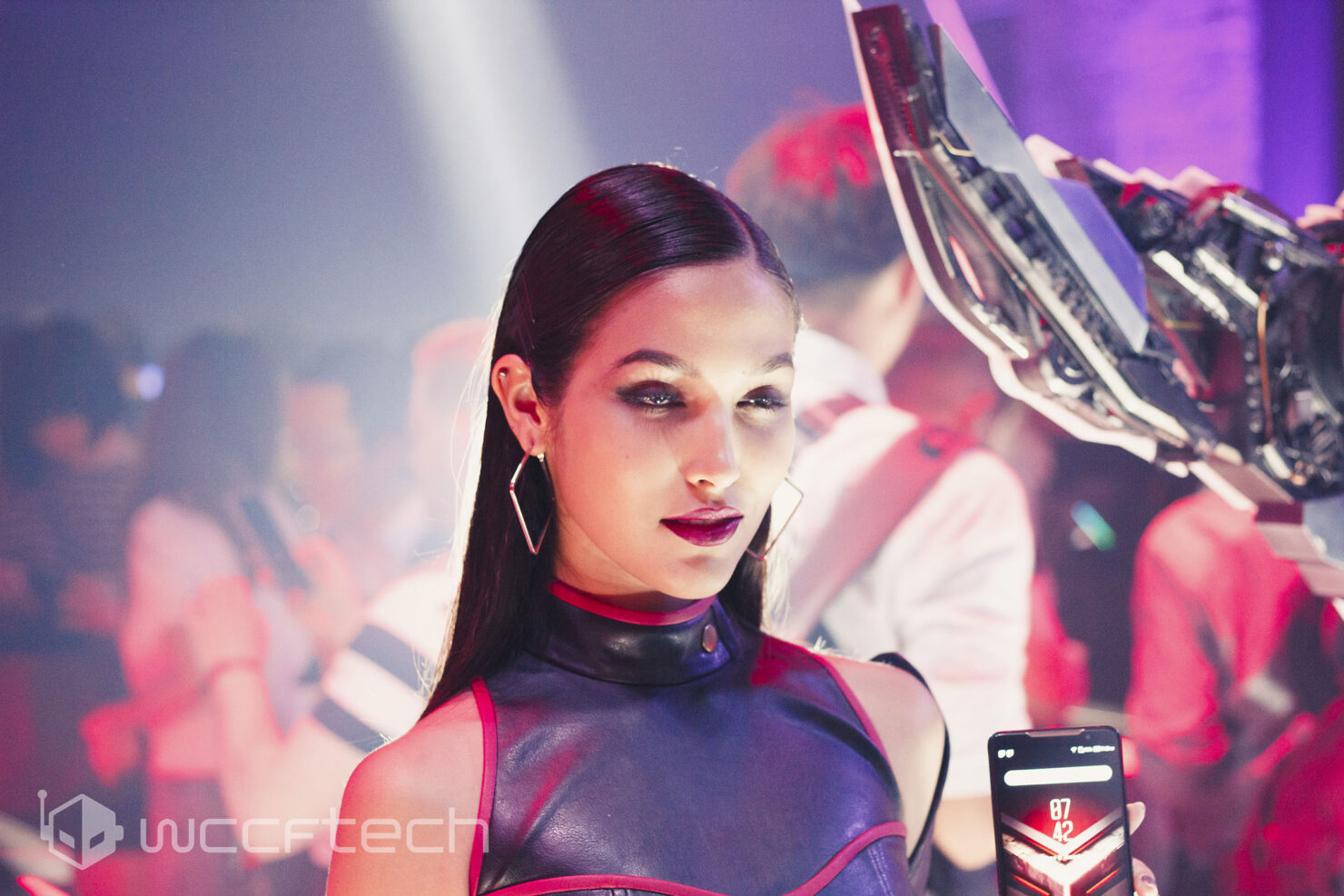 An ASUS booth model showing off the ROG Phone.

We are reporting live from Computex 2018 this time and we wanted to make sure that our readers get the best of audio/visual updates from the events. ASUS ROG, today, unveiled not only new coolers, but a new PSU and a brand new gaming smartphone dubbed the ROG Phone on top. This is our coverage of the media-only demo booth that the company had set up behind the stage.

First up we have the various setup of new ROG coolers which come in the 360mm all the way down to the 120mm variety. Both feature a very interesting approach to design philosophy and feature an LED showcasing the ROG logo. Unfortunately its rather difficult to capture that on camera so just photos will have to suffice for now.

The new ROG cooler was also demoed inside a fully tricked out RGB showcase chassis which you can see below. The company also showed off its brand new lineup of laptops namely the SCAR II and HERO II, both of which feature high-speed display panels from NVIDIA. The ASUS ROG Strix SCAR II supports a 144 Hz display with a 3ms response time. A dedicated NVIDIA GTX 1070 powered the laptop coupled with an 8th gen Core i7 processor from Intel.

Before we go any further, here are some more closeup shots of the brand new cooler lineup from ASUS ROG in all its glory. It is clear here that the company did take inspiration from NZXT branded AIOs which debuted the infinity mirror look on closed loop coolers. It is also clear, however, that ASUS ROG wanted to make it clear that their aesthetic was uniquely distinct from the NZXT variety and this is the result of that endeavor.

ASUS also showed off their latest ROG THOR 1200W Platinum PSU. This top of the line PSU is fully modular and been assembled by OEM Seasonic. The power supply unit carries an 80 Plus Platinum rating so you can be assured of best quality and performance. Aside from its very aggressive specs, the PSU comes with full RGB Lighting control with an addressable RGB header that uses the ASUS RGB AuraSync software. ASUS even placed an OLED screen on the PSU to make statistic monitoring easy for users. The PSU also comes with a 0db mode based on operation and temperatures but those who want their PSU fan up and running all the time, well there's a toggle switch on the PSU just to do that.

Let's face it, you came here for the girls. Fortunately for you, when I clickbait, I deliver on the promise, so here is a gallery of the ASUS ROG booth models showing off ROG branded HERO II, SCAR II and of course - the brand spanking new ROG Phone.