Ashes of the Singularity Alpha: The First DX12 Benchmark

Windows (and Xbox) gamers have been reading for the past year or so of the increased performance guaranteed by DirectX 12, the new version of Microsoft's API exclusive to Windows 10 and Xbox One.

With the operating system out since July 29, it is finally time to check the first publicly available DX12 benchmark: the Alpha build of Ashes of the Singularity. 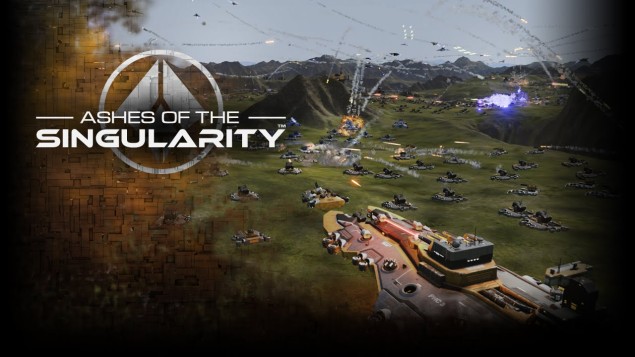 Stardock's game has been literally at the helm of this particular charge. It's based on Oxide Games' Nitrous Engine, specifically designed to take advantage of lower level APIs such as Mantle, DirectX 12 and Vulkan.

It is only fitting, then, that we would get the first taste of the future in gaming by checking this specific game. However, the taste is currently bittersweet, at least for NVIDIA users.

In theory, DirectX 12 should allow for significant performance improvements whenever the rendered scene would usually be CPU bound, which is absolutely the case for an RTS game showing hundreds if not thousands of units. The new API can also manage 600K draw calls according to Wardell himself, a much higher number than DirectX 11.

A few months ago, Anandtech conducted an early test on Star Swarm, a stress test made by Oxide Games using the same engine - Nitrous. The results all indicated fairly massive performance gains by using DirectX 12.

With these premises, you can imagine our bewilderment when we got mixed results, at least with NVIDIA cards. That's right: with a Titan X and 780Ti, we got less average FPS in DirectX 12 than in DirectX 11.

Strangely, a 770 yielded massive benefits, while both AMD cards got performance improvements of varying degrees. Let's dive into the benchmarks (which we ran at 1080P whenever the fullscreen bug didn't prevent it).

As you can see in the images below, the driver overhead is flattened on DirectX 12, however despite this we registered a 0.6 FPS loss on average, which amounts to -2.5%. The summary also shows that we are supposedly GPU bound with this machine. 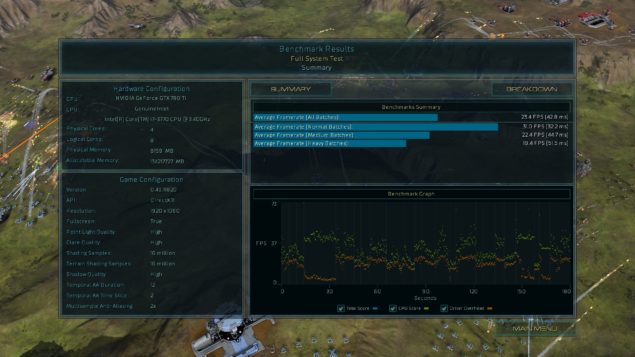 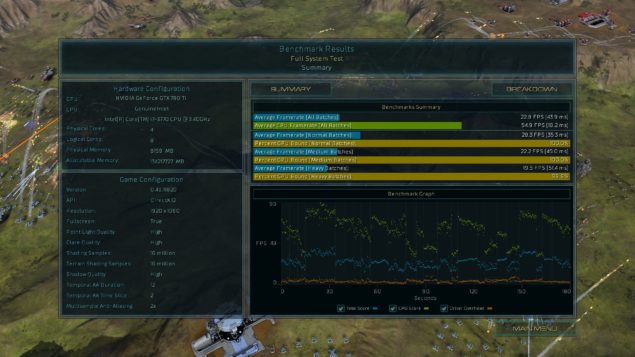 We got similar results from this more powerful machine. Once again we are reportedly GPU bound, even with a GTX Titan X, and the 3.0 FPS average loss while running DirectX 12 amounts to -6.5%.

It should be noted that for the first time here we encountered a bug preventing us from running the benchmark at fullscreen, so we had to opt for windowed at 1902x1033. 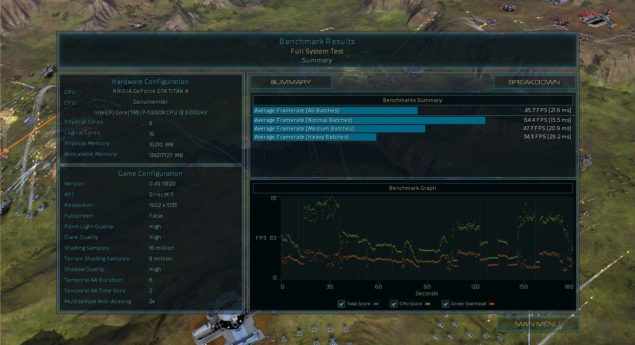 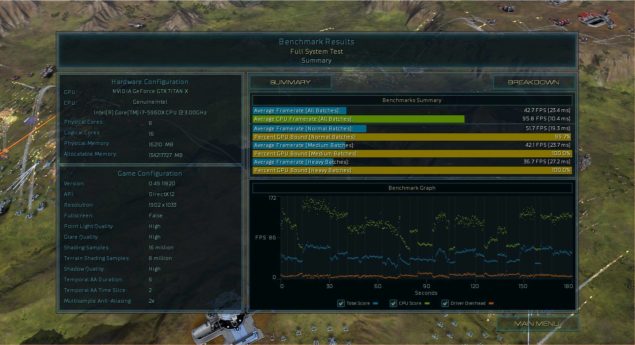 This was the real surprise. With a less powerful PC, the DirectX 12 benchmark registered a gigantic 35.6 FPS increase, which equates to +180% performance. Also, for the first time we're not marked as GPU bound even though GTX 770 is obviously inferior to the GPUs we previously used. 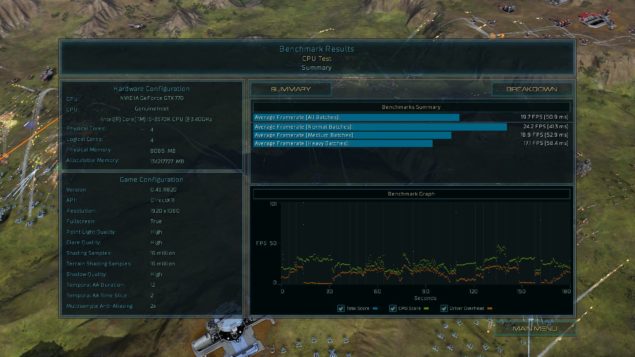 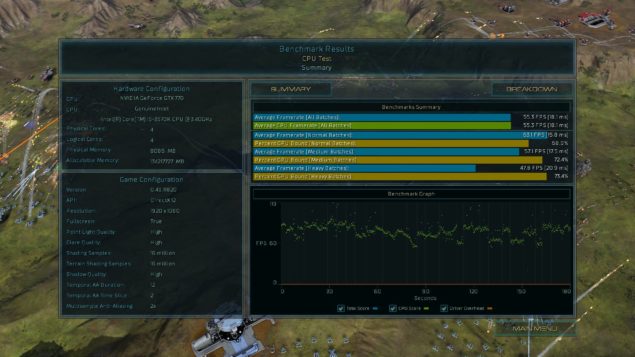 This is a fairly modest gaming PC, no doubt, and DirectX 12 doesn't magically make it amazing - however, there is clearly an improvement here, as we've gained 3.5 FPS on average, or +28%. We were forced to opt for windowed at 1904x1041 in this case. 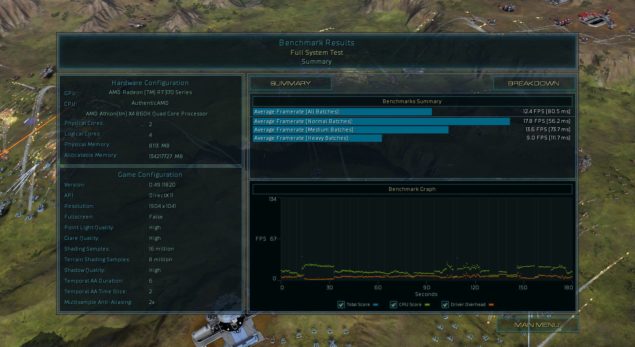 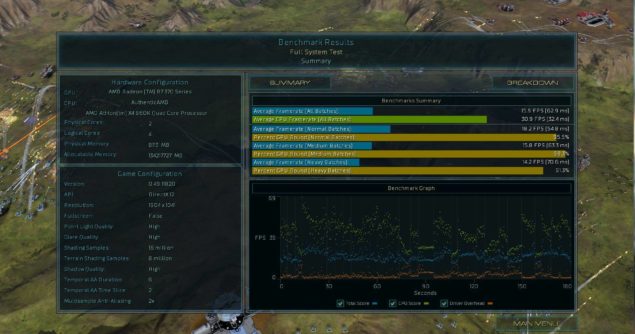 With the newly released R9 Fury, the performance improvement brought by DX12 results in 20.6 FPS gained on average, which amounts to over +100%. Once again the fullscreen bug prevented us from doing a full 1080P comparison, so we had to opt for 1898x1024 instead. 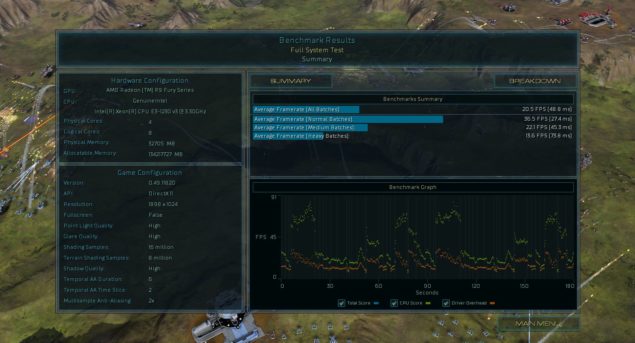 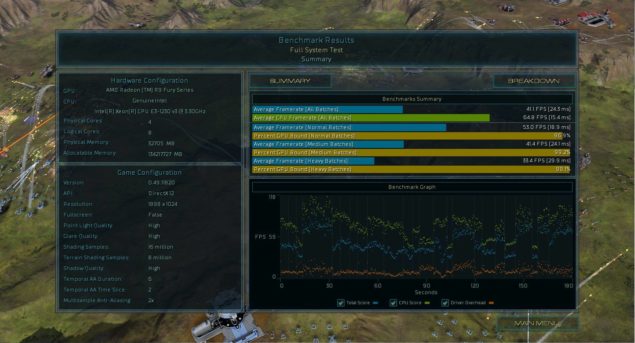 While the AMD tests paint a fairly consistent picture, the same cannot be said of NVIDIA, which yielded inconclusive results including two performance losses out of three. The company clearly knows it, which is why they released a statement about how this isn't a good DX12 benchmark to assess the performance of the new API.

Why is that so? We can only speculate. Ashes of the Singularity is clearly still in development, and even the drivers may not be perfectly tuned yet. It's still early days for DirectX 12 and there will be more tests in the near future, given how widespread DX12 support is going to be.

In the meantime, we'll keep reporting on the topic as always, so stay tuned.

Special thanks to our own Jeff Williams for his contribution to this article.