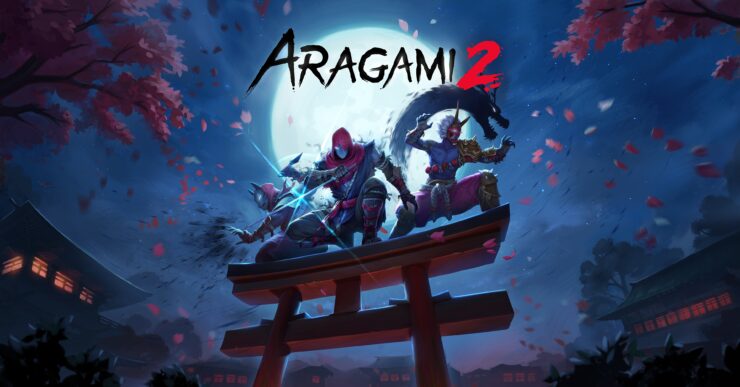 Aragami 2 is certainly one of the most interesting games due for release this month, as mentioned by Nathan in his September list. A direct sequel of 2016's stealth game made by Spanish indie studio Lince Works, Aragami 2 has much loftier ambitions according to the developers.

Given that the first one garnered acclaim and a sizable following, we were intrigued and reached out to Lince Works to pry more information out of David León (co-founder and game director), Pere Rius (chief operating officer and executive producer), and Gina Campos (community manager).

How did you cope with COVID at Lince Works? Are you still working remotely?

Pere: Having to pivot from working at the office to working remotely didn’t actually have a huge impact on the development of Aragami 2. Luckily, game development does not require being physically at the office, and moving the workstations was pretty fast. The only thing that suffered was the fluidity and speed of internal communication. In the office, for example, a quick conversation is enough to solve an issue. When working from home, it requires you to set up a meeting, cutting off the workflow sharply. And, of course, we miss the proximity and companionship, the human interaction you have when the team gets together under the same roof. We’re still working remotely nowadays, and it’s something that’s going to stay even after the pandemic, in order to prioritize flexibility.

How many developers do you have working on Aragami 2?

Pere: The Lince Works core team is made up of 20 people, but we have several people and external partners who have helped us on many fronts, such as character design and modeling, the creation of trailers, or support for the multiplayer implementation.

You've described this sequel as 'much more ambitious' than the first game. Can you explain in which ways?

David: For the first Aragami game, we had to leave out a great deal of features and other more grandiose ideas, simply because we lacked the experience, resources, and budget. So, Aragami 2 represents everything we wanted Aragami to be.

The technical leap in this sequel is evident. Aragami 2 has significantly larger levels with a wider spread of vertically at the core, which means more freedom and replayability for players. Paired with highly polished and agile gameplay, you will truly feel like a ninja in the shoes of Kurai (the protagonist).

Since Aragami 2 can be played by 3 players in online co-op, we placed special attention to the composition of clans and clan identity. It must feel like your clan carries its own style and, within it, each player has a singular appearance. We included a greater variety of character customization features for personalizing your looks and equipment.

Finally, the team set out to develop a new combat system from the ground up. This was indeed one of the most ambitious and challenging tests for us. In Aragami 2, you decide how to engage enemies, whether you stay hidden or fight them straight on. You choose your own playstyle. All in all, we feel we achieved a good balance, making the combat optional, yet hard to master, so it wouldn’t be overused by players.

How long do you expect it'll take for the average player to complete the campaign in Aragami 2?

Gina: It always depends on the pace and playstyle of each player, but we’d say that the first run of Aragami 2 will take around 15 hours approximately.

Are there any difficulty settings or options?

David: There’s no difficulty setting in Aragami 2, but you have many ways to make the experience less or more challenging. For example, you have items you can use to increase your attack power or call your friends to join you in co-op and help you pass the mission. We do not eliminate the idea of adding some difficult options in future updates, like an NG+.

The first Aragami featured a level editor that extended replayability for many users on PC. I know you've said that there are no current plans to do the same in this sequel, but is there a chance you'd look into it again after the release if enough players ask for it?

Gina: We’ll continue to support Aragami 2 post-launch and take into account the community’s feedback. Of course, if a level editor is what most fans want we will do our best to bring it into the game. However, as much as we would like to, we cannot guarantee the inclusion of this feature. Our priority will be to update the game with patches to improve the player experience and work on DLC that expand the Aragami 2 experience.

Aragami 2 will be coming to Game Pass on day one. How did this happen and how do you reckon it'll affect the game's reception and visibility?

Pere: We are really excited to bring Aragami 2 to Game Pass! The way we ended up there was strangely simple and straightforward. We were in talks with Microsoft regarding technical elements for their platforms, mostly, but also about collaborating with them to increase Aragami 2 visibility in their ecosystem, and that’s when they proposed. The team at Microsoft came with the offer and everything from there was very smooth. We are happy to see more indie games on Game Pass because it gives visibility to the amazing work that’s being done outside the AAA sphere. We expect to have much greater exposure at launch and to attract a new audience that otherwise would never have discovered or played the game.

Are you planning to release any post-launch DLCs or expansions?

Pere: We intend to release DLCs on Aragami 2 after launch, but that will be announced at a later stage.

David: On next-gen consoles, you can run the game up to 4K resolution and 60fps. You also have better textures, better shadow distance and more detailed scenarios, and better loading times.

Will there be cross-play functionality?

David: For now we can only confirm cross-play between PC (Windows, Steam, and GOG) and Xbox. We’d like to extend that to PlayStation systems but we cannot confirm at this moment.

Are you looking into a potential Nintendo Switch port of Aragami 2?

Pere: Aragami: Shadow Edition for Nintendo Switch had a great reception from players, so we would love to release Aragami 2 on Switch as well. Nevertheless, we cannot confirm a Nintendo Switch version at the moment as our priority right now is to deliver the best experience possible across the five current platforms we signed up with.

As game developers, what do you think about the Steam Deck?

David: We’re quite excited about the Steam Deck as it's all about player freedom. Freedom in the way you play - Factorio and Total War from your couch? hell yeah! - and freedom in the way you access your content since you are not tied to a specific storefront. For developers, this means expanding your game audience, new ways for players to enjoy your games. That's always a good thing.