Apple’s Online Store Will Be Unavailable Tomorrow Due To ‘Maintenance’

Apple's System Status page has been updated that indicates that its online store will be unavailable tomorrow, Tuesday, March 21 due to 'maintenance' between 3:00 a.m. and 8:30 a.m. Eastern Time. It naturally generates speculations that the unavailability of the online store is due to the fact that Apple is rumored to launch new products. Let's dive in to see some more details on the subject.

Taking facts into considerations, Apple usually issues press releases at the same time, 8.30 a.m. Eastern Time. Henceforth, if true, Apple could likely introduced new products as early as this week. Apart from this, there were also other sources that suggested that Apple could possibly launch new products this month.

However, at this point in time, we have no news what products could the company be planning to release. If the news has any weight to it then we will find out shortly what the company has in store for users.

Even if there is no official word from the company about the release of any products, there have been several rumors lurking the rumor mill. Previous rumors have heavily emphasized that at least three new iPad models will be unveiled this month. This includes the all new 10.5-inch iPad with minimized bezel size. Apart from this, the 9.7-inch iPad Pro along with the 12.9-inch iPad Pro are expected to be updated as well. 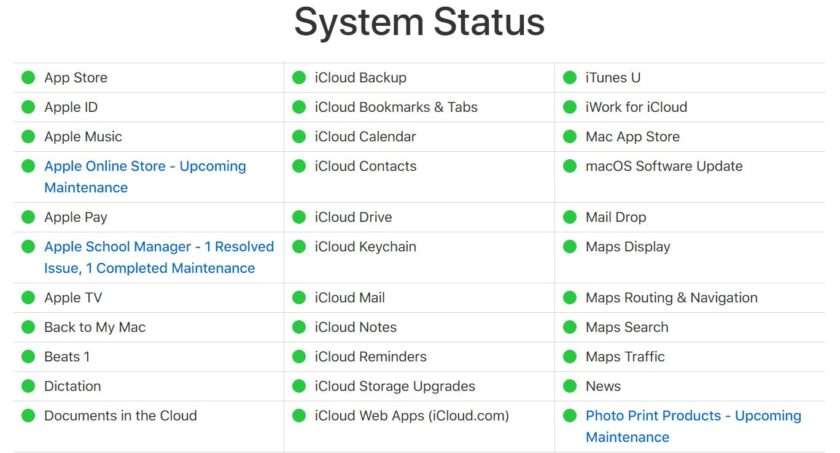 In addition to this, Mac Otakara, a Japanese blog suggested that the Cupertino giant will throw a March event to introduce its all new iPad Pro lineup. Other than just the iPad, the source also claims that Apple will also debut a bigger iPhone SE model with storage capacity bumped up to 128GB. New Apple Watch bands and a red color for the iPhone 7 and its bigger variant is also expected to be announced.

At this point in time, the rumors and reports seems highly unlikely as the month of March is already more than a half way through. Nonetheless, we can sure hope that the company will surprise us with a handful of new products and updates for its existing lineup.

The company's System Status page does not represent any foreseeable product(s). However, it is possible that the company could possibly release new products. There will be more to the story, so be sure to stay tuned with us.

This is it for now, folks. What are your thoughts on Apple's online store page going down for maintenance? Do you think Apple is planning to release new products? Share your thoughts in the comments.