Apple Watch Shipments Register a 50 Percent Annual Growth in Q1 2021, as It Captures One-Third of the Market, but Not Without Some Competition 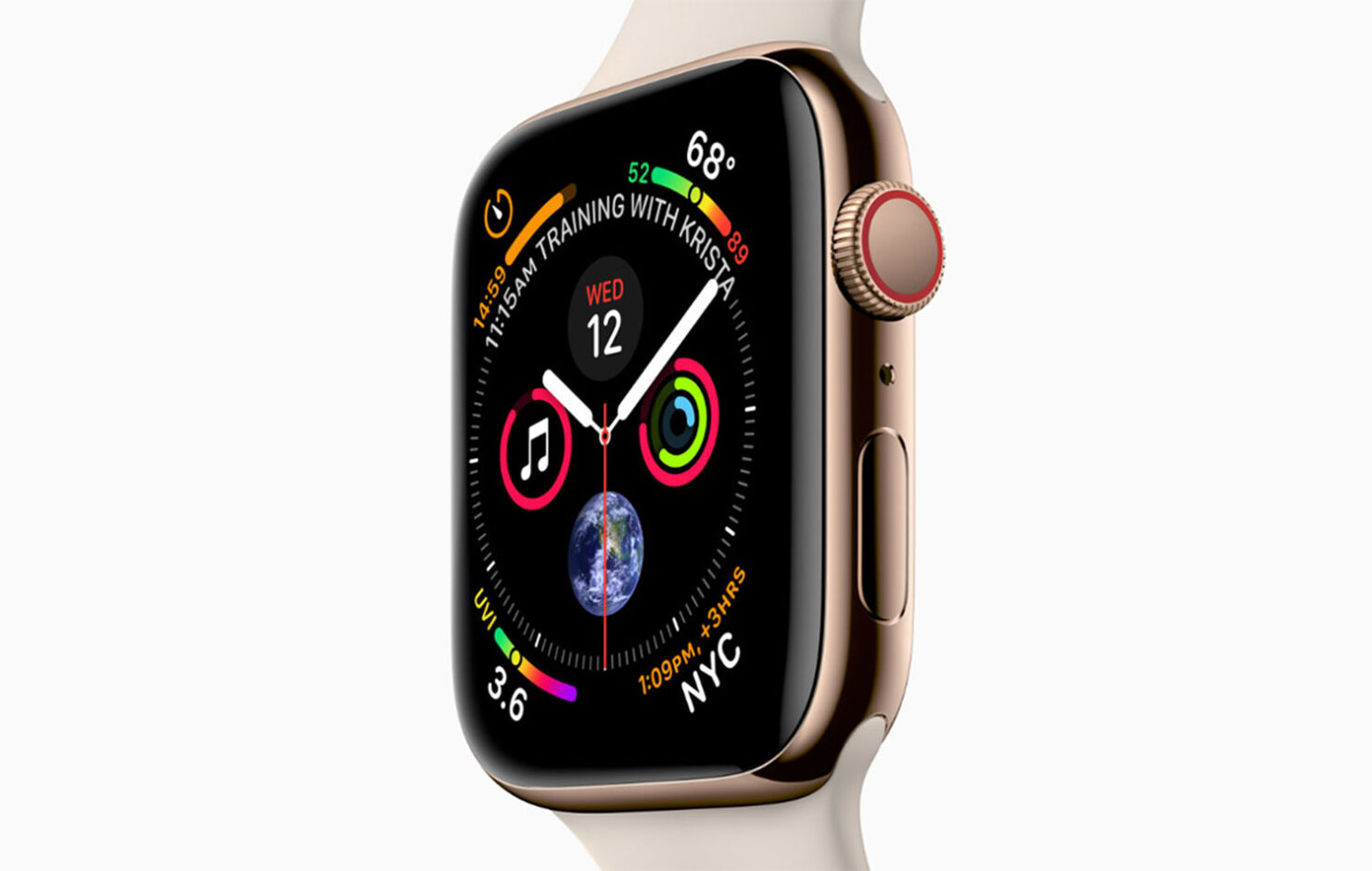 A new report by Counterpoint Research says that global smartwatch shipments rose by 35 percent in Q1 2021 year-over-year. For Apple, it was the same scenario as the technology giant retained its position as the leader, causing overall growth of its Apple Watch line by 50 percent year-over-year as demand for the Apple Watch Series 6 increased. The company also saw its market share increase by 3 percent as compared to the year-ago quarter to 33.5 percent this quarter.

Samsung and Others Are Giving the Apple Watch Some Competition, but It Will Take Some Time Before That Market Share Drops

On the other hand, Apple’s global competitor, Samsung, saw its shipments rise 27 percent year-over-year, though the South Korean vendor’s market share went down a little bit. Senior Analyst Sujeong Lim has commented that the Apple Watch captured one-third of the market, and it was not just thanks to the Apple Watch Series 6, but also the Apple Watch SE.

“Apple was able to further solidify its leadership position in the market by widening the portfolio from Watch SE to Series 6 at the right time. Hopefully, Google’s new Wear platform will be shipping in the next generation of the Galaxy Watch series in late Fall. It will be good for the companies involved.

The focus would be to not only improve performance, such as battery life, but also improve on the AI, newer apps and services, and integration with Android smartphones. Samsung will also be able to better target the broader Android smartphone user base. With the completion of the acquisition of Fitbit, Google should be able to enhance the Wear platform with ‘fitness’ capabilities and services integration, moving forward.” 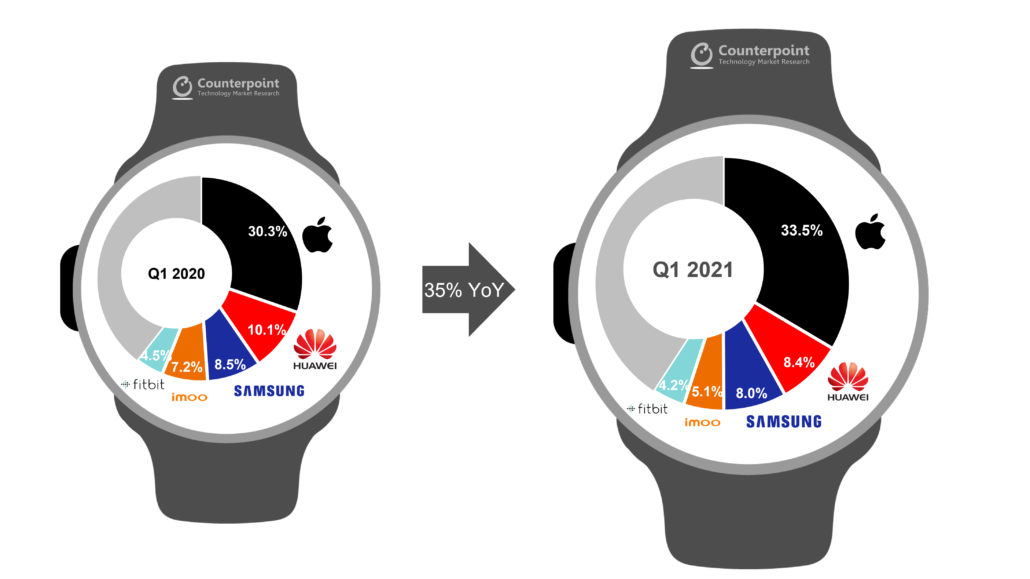 watchOS was able to attain this market share due to its billion iPhone user base. Sadly, Google’s Wear OS platform has not seen this much recognition as most of the major smartwatch brands have developed and installed their own proprietary operating systems. This may change as Samsung and Google announced at Google I/O that they would be switching to a single unified smartwatch platform, most likely to compete against the Apple Watch more effectively.

Focusing on why there is so much excitement for wrist wearables among tech companies, Vice President Research at Counterpoint Neil Shah said the following.

“Wearable devices and services are going to become important for companies such as Apple, Google, Facebook and Amazon as they increasingly expand their reach in healthcare, pharmaceutical and insurance verticals directly or indirectly. This can include selling services such as Apple Fitness+, predictively cross-selling medicines and healthcare solutions, or attracting marketers to their ad platforms based on the health profiles built with the enormous amount of data generated via the number of sensors on these wearable devices. Further, the addition of advanced voice AI and ML capabilities on these devices will make wrist as one of the key segments technology companies will go after this decade before adding eyes/brain-based advanced wearable devices to the mix.” 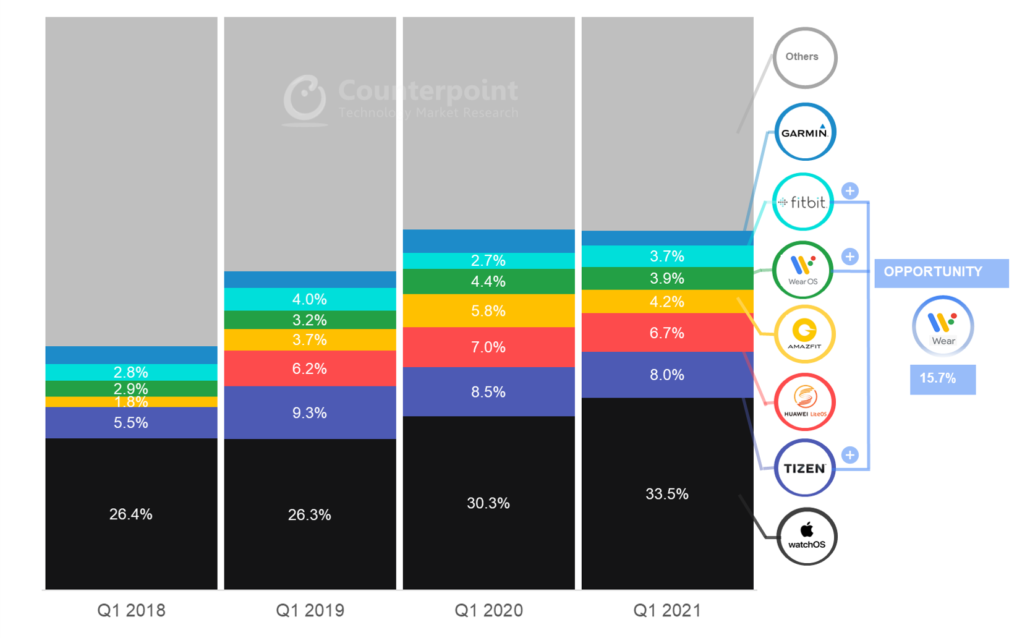 Apple is said to introduce a redesign to the Apple Watch that includes flatter edges, making the wearable appear more in line with the company’s current family of products such as the iPhone 12 range, iPad Pro, and the M1 iMac. A change-up in design, coupled with more features, should make for a compelling selling point for customers and aid Apple in maintaining that market share.