“The interview”, a movie released by Sony a few days ago, subsequently after a lot of dispute and controversy. This comedy movie casted Seth Rogen and James Franco which was allowed streaming on Xbox Movies, Google Play Store, SeeTheInterview.com and the YouTube. Also to select movie theatres and online video distributors. 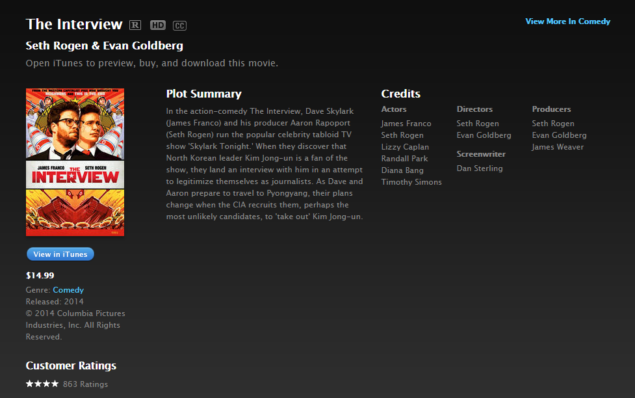 "The interview" now available on iTunes

Apple decided to reconsider its decision to stream "The Interview"

As per the reports, Apple declined Sony’s offer to stream “The interview” on iTunes on Tuesday when Sony approached them for streaming their movie on the release date. The New York Times also reported how the Cupertino Company seemed not interested at all specially during the speedy timetable, according to the company when Sony asked for the streaming of “The Interview”. Apple however is making The Interview available for buying and renting out for US customers only.

Although it appears to be the disinterest of the Cupertino Company, one possible reason of the decline to the offer by Sony could be the other way, one that it didn't want the iTunes Connect holiday freeze which is official till 29th December 2014 to be troubled. As reported by Re/code:

The move means Sony can fill a conspicuous hole in its online distribution strategy for the movie. Since Wednesday, the film had been available via Google’s Play and YouTube stores, Microsoft’s Xbox, and Sony’s own site.

Apple made “The Interview” available at 5.99$ for rent and at a $14.99 purchase. As reported by Re/code what Apple Stated to it while making this movie available on iTunes:

We're pleased to offer "The Interview" for rental and purchase on the iTunes store.

This movie was released by Sony after a lot of controversy and dispute even after cancelling its extensive dramaturgical release several times because of the threats by potential intense hackers to attack the theaters displaying the movie. That too, because the movie showed two journalists trying to assassinate North Korean leader under CIA assistance. However it is based on comedy, this headed hackers to steal data by hacking into Sony pictures and made numerous internal memos and email publicly available. Sony later announced that this movie alone triggered a gross of $1 million in ticket sales on Christmas day alone. This figure is expected to increase as iTunes now made it available too. Re/code reports:

It took Apple a few days, but it’s joining the club: Starting today, iTunes users in the U.S. and Canada and rent and purchase “The Interview”, Sony’s controversial comedy.