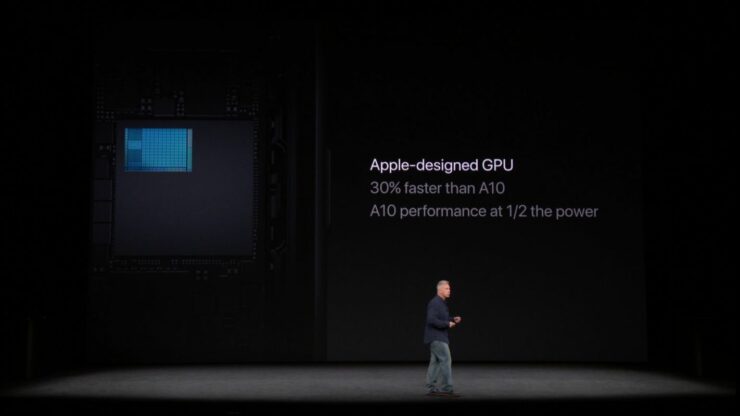 Editor's note: Most of these improvements can be gained by simply shifting to the new 10nm process.

One of the most significant announcements of the September 12 Apple event was the company’s self-designed GPU – yet it was the announcement that got the least amount of applause. It is clear that the audience did not immediately get the ramifications associated with Apple designing its own GPU featured on the A11 chip. Without any sort of exaggeration, I can say that it was probably one of the most important unveils of the event (yes even more important than the iPhone X) if not the most important.

The nuances of GPU IP and the implications of Apple NASDAQ:AAPL re-inventing the wheel

Why you ask? Well, because a GPU is one of the critical parts of any smartphone and protected by a crisscrossing mesh of hundreds if not thousands of IP patents all held by only a handful of companies. Making a “new” and “self-designed” GPU would be akin to saying we have “invented” a new wheel. The fact that all modern GPUs need to have universal components and design (for any modern API to take advantage of them, including Apple’s own Metal API) makes the “fundamental” building blocks of almost all GPUs similar in nature. In fact, it is so difficult (if not impossible) not to tread on each other’s toes that all big names either have IP ranging back to the 1990s and early 2000s or have cross licensing deals in place that prevent them from suing the other for IP infringement.

To be clear, I am not saying that Apple did not design their own GPU, I am saying it would be almost impossible for them to design anything resembling a modern GPU and not infringe on existing GPU IP. The way to move forward (without any risk of a lawsuit) would be either to acquire said IP by purchasing a company or by engaging in a licensing agreement with a company that already owns it.

Here’s where the story gets more interesting. The last iteration of Apple’s iPhone was using the GPU made by Imagination Technologies LON:IMG, specifically the PowerVR Series 7XT GT7600. In fact, they have been making these GPUs for Apple ever since their agreement in 2008. Recently however, the company stated that it would be stopping its use of all Imagination Technologies IP within the next two years and has basically dumped the company leading the company to lose almost half of its value in the market and the board of directors putting Img Tec up for sale. Here is a simple fact though, unless Apple has invented something completely alien, revolutionary, and utterly different from all modern variations of the word ‘GPU’ it will actually be open to IP infringement going forward.

Before we go any further, let me answer an obvious question: If Imagination can make GPUs, why can’t Apple? Well, the answer to this is quite simple. Imagination’s IP cover extends back to the late 1980s which includes a cross licensing agreement over its PowerVR portfolio with NEC in 1995. Since then the company has worked on building its own graphics portfolio to the extent that it was able to enter into a cross licensing deal with Qualcomm (2011) which includes Img Tec's PowerVR graphics.

Qualcomm on the other hand, once again had their own IP in place since the early 2000s and also received additional protection when they acquired AMD’s Handset division as well as all related IP (which itself extends back into the 1990s) in 2009 not to mention the cross licensing deal with Imagination Technologies in 2011 – and they still got sued by NVIDIA!

So what happens now? Potential lawsuit or deal behind closed doors

I hope you can see the pattern forming here. All parties that can design and manufacture GPUs without consequence have an IP cover in place that usually extends back into the 1990s or traces back to NVIDIA or AMD. In fact, one of the reasons that Qualcomm won the NVIDIA V Qualcomm battle was because the latter had acquired IP cover from AMD in 2009.

But, wait Apple has been designing their own CPUs? Why can’t it design its own GPUs? Well that is an excellent example to talk about. It actually has the prerequisite IP cover in place. Apple acquired its own IP (which it would later build upon) when it acquired star startup P.A Semi for $278 Million in 2008 within a month had a secret cross licensing agreement in place from ARM holdings to manufacture ARM compatible CPUs making it one of the few companies in the world with that right. With the talent from P.A. Semi designing their new chips and the ARM license acting as IP cover, they quickly achieved their own brand identity with the Ax series of processors.

So while Apple can design its own GPUs, if it does so without any IP cover, it will be open to a lawsuit – one which Imagination Technologies will happily provide.

If Imagination Technologies takes Apple to court, it will have to prove that its new GPU is a “fundamentally” different creature than the PowerVR (7XT and older) architecture. In other words, it will have to basically prove that their wheel is not a wheel, ie an almost impossible task.

Since it is no longer protected by the IP cover provided by Imagination Technologies, the company has 3 choices:

Vigilant readers will probably remind me that Apple has already denied rumors of a possible acquisition of Imagination Technologies but the company actually has a precedent of pretending to end a relationship and then swooping in to acquire at a later date (it’s perfectly legal). In fact, in the case of their CPU division, the company actually ‘apparently’ had ended relations with P.A Semi before swooping in to buy it out.

I think we can safely say that if a deal behind closed doors with Imagination Technologies hasn’t happened yet, we will be seeing them taking Apple to court soon enough. But what if Apple somehow manages to win? Will giants like NVIDIA and AMD exert their IP? Probably not. To quote AnandTech Editor Ryan Smith, GPU patents are a form of MAD (Mutually Assured Destruction) and unlike Imagination Technologies, companies like AMD and NVIDIA have a lot to lose and will probably not want to enter into a fight way above their weight class.