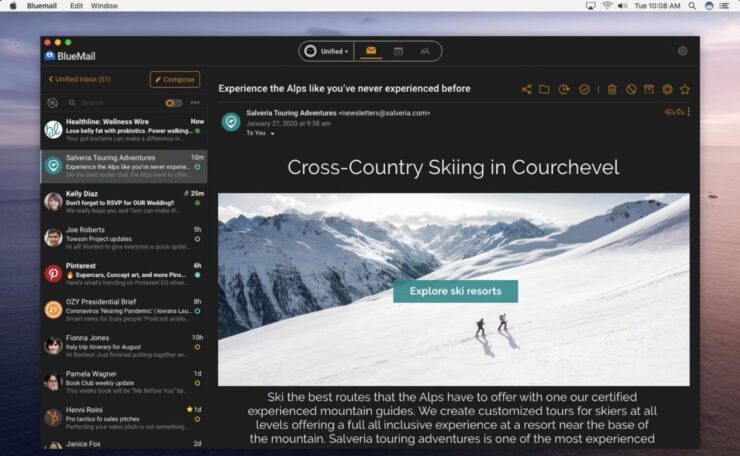 After eight months, Apple has restored BlueMail to the Mac App Store. The restoration comes just after an open letter was published by BlueMail co-founder, asking small developers to fight against Apple.

BlueMail’s restoration on the Mac App Store coincided with the open letter that was posted by Dan Volach, co-founder of Blix, parent company of BlueMail. The open letter calls out small developers to support BlueMail to fight against Apple. Dan also mentions that his brother wrote a letter to Tim Cook, and heard back within a few hours.

We were overjoyed when we heard back from Apple within the day – within just a few hours in fact. It seemed to share our desire for a mutual solution and we worked quickly to meet its requests, but these too were just tactics meant to delay us.

However, as per Apple, the app was removed because it broke App Store guidelines. BlueMail’s app was causing security and privacy warnings to appear, because the app binary changed its bundle ID every time it launched. In a statement shared with MacRumors, Apple said that BlueMail’s solution did not comply with macOS’ security protections.

BlueMail was proposing to override basic data security protections which can expose users' computers to malware that can harm their Macs and threaten their privacy.

The company submitted a new binary to Apple on February 7, which was approved by Apple within a few days. This bit of information is missing from Dan Volach’s open letter.

In a statement provided to us by Blix, this new binary is mentioned. Blix claims that the new binary did not resolve any of Apple’s concerns with regards to notarization and hardened runtime. These are requirements that Apple asks every developer to follow.

Apple had shown little willingness to resolve the issue, providing shifting explanations as to why the app was removed from the app store and why it could not be restored. On February 6, Blix submitted an updated version of BlueMail. Although this update did not address many of the unjustified shifting explanations Apple provided over the last eight months, including notarization and hardened runtime, it was quickly approved, demonstrating the effectiveness of public pressure.

Because Apple was treating BlueMail just like any other Mac App Store submission, it wanted the app to follow the same guidelines. BlueMail’s perspective is that their updated app still does not follow the Mac App Store guidelines but it was still approved.

With BlueMail restored, Blix has no intention of dropping its legal case against Apple, which extends beyond the removal of BlueMail on the Mac App Store to the suppression of its iOS app and the infringement of Blix’s patented technology through “Sign in with Apple.”

A Storm is Brewing for Apple

Apple’s “Walled Garden” comes with a few rules but it also provides a lot of benefits to developers and users. Issues between developers and Apple are not new but they have been reaching new heights. The United States Justice Department has been reaching out to app developers to investigate anti-competitive behavior by Apple. Changes in APIs and App Store policies have proved to be fatal for many apps in the past, which has sparked hue and cry from the developer community.

Companies like Tile have testified against Apple in Congress because of privacy changes in iOS 13, which break smooth functionality for Tile’s product. App developers believe that Apple is using these privacy changes to stifle competition on iOS. Breaking a competing product’s functionality, in the case of Tile, just before launching its own (AirTag), seems suspicious. However, since Tile’s congress hearing, Apple has back tracked on these changes with updates in iOS 13.4 beta.

Whether Apple’s changes in iOS 13.4 will be enough to make Tile and other developers happy ie yet to be seen, but one thing is for certain, Apple has work harder on improving its relationship with upset developers and take their input before implementing API and policy changes in iOS and macOS.