Numerous reports are coming in from iOS users facing issues with updating or installing apps from App Store. These Apple ID error messages are being reported by both the U.S. and international users. While Apple has not yet confirmed these reports of Apple ID error messages on its system status page, users report that Apple representative confirmed the issue being with Apple's servers. 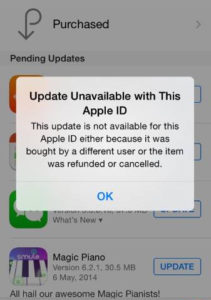 According to MacRumors forums, following error message comes up when users try to update apps on their iOS devices:

This update is not available for this Apple ID either because it was bought by a different user or the item was refunded or cancelled.

The user shared this message by the Apple Support rep who has confirmed the issue with servers:

At this time, this issue that you’re experiencing with updating apps is being investigated. There are no possible fixes at this current time, as [it's] an issue with our servers, but we are working on it and should have it functioning properly later today

MacRumors has shared some of the user reports of Apple ID error messages:

"I go 4 app updates today and as soon as I clicked the update button, the App Store app popped up with the following message:

"Update Unavailable with this Apple ID - This update is not available for this Apple ID either because it was bought by a different user or the item was refunded or cancelled."

I have always used a single Apple ID and this phone (5S) was bought new and have never had this problem in the past." - Vinamra

i didnt change or log out from my apple id at my iphone 5. But when i wanted to update one of my apps it said "update is not available for this apple id either becuase of using different id or...." then i checked my apple id's apps and most of my apps gone. what should i do to make them back to my apple id account? and i tried to delete those apps and redownload them but it gave the same message. - Albertus8898 on Apple Support Forums