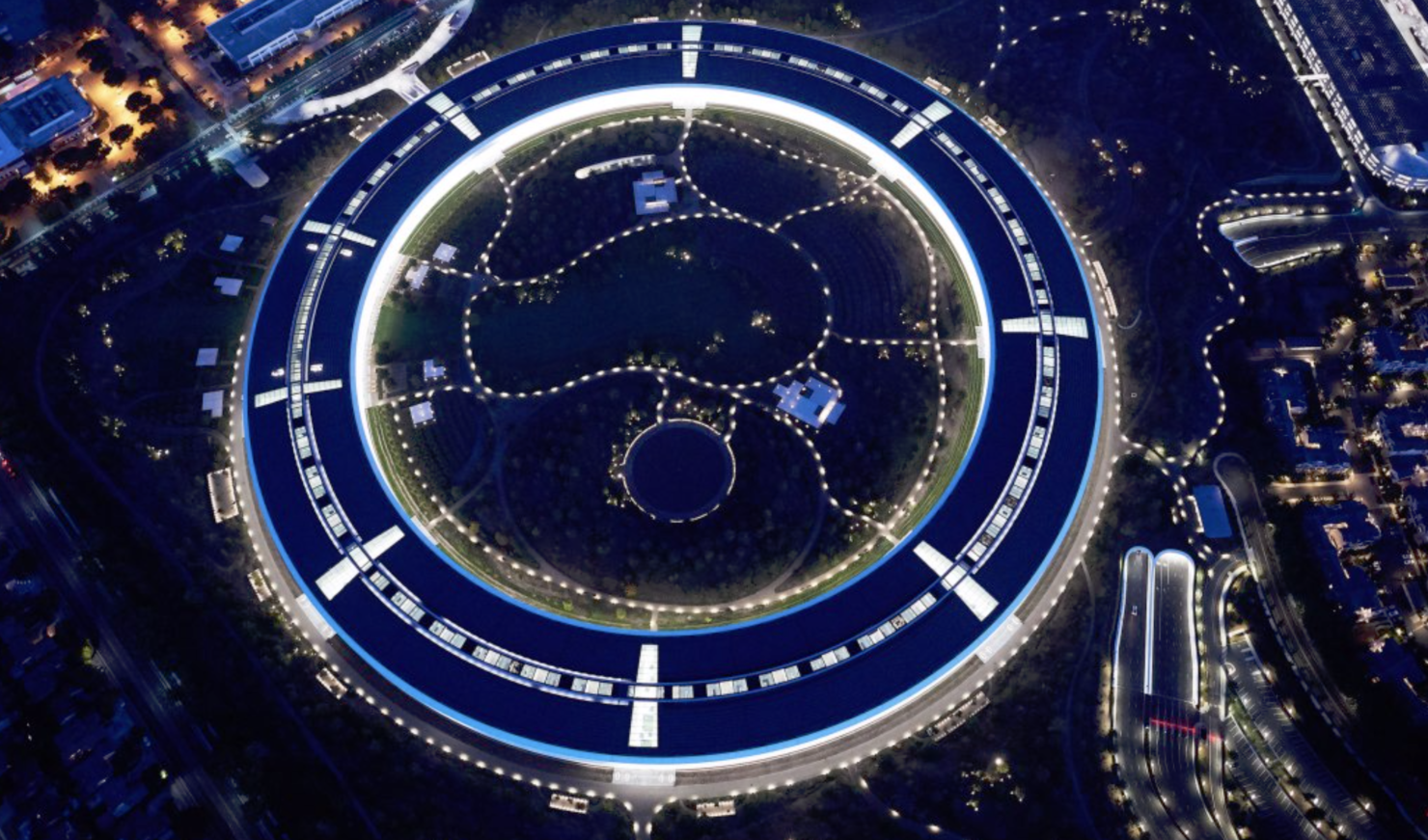 With the iPhone having reached maturity over the last decade, Apple (NASDAQ:AAPL), which had reached staggering heights in terms of revenue and market capitalization solely due to the fact that it had revolutionized the smartphone form factor and made it appealing to the mass market, understood that the next growth opportunity lay elsewhere.

Having morphed more into a hardware company due to the high margins that gadgets such as a $1,000 iPhone offer, the Cupertino tech giant started to diversify its product portfolio to cater towards middle-tier devices too - in an attempt to milk more out of hardware sales.. At the same time, the growing iOS ecosystem and the inculcation of financial transactions through software (a reality absent from the post-1999 tech boom) provided Apple with the ability to create an ecosystem.

A study that the Cupertino tech giant released today quantifies the total spending on the iOS app ecosystem conducted through iOS apps. Naturally, this gives the sense of a larger perspective of the economic worth of the platform maintained by Apple. Of the half a trillion-dollar spending in the ecosystem in 2019, sales of physical goods and services accounted for four-fifths (or 80%) of the pie. Following these, spending through digital purchases governed by products such as gaming applications and ebooks resulted in $65 billion changing hands and $45 billion in spending for gaming and non-gaming related advertising.

Emphasizing a key post-COVID 19 reality of China's importance in global commerce, the data gathered by Apple and its researchers reveals that the East Asian giant generated $224 billion or 48% of the total economic activity. Yet, owing to the fact that most of this activity occurred via physical goods and services, Apple was unable to monetize this lion's share as effectively as it could the sales originating from the United States, Europe and other regions. 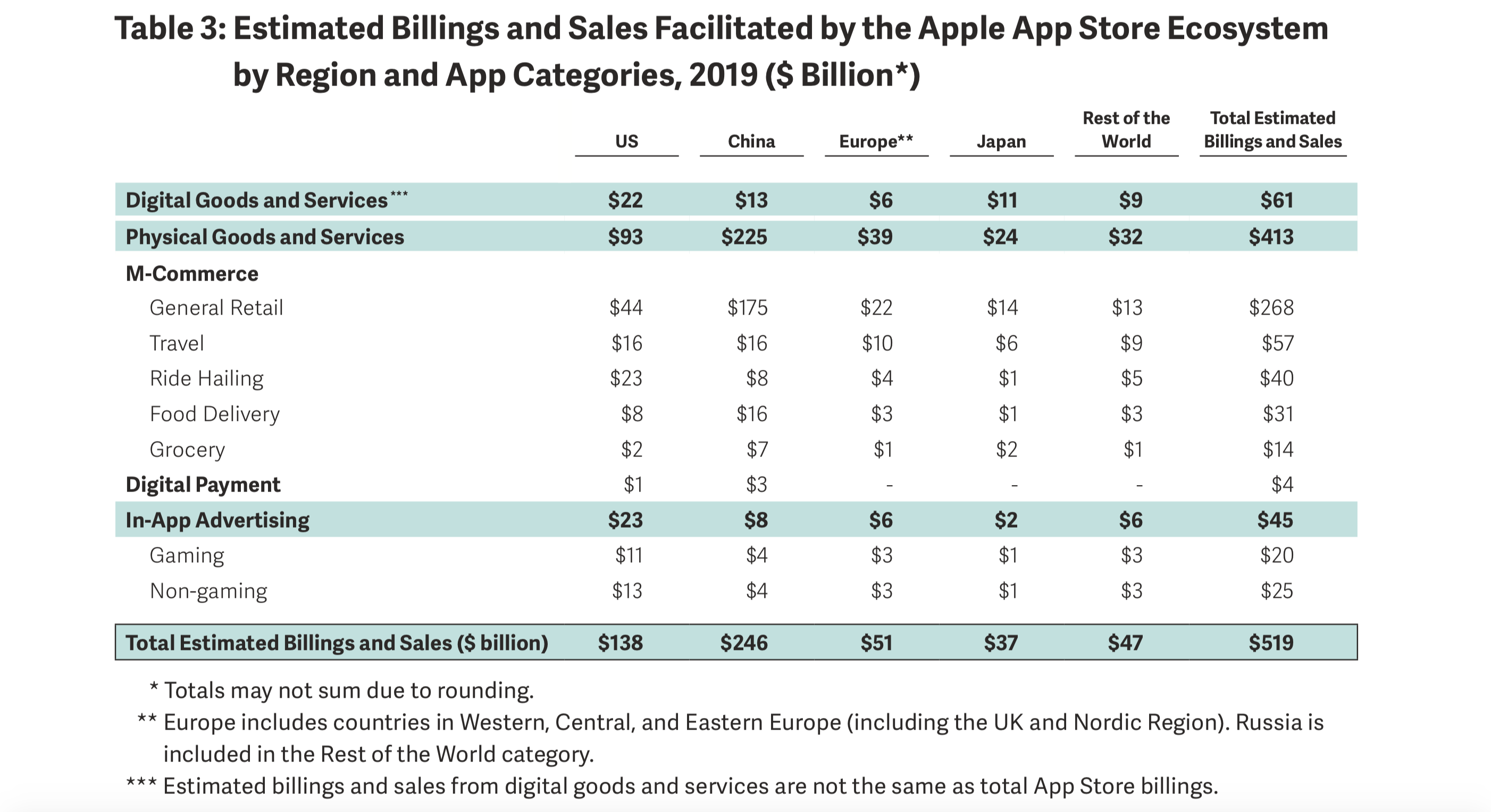 Apple App Store Economy Should Witness Growth in Physical Goods and Services Sales – But Can the Company Profit From This Growth?

Naturally, the $519 billion spending estimate is staggering considering that during its fiscal year 2019 that ended in September, Apple generated $260 billion in net sales. The authors of the study, Analysis Group, caution that despite this, readers should keep in mind that research divisions of other firms have previously suggested that the total value of the digital commerce economy far exceeds today's half-trillion estimate. For instance, they cite Deloitte's estimate of iOS and Android spending in 2018 being worth $260 billion only inside the United States.

Looking at today's global environment, it's difficult not to consider what changes the coronavirus will have on the aforementioned App Store economy. Conditions ushered in due to lockdowns, social distancing and travel suspension protocols have affected some categories of application use positively and others negatively. Examples of the former include greater utilization of services offered by digital applications of big brands including Amazon (NASDAQ:AMZN)and Target (NYSE:TGT)and a reduction of those offered by applications belonging to entities such as airlines and hotels. 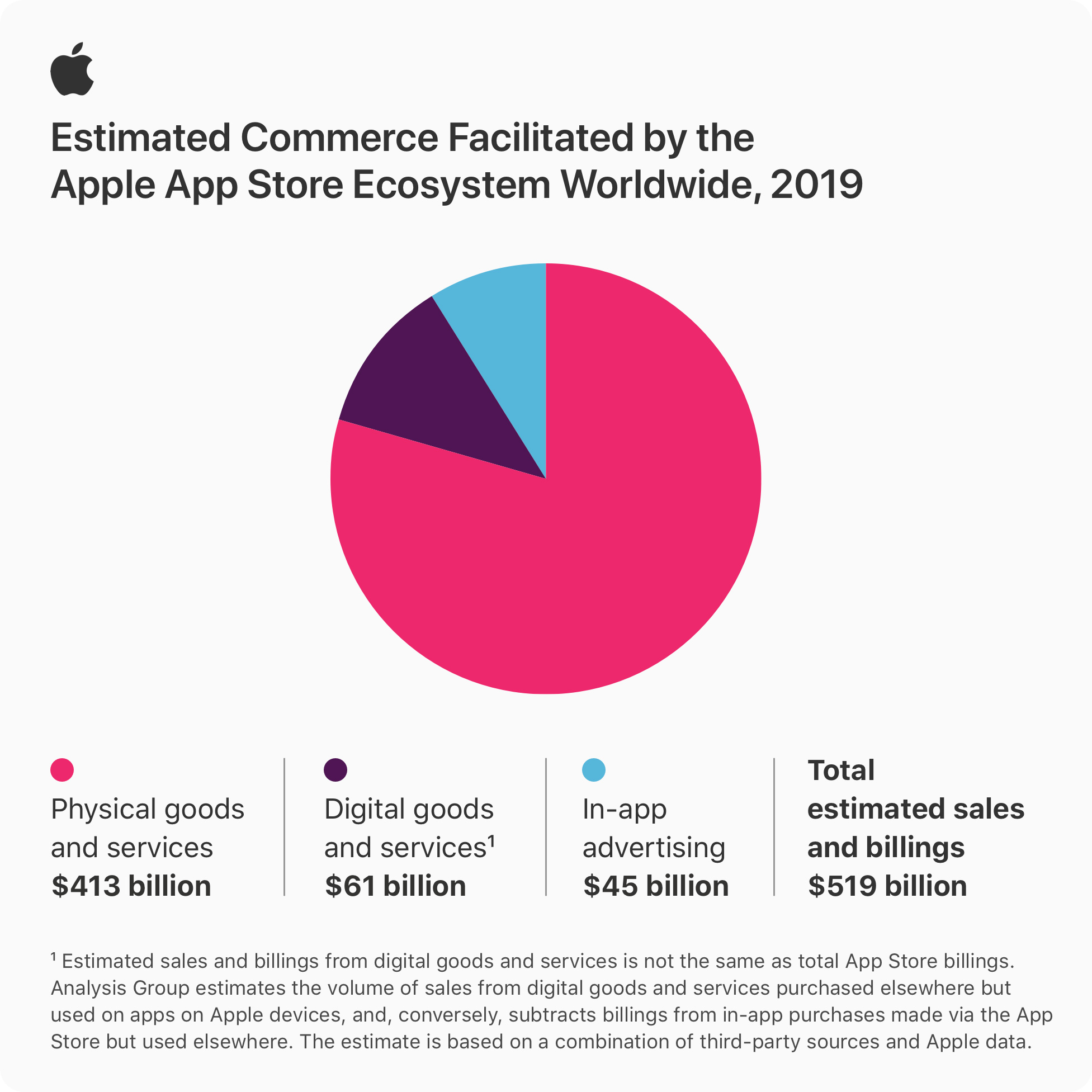 Apple reveals that Physical Goods and Services, or those on which it does not earn a commission, accounted for 80% of the total spending through its iOS applications in 2019. (Image Credit: Apple)

Spending trends in North America indicate that retail giant Amazon's importance in the global economy has cemented, so it's entirely possible that spending for physical goods and services in North America will rise. Yet, Apple will be unable to profit from this owing to the fact that the company does not charge a commission for products bought and sold in these categories.

The biggest chunk of monetization for the company is through luxury applications that facilitate dating, music streaming, fitness and magazines. Additionally, the fact that the App Store economy is touching half a trillion U.S. dollars in value cements the need for the company to earn more from its ecosystem in the current time of crisis.

Only then will Apple be able to handle the shift towards education and productivity-related purchases from luxury spending that its gadget lineup is experiencing and will continue to experience due to the changed post-virus global dynamics.