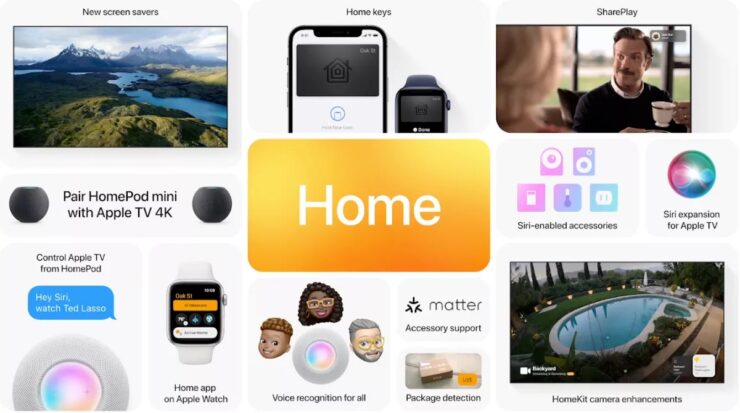 Apple hosted its annual WWDC 2021 recently and unveiled a plethora of new upgrades for its existing apps while announcing a boatload of new ones. Apart from iOS 15 and iPadOS 15, Apple is being a wide range of smart home features to the HomePod mini, Apple TV, and Apple Watch. In addition to this, the company has also seen fit to bring Siri to third-party accessories. Scroll down to see more details on the new updates.

As to begin with, the HomePod now supports commands for the Apple TV. What this means is that you can simply use your HomePod to navigate through the Apple TV's interface. In addition to this, Apple's new SharePlay also works with Apple TV, and tvOS gains the new Shared with You section as well. Furthermore, there is a new All of You tab available on the Apple TV app which will recommend shows and movies that are suitable for all users on the device.

The HomeKit accessory manufacturers now have the option available to integrate Siri voice control for the very first time. The first third-party Home accessory will be available later this year which will be equipped with support for Siri enhancing Apple's efforts at home. In addition, Apple is also bringing voice recognition features on the HomePod for multiple users. This will allow the HomePod to respond to different users in their own preferred way.

Furthermore, the Apple Watch now has a dedicated Home app that can perform its own set of functions like turning the lights off in a specific room. Moreover, the Home keys will work with your Apple Watch for unlocking purposes and accessory makers will take advantage of the support through various means. Apple has also added the ability to pair the HomePod with Apple TV 4K, allowing you to set it as a sound output device.

This is all there is to it, folks. We will share more details on the platform as soon as we have a word. Share your views with us in the comments.