What an amazing day it has been. Many Apple products that were expected to be released today were finally officially announced by the company in California. The new iPod Nano is one of those products. The iPod models had not been updated for quite a while now and it is about time that new ones were released. The iPod Nano has certainly gone through many changes. Lets just go through each and every change to see how the new Nano stacks up against its predecessor.

The most prominent of all changes is the design. The iPod Nano has an all new design, or as Apple puts it, the iPod Nano has been completely renanoed. The display is larger and wider than the previous iPod Nano, which is a good thing nonetheless. The display is 2.5 inches and its multitouch. It is surprisingly quite thin at just 5.4mm, being almost 38% thinner than the previous iPod Nano. The left side houses volume buttons, easily accessible for changing volume levels during use.

A nice addition to the new iPod Nano is a Home button, the same kind we get on the likes of iPod touch and the iPhone. The function of this Home button is the same, whenever its pressed it takes you to the main grid of app icons. There's added support for video playback. FM Radio is present as ever now with the ability to pause and play. The new iPod Nano also comes with Bluetooth support, won't work between devices but is great for using wireless headsets. 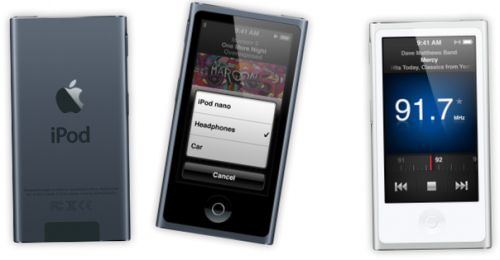 The Nano has a Lightning dock connector which doubles as a charging dock as well as a dock for high speed data transfer. The New iPod Nano is offered in seven different colors. It will retail at $149 and will be available in October.

Apple Has Officially Discontinued The iPod Nano And Shuffle, Reduces Price Of The iPod Touch