Samsung Loses Out As Apple A9X Is Manufactured By TSMC

As we head into 2016, things have evolved quite a bit in the mobile world. Samsung's managed to gain the top place when it comes to hardware manufacturing, aside from offering top tier market solutions in the form of the Exynos 8890 as well. In fact, this September, the launch of the iPhone 6s and the iPhone 6s Plus came with a processor manufactured by two foundries - Samsung and TSMC. While performance differences between the two are a separate debate, Apple hasn't fully gone the Samsung way as we learn today.

The Apple A9X Is Manufactured On TSMC's 16nm FinFET Process

One of the main reasons behind Apple's choice of dual foundries for the A9 this year was supply and demand. With the amount of iPhones that Apple ships every quarter, TSMC's facilities were rather limited to cope with such massive demands. Therefore, Apple had to turn towards Samsung as well, to ensure that no supply constraints would occur after the iPhone's launch and subsequent release date.

But with the iPad Pro, the company wasn't facing any such issues and subsequently decided to stick with TSMC. Or at least that's what today's information brings us. What makes us think that? Well, our friends over at Japan have decided to do some digging around in the matter, and what they've managed to uncover does make a fair argument for the fact that the A9X is indeed manufactured by TSMC. 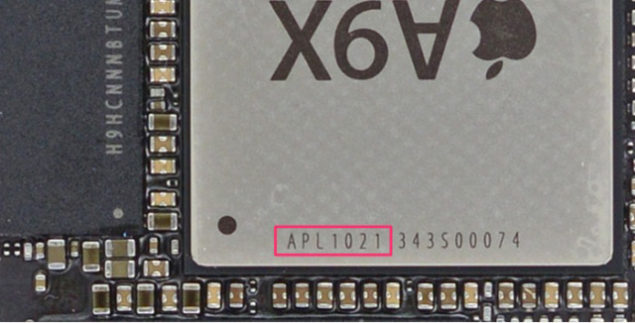 Starting from the first image of this post, we see that according to iOS 9's IPSW, there is only one processor listed for the iPad Pro. If you were to take a look at the one for the iPhone 6s and the iPhone 6s Plus, you'd see that it lists the devices with two processors, which is common knowledge by now. Taking a step further, and moving twoards iFixit's iPad Pro teardown, we're able to see that the model number for the A9X is APL1021, which leads us to the third piece in the puzzle.

Historically speaking, Apple's processor orders which have been manufactured by TSMC generally come with identification numbers in the range of APL10xx. When we take a look at the ones coming from Samsung's end, they come with numbers in the range of APLxx98. So it really becomes clear at this point that the A9X is manufactured by TSMC indeed, which has been Apple's favored manufacturer of choice over the past couple of years. Thoughts? Let us know what you think in the comments section below and stay tuned for more.