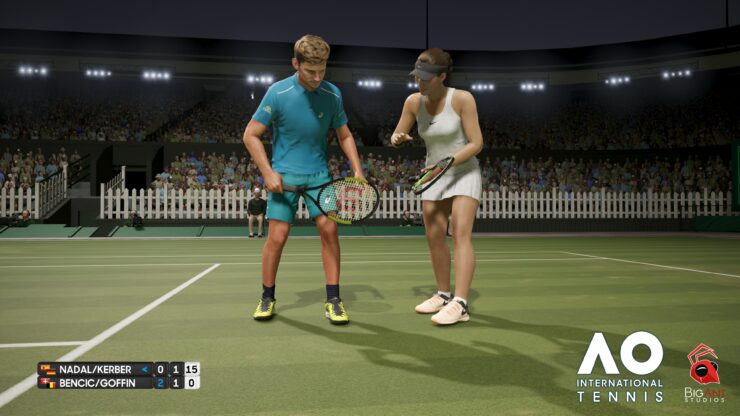 AO International Tennis from Big Ant Studios (Ashes Cricket) will be the first in a trio of tennis titles due to be available globally by June, the other two being Tennis World Tour and Mario Tennis Aces.

The game actually launched as AO Tennis during the Australian Open, but only in the Land Down Under. Now, though, it's about to be available everywhere else on May 8th for PC, PlayStation 4 and Xbox One.

We've interviewed Big Ant CEO Ross Symons on the enhancements made to this international release as well as some of the unique features of the game, chiefly the ability to create new players with your own face as well as creating new stadiums and decals.

AO Tennis received mixed reviews when it launched earlier this year on the Australian market. What kind of tweaks and changes did you introduce for the international debut?

It’s not so much “tweaks and changes” as AO International Tennis is genuinely a new game. It’s got
double the gameplay modes, far greater levels of customization, and a vastly improved gameplay
engine to what AO Tennis launched with. When people watch videos of AO Tennis and AO
International Tennis, they’ll see two very different experiences.

The advantage of launching AO Tennis during the Australian Open was that we were able to hear all the feedback from the fans and then really take it to heart in order to produce the tennis game that everyone wants, so moving from that game to AO International Tennis has been a great journey.

While you have a considerable experience making sports games, this seems to be your first tennis game so far. What kind of research did you make beforehand and how long was the game in development?

Tennis is a real passion for many of the Big Ant team. We’ve got people that watch every Australian
Open from the stands, without fail, every year (one of the joys of having our office a short walk from Rod Laver arena!). Other people on the team are dedicated tennis players or were seriously
competitive players when they were younger. There is a genuine passion for AO International Tennis within Big Ant, and tennis itself, a lot of our understanding of the sport comes from being students of it ourselves.

In addition, we’ve had the full involvement of Tennis Australia in the development of this game, and
who understands tennis better than the actual governing body behind it? Tennis Australia’s support for this game has been unparalleled, and it has really helped us with making sure our game stays true to the sport.

Does AO International Tennis gravitate more towards a simulation (e.g. Top Spin) or an arcade (e.g. Virtua Tennis) kind of game in your opinion? Also, is there any unique gameplay feature you were able to add?

It’s been so long since there was a major tennis release that we try not to compare AO International
Tennis to what’s come before. We believe players will expect something more than what they got
back on the PlayStation 2 and Xbox or early years of the PlayStation 3 and Xbox 360.
That being said, we are big fans of Top Spin, and love the idea of a serious simulation of the sport, as opposed to the more fast, fluid, arcade-like tennis games that tend to dominate. AO International Tennis is definitely a simulation and we wanted to create an authentic and realistic take on the sport.
As for unique gameplay features; we’ve put our comprehensive creation options into the game, lead by PlayFace, our own proprietary technology that allows a user to take a photo of themselves and stick that directly onto one of the game’s player models. This level of customization hasn’t been
available in tennis games previously. In addition to the player creator, users will be able to recreate
any stadium and any logo or costume they like, and then share those creations with other tennis
fans around the world.

Can you disclose how many licensed players and stadia will be available in the final game? Do you plan to add more through DLC?

Unfortunately, that’s not something we can disclose right now – but as I mentioned above, the
game’s effectively limitless in how many players and stadia will be available to tennis fans.

What is the extent of the online modes available in AO International Tennis? Will it be possible to bring the player character you created to play online? Are there rankings for singles and doubles? What about tournaments?

You will indeed be able to bring your player created players into the online mode, and there will be
both singles and doubles. There are leaderboards too, and we certainly encourage people to get
together with friends to create their own tournaments to find out who is the best AO International
Tennis player of all.

We have noticed that AO International Tennis is listed on Microsoft's official Xbox One X enhanced page. Can you disclose the technical specs of the game on Xbox One X?

AO International Tennis on Xbox One X has increased texture resolution and natively outputs 4k
resolution at a constant 60fps.

The game is also coming out on PlayStation 4, so we are wondering whether there will be PlayStation 4 Pro enhancements as well and if so, how they compare with the Xbox One X.

The PlayStation 4 Pro runs AO International Tennis at 1080p resolution with a constant 60fps along with increased texture resolution.

Is there a chance you might bring the game, or any of your other games in the future, to the Nintendo Switch console given its success?

We’re big fans of the Nintendo Switch at Big Ant and are licensed publishers for it, and indeed we
have development underway for other titles. At this stage, we haven’t got any concrete plans to
release AO International Tennis on the platform but it is being looked at.

With regards to AO International Tennis, would you like to make it into a franchise if successful and iterate on it with future installments?

We never approach as sports game as a “one-off.” We do believe firmly on building on each sport
over a number of years. Each sport has its own quirks and development challenges, and each sports community wants different things from games that depict their favorite sports. With that in mind, we develop unique engines and technology for each sporting game that we create, and it would be a little bit pointless to go to all that effort for a one-off.

Of course, whether we create further tennis games depends on factors such as commercial demand, but we’ve certainly gone into the development of this with every intention of making a long-term commitment to the sport.