PS4, Xbox One, PC version to be released at a later date

I want to be upfront about a few things here. The first is that cricket and I haven't been the best of friends, well, ever. My best fun with anything cricket was antagonizing pure cricket fans by making comments like "What is crickets?" or "Cricket? Isn't that the crap version of Baseball?” In other words, I'm a horrible person. This isn't to say I wasn't interested in Ashes Cricket and I've played my fair share of cricket titles in the past.

Indeed, Ashes Cricket isn't the first entry to cricket by Big Ant Studios. The team are the developers of two Don Bradman cricket titles, of which I have played Don Bradman Cricket 17. Outside of Big Ant titles, I've played a few Cricket games. The most memorable being the absolutely dire Ashes 2013 and the pretty decent International Cricket 2010. Generally, they never truly held my attention.

Fortunately, this isn't true for Ashes Cricket. Having moved away from the Don Bradman name, Big Ant Studios have partnered with the England Cricket Board and Cricket Australia to make the first officially licensed Ashes cricket since the monstrosity that was Ashes Cricket 2013 by 505 Games. Indeed, the best way to describe Ashes Cricket is much like the blurb given out by Big Ant Studios in that it offers cricket in "a more realistic and authentic way than ever before".

This much is certainly true in respect of aesthetic quality. Ashes Cricket benefits greatly from the facial capture of the licensed players of both the England and Australian cricket teams. In addition to this is painstaking detail for cricket grounds that feature within the game. The best example I can give is the North Sydney Oval or the Melbourne Cricket Ground, both of which I can compare the game to as I was recently there in person.

Indeed, what really sets the game apart from any previous cricket title is just how rooted in reality it is. Players actually move as they should thanks to Big Ant's in-house motion capturing studio. It shows when watching the finer movements of a batter, particularly in the slow-motion replays. Sadly, I can't say that this is the same when it comes to fielders. Quite often I found fielders moving in slightly unrealistic ways and more than a few times did they literally pass through each other. Had I not known better, I would say I was batting against a team of ghosts.

Further complications with movements came from fielders getting in the way of others, or simply acting unrealistically. For example, diving to attempt to catch a ball that was heading right for another who would have a considerably easier time catching it. I have, on rare occasions, also seen the odd teleporting ability by players too. These bugs are minor and rare, but noticeable when they occur.

What is a great thing is that Big Ant have moved slightly away from the more intensive controls of their last Don Bradman title. Previous titles have relied on the analog sticks when both batting and bowling. While this is still available in Ashes Cricket, a new "standard controls" system has been put in place. Effectively, your batting strike or bowling style is at the push of a button. The left analog stick is still used to direct your shot though.

For those who may be worried, this doesn't make the game too easy. Big Ant have considered this eventuality and included a variety of difficulty levels for both batting and bowling. The more difficult you have the settings, the more precise you need to be in both timing and selection. It's fortunate for me that this choice is there because when using classic controls, I'm frankly useless. I tend to miss the vast majority of balls that come my way and the ones I do hit go at the speed and intensity of a sedated sloth.

Bowling has also benefitted from a simpler control style. You select the type of ball you want to throw. Following this is the use of the left analog stick for inside/outside leg, with multiple options with the buttons to increase or lower speed, which has to be pressed in a little timing challenge.

What works best is just how weighty the game feels. Your choice of bat is directly reflected in the movement of the batter. You can almost feel the force as the bat and ball collide, the batter following through with his or her strike. Your joy as the ball flies past the fielders and reaches the boundary. That was a well-earned and excellent four. Sometimes even a six.

However, don't become too complacent as a result of the easier control options. Strong artificial intelligence is a nice feature of the game, where the computer learns from the decisions you make. I've found my opposition visibly changing fielding positions based on the strikes I tend to play. Of course you can use this to your advantage, placing a number of balls to the left only to then rack up a few decent runs on the right as the enemy has moved a few fielders.

What has come as a surprising but extremely strong addition is the customisation available. Big Ant have given you the ability to customise an extremely high number of things. Everything from your very own star to the members of a whole team, maybe you even want to make your own umpire? Moving away from the people of the sport, you can design your own bat or even stadium.

Of course the customisation has significant options in letting you create other teams of the world. As only Australia and England are licensed, making your own West Indies, South Africa and New Zealand may be a key part of the fun and realism of the game for you. Or, and this will be my idea, let somebody else do it and download it in the functional community hub. This hub features other people’s uploaded files and offers a simple way to search through them.

You also have a strong level of variety in the matches you play. Of course you are always playing cricket, this isn't Ashes Lacrosse. You're given a high level of control in setting up a tour, a T20 game, group of test matches and even more. These custom made matches add onto an already decent level of game types. The highlight of are the titular Ashes, both the women and men ashes.

In addition to this you can also go through your own career mode, using your own created star and rise up through the ranks. Starting at the very bottom of county cricket, earning SP which you spend on improving your own abilities. It's much like other sports titles with career modes, but a very nice feature as you create your own character to eventually rise up to be the best in English cricket.

Ashes Cricket has managed a few things. It's taught me a few things about cricket that I didn't know before. More than this, it's actually got me engrossed in the game itself. The level of customisation is excellent. While it's not the best looking game ever, it still looks great and the players actually look like they're playing cricket, not simply floating through relevant motions.

Sadly, this much can't be said for the commentary. Floating through is a rather apt way to describe it. All too often the commentators will chirp in by stating that a bowler needs to improve due to the opposition scoring a high number of runs. This number could be as low as five.

Despite my general apathy to the sport of cricket itself, I've found myself surprisingly enamoured with Ashes Cricket. While it certainly has a few bugs, it's a marked improvement from Big Ant and by far the best cricket game I've ever played. It's incredibly approachable, easy to pick up and play and fun to learn.

Played on Xbox One X and PS4 Pro during a press trip provided by the publisher. PS4 Pro copy played after the fact. 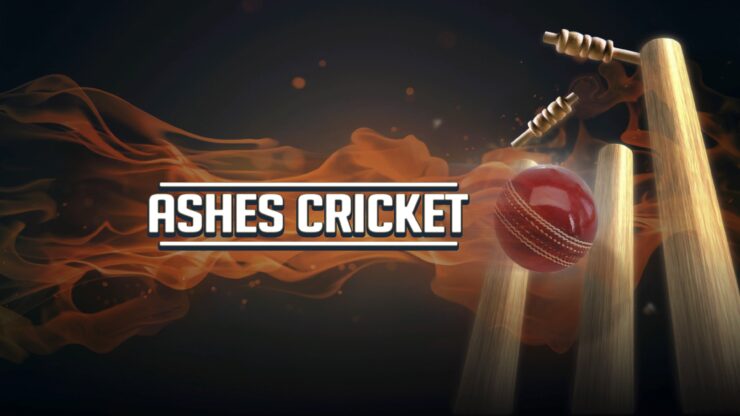 Ashes Cricket offers the very best cricket game so far. As well as being the most realistic, it offers more approachable gameplay to help draw you in and looks excellent, particularly the licensed players and major stadiums. While it has a few bugs here and there, it also features an extensive customisation system and a number of game modes. There's a lot to love and keep you engrossed.