Popular cyber activist group Anonymous has threatened Israel with an Electronic Holocaust, releasing a video with the vows of the war against the country. The massive cyber attack is in response to the "crimes in the Palestinian territories" planned for April 7 just a week before "Yom HaShoah", Holocaust Remembrance Day on April 16.

"We are unexpected" - Anonymous. 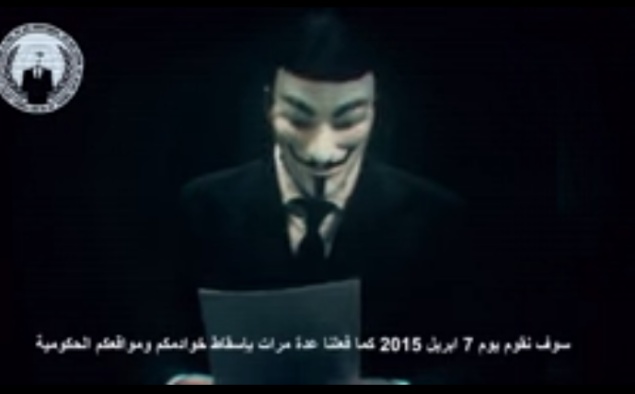 In a typical fashion, the message to Israel video has a masked figure in a suit and tie delivering the speech in electronic voice warning the country that the hackers group will eradicate Israel from cyberspace in this Op Israel attack.

"We will erase [Israel] from cyberspace in our electronic Holocaust, as we did many times, we will take down your servers, government websites, Israeli military sites, and Israeli institutions."

This has become a ritual for the group to attack Israeli websites and servers including the websites of Israeli prime minister, Bank of Israel, embassy of Israel in United States, and the IDF among others. These previous similar attacks have had the country some billions of dollars in losses. However, Benjamin T. Decker, senior intelligence analyst at Tel Aviv-based geopolitical risk consultancy The Levantine Group, claims that Israel has since strengthened its cyber presence taking in less damage every year from these attacks.

For the most part, this is posturing. This is actually the fourth year that Anonymous has carried out this Op Israel attack and called on their supporters to erase Israel from the internet. As the years have progressed we have seen that, despite their increasing sophistication in hacking techniques, we have seen less damage against Israeli cyber infrastructures, largely due to Israel’s pioneering of most cyber warfare tactics, both offensive and defensive. - B. T. Decker.

Anonymous video also includes a message for the security analysts claiming that the group still remains unexpected. During last year's Gaza conflict, the group pledged the #OpSaveGaza campaign to expose Israel's "terrorist activity to the world". In the conflict, over 2,100 Palestinian (1,585 civilians of which 530 children) and 72 Israelis were killed according to UN. The hackivist group also declared the Palestinian youth as "symbol of freedom" in the warning video.

"[Israeli government] killed thousands of people, as in the last war against Gaza in 2014. [Israel] have shown that you do NOT respect international law. We are coming back to punish you again.

We always say expect us but you always fail. We are unexpected; we’ll show on 7 April 2015 what the electronic holocaust mean…" - Anonymous Op Israel Video

Stay Secure and Anonymous: Save Over $750 on Lifetime Subscription of Tiger VPN Lite