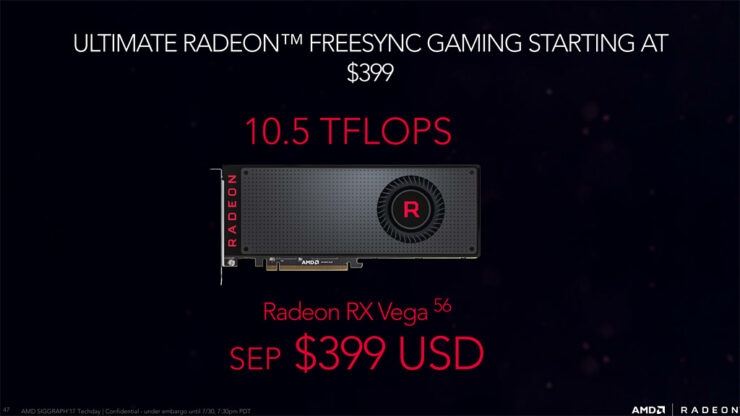 Tweak Town has apparently gotten their hands on performance numbers of the Radeon RX Vega 56 graphics card. Citing their own 'industry sources' they list a number of benchmarks as well as the RX Vega 56's score. Keep in mind however, that since we do not know who this industry source is that they are talking about, it is probably wise to take this with a grain of salt till confirmation from any of the usual sources. That said, I am fairly certain that TT was diligent in their vetting process and is definitely worth a story.

AMD's Vega 56 could very well be the value leader of this generation, higher performance than the 1070 - Tweak Town report

The benchmarks were run at 2560x1440 with the AMD Radeon RX Vega 56 easily beating NVIDIA's GeForce GTX 1070 in Battlefield 1, DOOM, Civilization 6, and even Call of Duty: Infinite Warfare. Tweak Town's source said that Battlefield 1 was run on Ultra settings, Civ 6 was on Ultra with 4x MSAA, DOOM was at Ultra with 8x TSAA enabled, and COD:IW was running on its High preset. The test rig had an Intel Core i7-7700K @ 4.2GHz coupled with 16GB of DDR4-3000MHz RAM.

The RX Vega 56, as the name suggests, has 56 CUs with a stream processor count of 3,584. The Radeon RX Vega 56 will also feature 8 GB of HBM2 VRAM which will deliver a rated bandwidth of 410 GB/s along a 2048-bit bus interface. It will  be using HBM2 just like its big brother and will retail for $$399. The chip will feature a total compute horsepower of 10.5 TFLOPs (FP32) and will feature a TDP of 210W which will be provided through an 8 and 6 pin power connector configuration.

The default clocks on the Vega 56 are at 1471 MHz for the boost, which is significantly lower than the Vega 64 Liquid Cooled edition at 1677 MHz. This implies that with proper aftermarket cooling on the reference edition (or the custom variants themselves) AMD has left quite a lot of room for overclocking support on the brand new Vega GPU. In any case, if this report is true, then we should see NVIDIA shedding price on the 1070 and probably the 1080 as well to make it more competitive with the Vega 56.