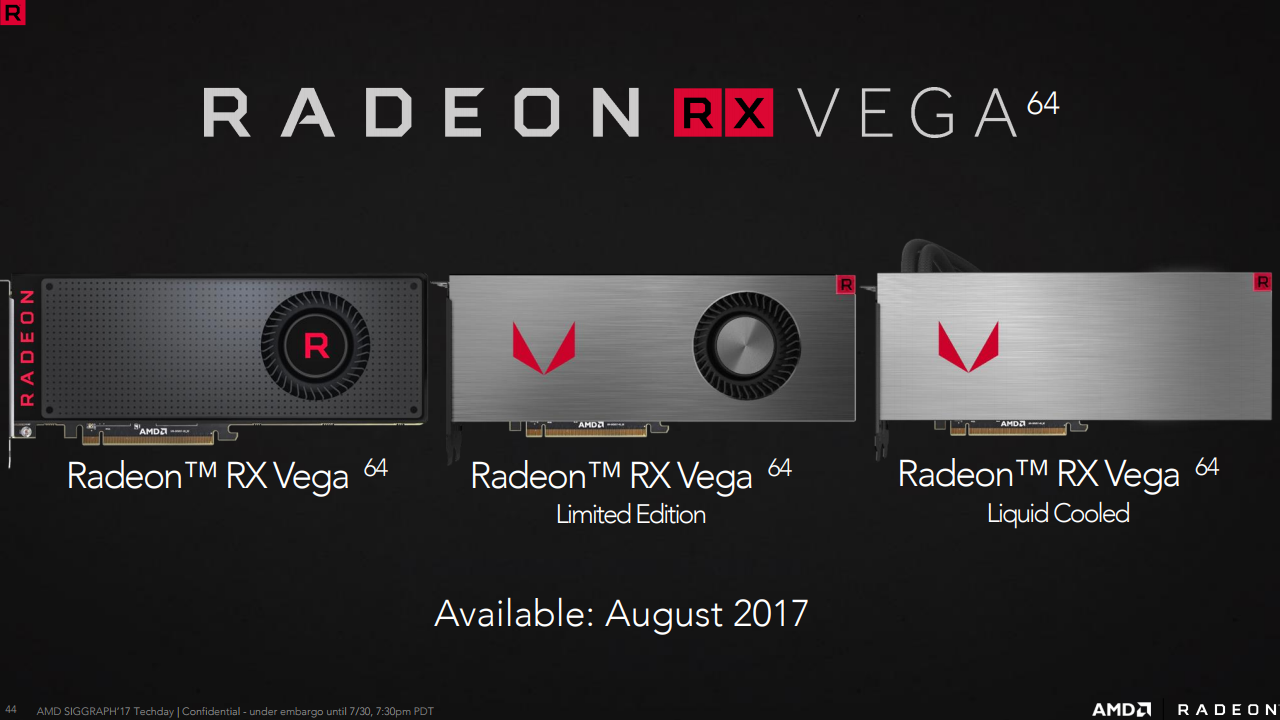 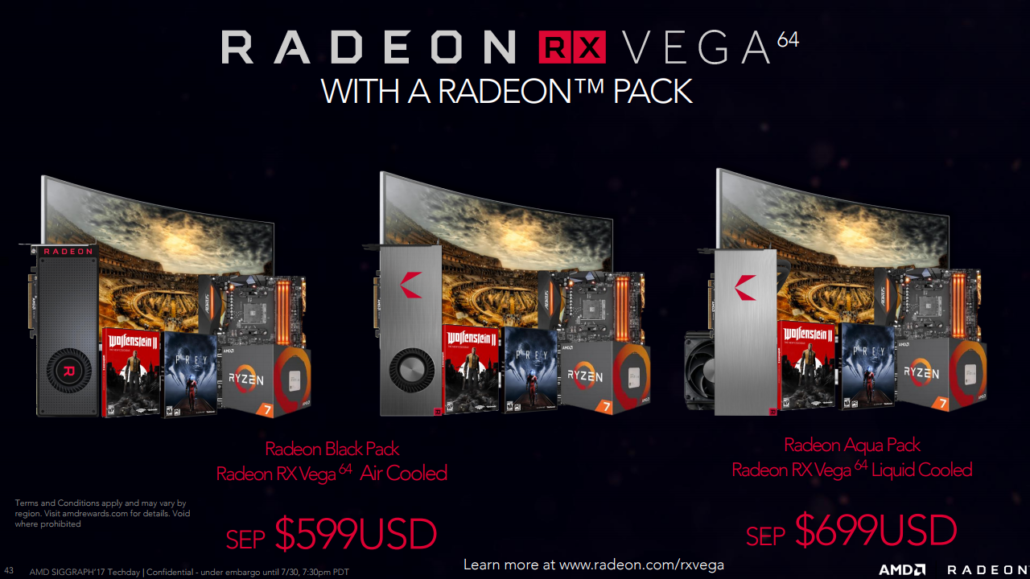 AMD has also announced the new Radeon Pack promotion with their Radeon RX Vega graphics cards. These include the following:

The AMD Radeon RX Vega 64 Liquid, Air and reference models will be shipping with these packs. The starting price of the Radeon Red pack is $499 US for the reference model which grants you two free games (Wolfenstein II and Prey 2). The higher priced Radeon Black Pack for $599 US grants you the game and a $100 US discount on a Ryzen 7 CPU while the top end Radeon Aqua pack will get you all of the above plus $200 off of an Samsung ultra-wide FreeSync monitor for just $699 US.

For a limited time in select regions, AMD and its industry partners are offering Radeon RX Vega purchasers an unprecedented assembly of gamer "must-haves" in new Radeon Packs, including deep discounts on select Ryzen multi-threaded CPUs and motherboards combos as well as select Samsung displays with Radeon FreeSync displays, and two extraordinary AAA game titles – all the ingredients necessary for the best possible PC gaming experience in one of the biggest industry collaborations ever seen. via AMD 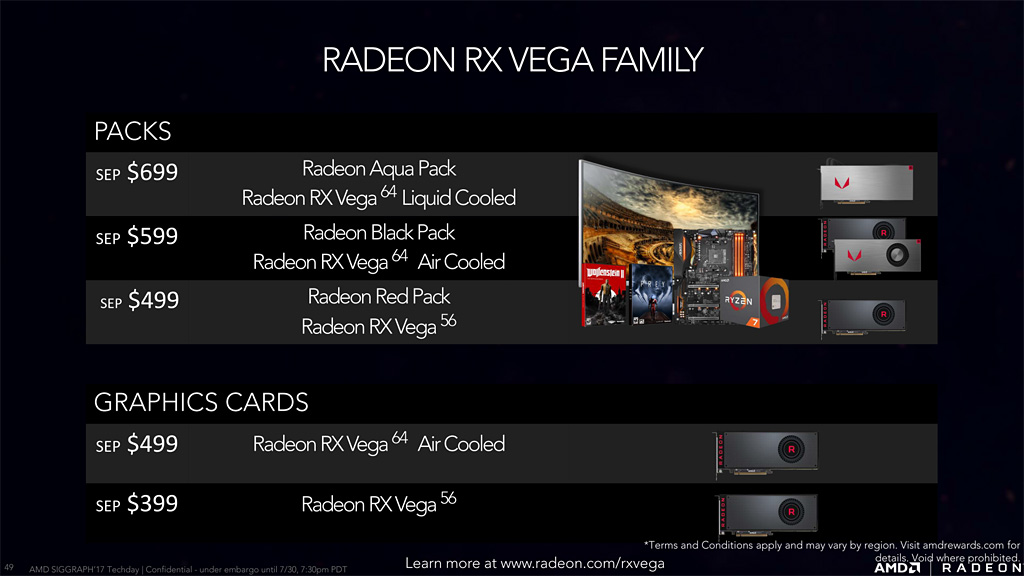 There’s also 8 GB of HBM2 VRAM which comes in two stacks (4 GB per stack). The graphics card has a total rated bandwidth of 484 GB/s which is lower than the 512 GB/s on Fiji. It also features a pixel fill rate of 90 GPixels/s. Additionally, the cards will feature 4 MB of L2 cache and 45 MB of SRAM across the GPU. AMD will be launching all three variants of the Radeon RX Vega 64 and also the Radeon RX Vega 56 graphics cards at Capsaicin Siggraph so make sure to stay tuned for more info. 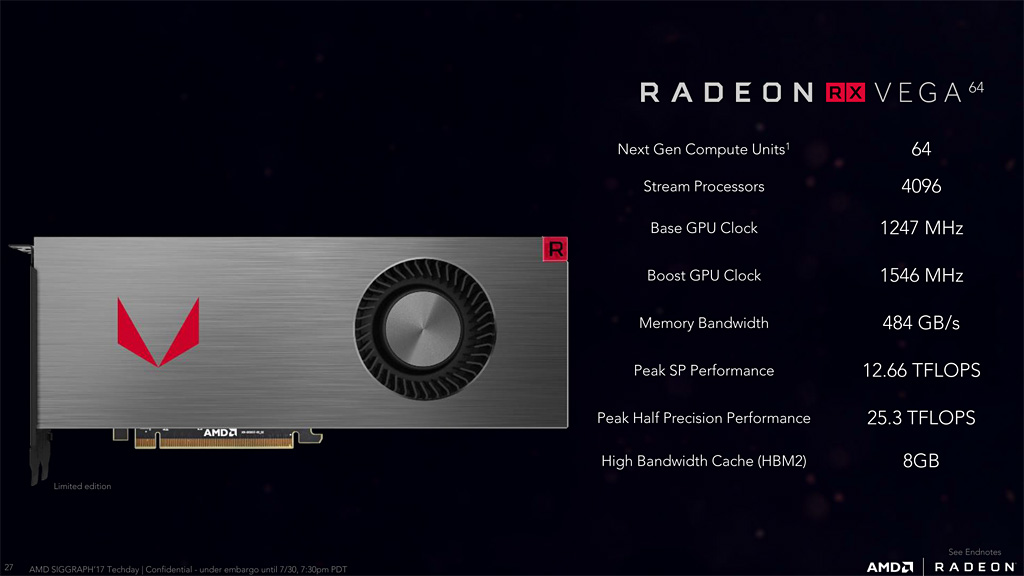 The Radeon RX Vega 64 Limited Edition is very similar to the Radeon RX Vega 64 reference edition in terms of PCB design and clock speeds. The only difference is the more elegant cooler design that makes use of premium material for the shroud which looks great.

There’s the Vega logo on the top and a Radeon “R” square in the corner which emits LED light, similar to the Radeon Vega Frontier Edition. This model will cost slightly more than the reference edition and since it’s a limited edition, it won’t be available for the entire lifespan of the Vega lineup.

Inside the card, we can see that the card uses a full length PCB and houses the Vega 10 GPU on its interposer along with the HBM2 VRAM. There are two stacks of HBM2 memory that are 4-Hi each and incorporate up to 8 GB of HBM2 VRAM. The card has power phases running around the GPU. The card uses a plastic base plate to provide extra support to the PCB and heat dissipation. There is a single blower fan that pushes air towards a large isothermic vapor chamber and out of the assembly and through the exhaust vents on the I/O which also feature a HDMI and triple DisplayPort connectors. 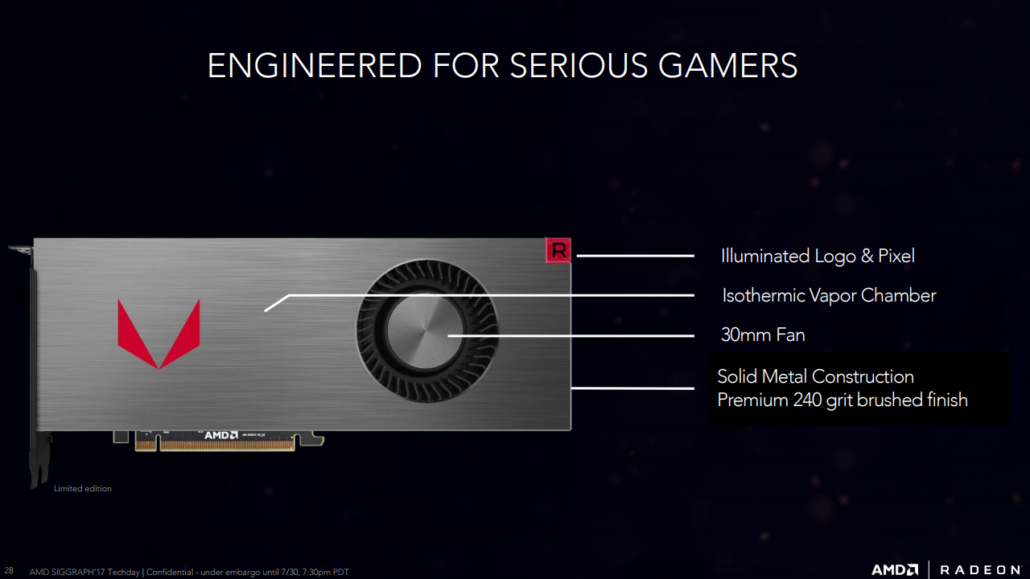 In terms of clock speeds, both reference and limited edition (air cooled) models will be shipping with out-of-box frequencies of 1247 MHz (base clock) and 1546 MHz (boost clock). The TDPs has been configured at 295W for the air cooled models and power will be provided through dual 8 pin connectors. 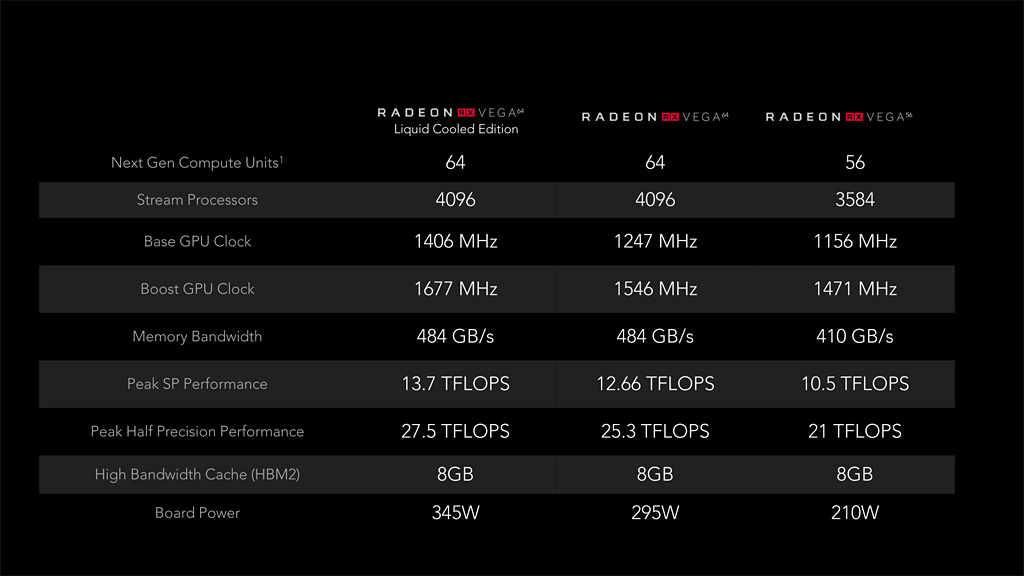 Both cards look premium and nicely designed with the whole brushed silver texturing. The Radeon RX Vega 64 graphics cards are powered by dual 8 pin power connectors and will require beefy power supply units to keep them fed under heavy gaming loads. The TDP for the Liquid cooled models will be configured at 350W.

AMD is using the flagship Radeon RX Vega 64 Liquid cooled models in most of the benchmarks and this variant has the highest clock speeds of all. In performance tests, AMD used a reference GTX 1080 against their RX Vega 64 Liquid edition and most of the results were on par with the GeForce solution. The difference here is that AMD is calling RX Vega 64 as the smoother option for the same price.

In test results, the AMD Radeon RX Vega 64 achieved 53 FPS (Min) and 76 FPS (Max) in a range of games at 4K. The GeForce GTX 1080 scored a higher Max frame rate of 78 FPS but was slower in terms of minimum frame rate with 45 FPS. AMD used their flagship liquid cooled model that costs $599 US against the GTX 1080 which costs $499 US. I personally believe that AIB custom models of the GTX 1080 will be able to outpace the RX Vega 64 Liquid in such tests.

AMD will also be shipping the Radeon RX Vega 56 which is based on the cut down Vega 10 die. The card will be available in reference only variants at launch and feature the same blower styled cooler as the Radeon RX Vega 64 reference model. The graphics card will feature 3584 cores that will be clocked at 1156 MHz base and 1471 MHz boost. The chip will feature a total compute horse power of 10.5 TFLOPs (FP32) and will feature a TDP of 210W which will be provided through an 8 and 6 pin power connector configuration.

The Radeon RX Vega 56 will also feature 8 GB of HBM2 VRAM which will deliver a rated bandwidth of 410 GB/s along a 2048-bit bus interface. In terms of pricing, the model will hit retail for $399 US however pricing has not been confirmed yet.

AMD has also teased their latest Nano, the Radeon RX Vega Nano at Capsaicin Siggraph. The event is supposed to go live in a bit so we will definitely hear more details soon. As for the card, it will feature the same Vega 10 GPU although we aren't sure if it will be based on the Vega 64 or Vega 56 SKU. The card however is as small and similar in design as the previous Radeon R9 Nano graphics card which was a hit among the SFF community.