Rumor has it that Apple may contract AMD to design a semi-custom x86 SOC for its iMac products in 2017 and 2018. According to a report from Bitsandchips.it this deal would allow Apple to secure a high performance x86 SOC design at a significantly lower cost than competing Intel solutions. 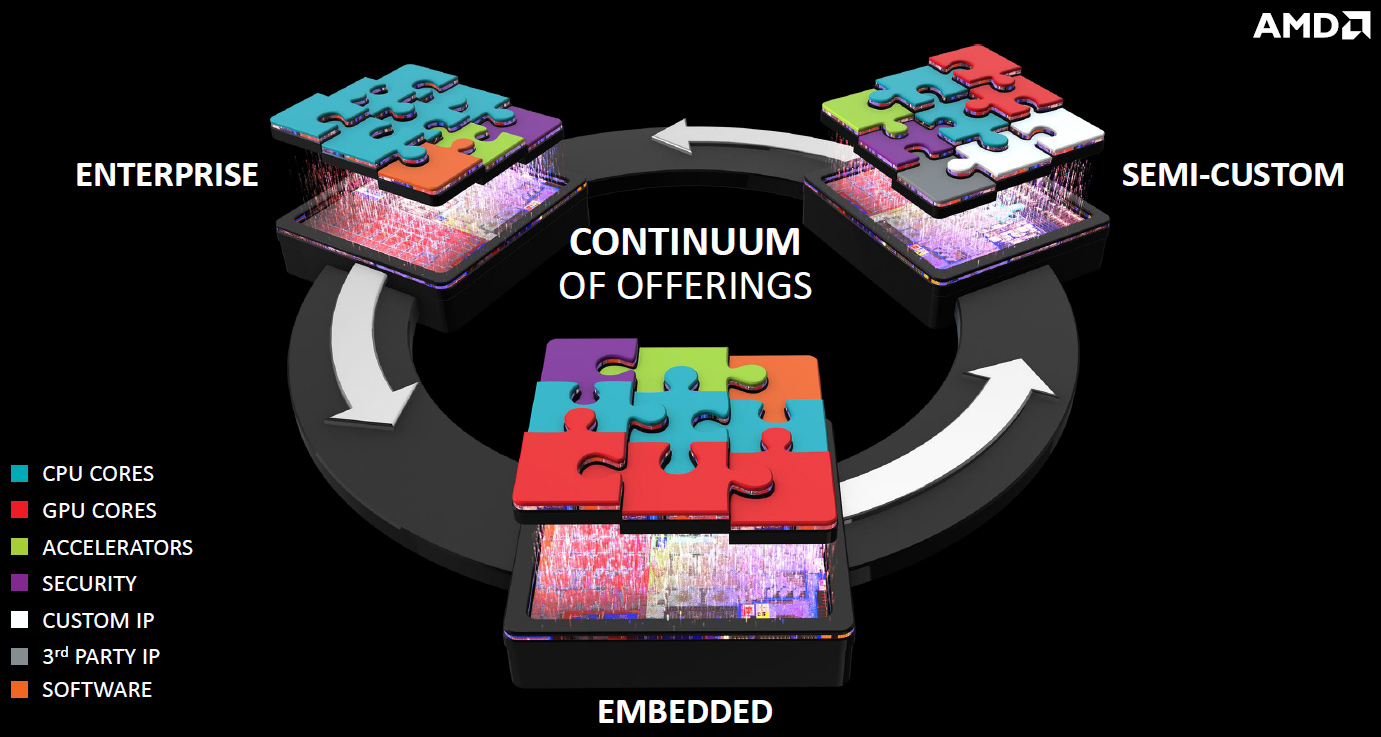 At the 2017-2018 timeframe AMD will have two high performance CPU cores, an ARM based design code named K12 and a second generation Zen "Zen+" x86 design. However the report explains that as the x86 ISA is a necessity in the high-end desktop and prosumer level Apple products a Zen based design is most likely.

A Semi-custom SOC Is A Win For Both Apple & AMD

In addition to driving cost significantly down for Apple, another high-profile design win for AMD would serve as viability booster for the company's semi-custom business following its success in the consoles. Both companies have entered a long-standing partnership, with AMD providing the graphics chips for the current iMac and Mac Pro designs.

A Semi-custom SOC x86 for the iMac would have to include a high performance x86 component, namely Zen, in addition to a graphics engine to drive the visual experience of the device. Such a design would be very similar to the current semi-custom Playstation 4 and XBOX ONE Accelerated Processing Units, combining x86 CPU cores with a highly capable integrated graphics solution.

In 2014 AMD's President and CEO Lisa Su announced that the company had secured two new semi-custom design wins, one that was x86 based and the other was ARM based. AMD's CFO Devinder Kumar later revealed that one of these two designs will take AMD's semi-custom business to markets beyond gaming. Basically confirming that one of the two designs was for a gaming device.
In the Q2 2015 earnings teleconference, Lisa Su announced a third semi-custom design in the pipeline. And in the most recent Q3 2015 earnings teleconference AMD's CEO announced that one of these three new designs  will begin generating revenue in the second half of 2016.

Ian Ing - MKM Partners - Analyst
Great, thanks. And then follow-up, enterprise, embedded, semi-custom, I am just trying to see how it can grow -- possibly grow next year. You have game consoles obviously, regular ASP declines year over year. What should we think of the main drivers of new revenue that could perhaps get you over this year's type of revenue run rate? Is it the other semi-custom wins or is it some other areas?

Lisa Su - Advanced Micro Devices, Inc. - President, CEO
Yes, so the way I would think about the enterprise, embedded, and semi-custom segment in terms of longer-term revenue growth, in 2016, as we said, we will have additional semi-custom revenue ramping in the second half of 2016, so I think that would be one driver.

Interestingly, all whispers point towards that semi-custom design as being Nintendo's next generation gaming device dubbed "Nintendo NX" which coincidentally is pegged for a 2016 holiday launch, right around when AMD expects to start generating revenue from the upcoming semi-custom ramp mentioned above.

If Nintendo's chosen semi-custom design is x86 based then any game that's been released on either the PS4 or the XBOX ONE can be ported over to the new device with relative ease. Allowing Nintendo to jump in on the competition rather than form a niche of its own as it did with the Wii U. With a device that's rumored to have "industry leading chips" which are "incredibly powerful" not only can Nintendo come out with a device that's compatible with all the current and upcoming gaming titles, it can do so with hardware that's potentially better than that of the competition. Something which Nintendo has struggled to achieve over several previous console generations but has the perfect opportunity to accomplish now.

And this is a fairly good example of why a semi-custom design makes sense for Apple. It allows the company to differentiate its products more effectively from the competition by tailoring the SOC for its devices. It also allows the company to reduce costs, which would expand its profit margins. Both of which are very attractive propositions. And that's what often drives AMD's semi-custom clients to opt for a unique design rather than an off-the-shelf product.