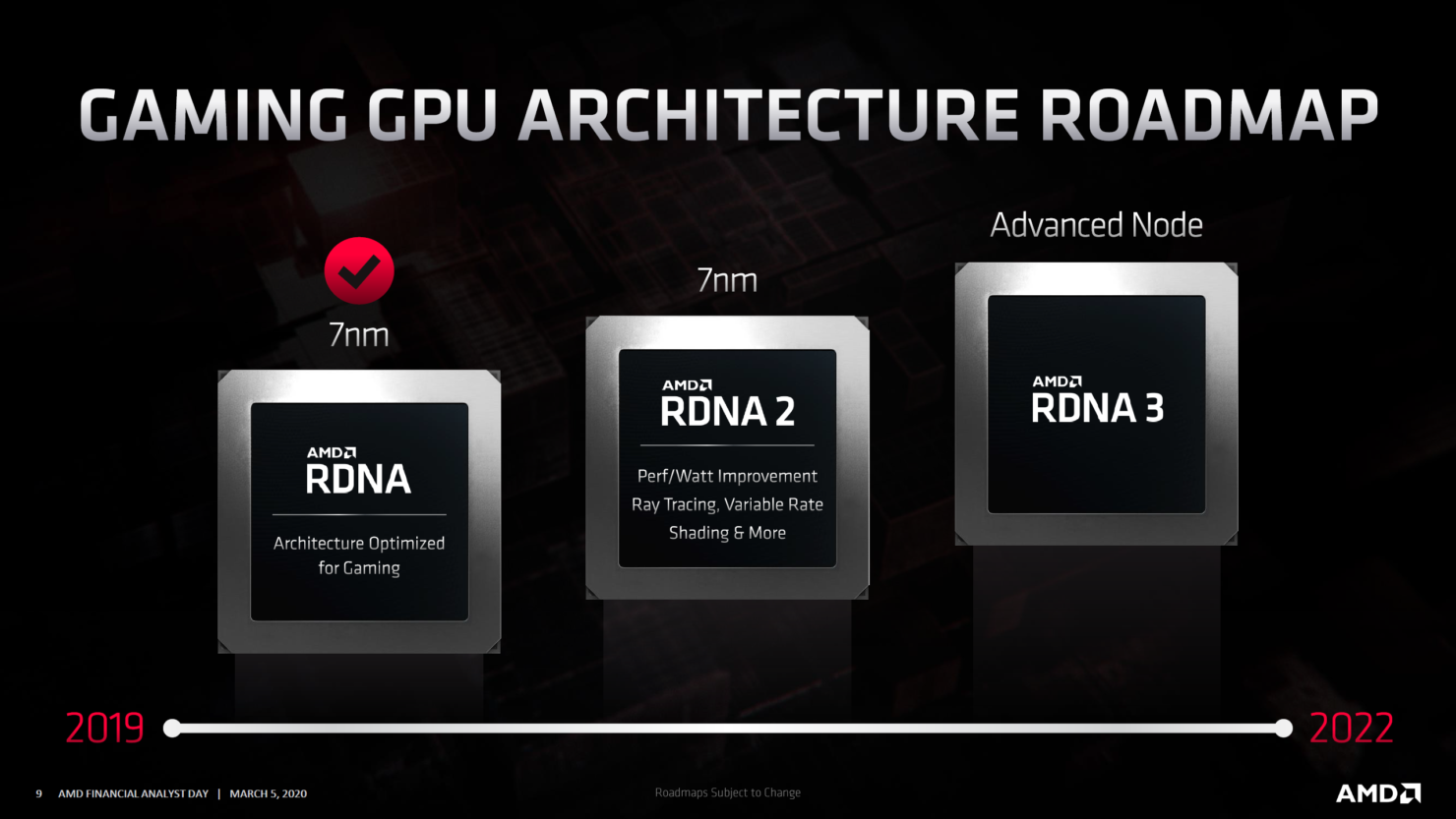 AMD has just announced that its next-generation RDNA2 based Radeon RX GPU family will feature 50% better performance per watt than existing RDNA based gaming graphics cards. The new GPUs would also feature additional features which would deliver better gaming experience while being based on the latest 7nm process node.

AMD unveiled that its RDNA2 GPUs will deliver a similar performance jump over the first-gen RDNA GPUs like Zen 2 delivered over Zen 1. The first RDNA GPUs delivered a massive 50% increase in performance per watt over GCN architecture and RDNA2 GPUs are expected to do the same over RDNA1, delivering another 50% increase in performance per watt. This increase isn't specific to just desktop parts but would also be seen in the notebook segment as mobility chips based on the 2nd Gen RDNA architecture would also be landing in gaming notebooks at the start of 2021. 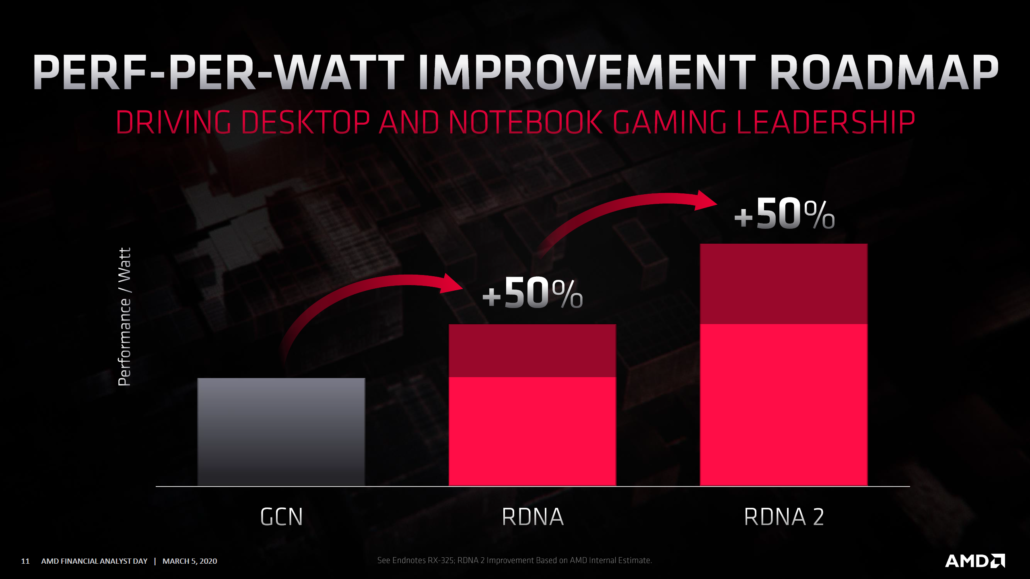 According to the roadmap shared by AMD, the RDNA2 GPUs would feature three key features that will be part of the new GPU architecture. First and foremost is the performance per watt increase which is due to a number of reasons. AMD will be shifting from TSMC's 7nm process to the more advanced 7nm process node. The new process node itself increases transistor efficiency on the new GPUs while decreasing its overall size, allowing AMD to cram more performance in a much smaller package. 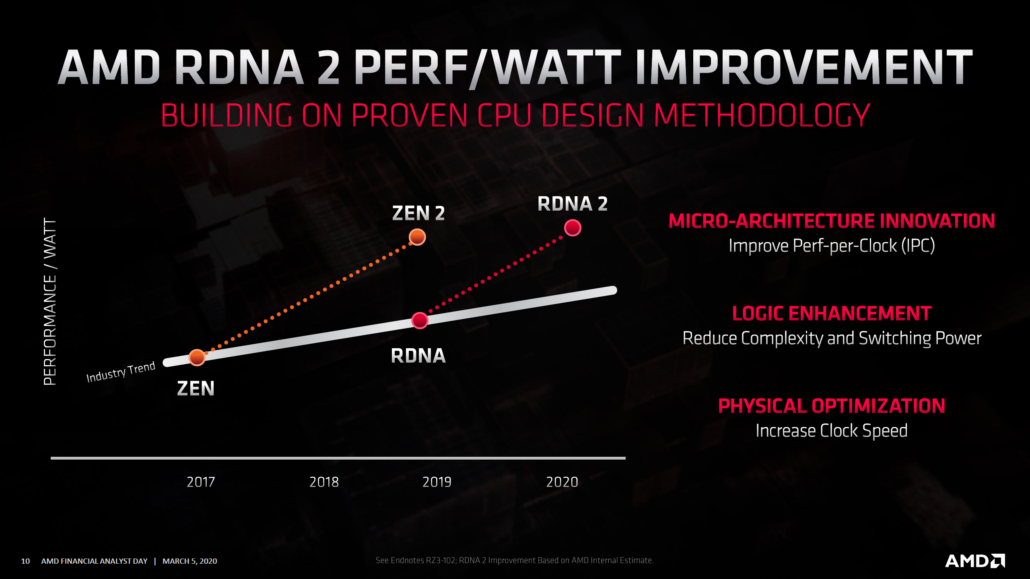 AMD has also announced that RDNA2 GPUs would feature VRS (Variable Rate Shading) & hardware-accelerated ray tracing. AMD is following suit with NVIDIA here who have already implemented the said technologies on its Turing GPU based GeForce RTX graphics cards. With the launch of the new consoles from Microsoft and Sony imminent, AMD is going to work to provide these features with its own optimization framework to developers for integration within next-generation gaming titles.

The SVP of AMD's Radeon Technologies Group, David Wang, mentioned that AMD's RDNA2 GPUs are already running Microsoft's DXR 1.1 demo internally which utilizes hardware-accelerated ray tracing. AMD's approach to ray tracing is to offer simplified development and speedy adopting and that is definitely possible through consoles where the mass majority of game developers focus their efforts towards.

David also acknowledges that AMD's solution will maximize performance with lower-level API which is something to look forward to because as of now, ray tracing on PC hardware is a very taxing feature and while it may look really good, the performance tradeoff is just too much for some to keep ray tracing always on.

AMD's CEO, Dr.Lisa Su, has already stated that we can expect a new RDNA2 GPU based Radeon RX high-end family and a 7nm RDNA refresh family to launch this year. The same was stated during the presentation in which it was stated that the "Navi 2x" lineup would scale from top to bottom and as the name suggests, would deliver twice the performance efficiency increase over the first-generation RX graphics cards.

One of the key features on the Big Navi Radeon RX GPU is that it is going to disrupt the 4K gaming segment, similar to how Ryzen disrupted the entire CPU segment. These are some bold claims by AMD but if those rumored specifications are anything to go by, then these claims may not be that far fetched.

The Radeon RX Navi 2x family of GPUs is expected to land later this year so it will be some time before we get to see these cards in action. AMD could give us another preview of the cards at a different event close to launching but for now, this is all the information we have from them.

As for the generation after RDNA2 which is cleverly called RDNA3, it is stated to be based upon a more advanced node so we are looking at either 5nm or something between 7nm and 5nm. The RDNA3 GPU family is regarded as 'Navi 3x' which highlights that it would deliver 3 times the GPU performance improvement over 1st generation RDNA GPUs.

In addition to the gaming stuff, AMD is also segmenting its GPU lineup into two categories. The RDNA GPUs will remain exclusive to the gaming market while a new segment, called CDNA or Compute DNA will be developed exclusively for the HPC/AI markets.

The main focus of CDNA would be performance, efficiency, features, scalability in the data center market. Currently, AMD's GCN architecture has served this segment but with CDNA, AMD will be creating GPUs specifically optimized for high-performance Compute, Machine Learning, and HPC.

The first generation CDNA GPUs would utilize the 2nd Generation Infinity Fabric while CDNA3 will extend to exascale and feature Infinity Fabric 3.0 while being based on a process node more advanced than 7nm. This sounds a lot like the new Radeon Instinct GPUs which are going to be featured in the El Capitan Supercomputer which you can learn more about over here.