AMD has revealed their 2014 Roadmap for APUs whilst adding Beema and Mullins to the APU Family. Both are targeted towards the same pie that Bay Trail eats from. Apart from impressive advances in actual GPU power the SDP of this generation of APUs will be as low as 2W! 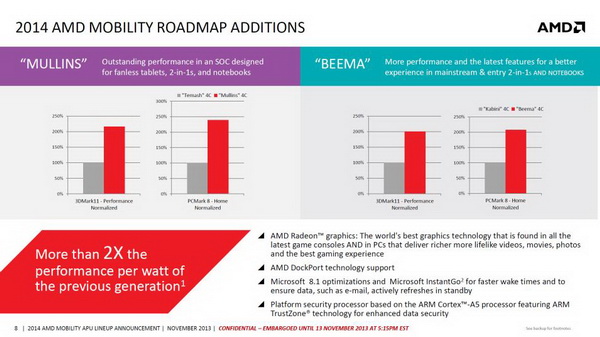 Performance Per Watt Doubled, Beema And Mullins Unleashed with SDP as Low As 2W - APU Roadmap 2014

AMD has revealed its complete APU Roadmap for 2014. The new Beema APU is the successor to Kabini and will scale from 2 - 4 Puma Cores, with GCN and SDP ranging from 10 - 25W. Mullins will be the ultra-low power APU mostly targeting fan less devices with SDP of only 2W. Mullins will succeed Temash and also feature 2-4 Puma Cores and GCN. It is also impressive that AMD was able to double the performance per watt offered by the last generation. This road map revealed at the APU '13 conference also featured an exact performance difference chart:

We can see that the actual processing difference ranges from 20% to 35% between the two generations. Of course Kaveri was in the spotlight at APU 13 but Beema and Mullins were definitely part of the main act. AMD also explained the AMD Security Processor design that both SOCs feature, concluding with:

"AMD is establishing excellent momentum this year in the low-power, mobile computing market and with 'Mullins' and 'Beema' coming in 2014 we are not standing still," said Mark Papermaster, AMD's chief technology officer and senior vice president, during his closing keynote at APU13. "AMD aims to deliver a set of platforms in the first half of next year that will outperform the competition in graphics and total compute performance in fanless tablets, 2-in-1s and ultrathin notebooks."

AMD is gearing up with APUs left and right. Though AMD is still on 28nm while Bay Trail is at 22 nm, Intel is already moving further down the fab process with its new Quark and AMD needs to put a rival there as well. With AMD APUs already in Next Gen consoles AMD needs to push the boundaries even further.