Entering the holiday season many companies have recently begun their seasonal promotions. . Yesterday we reported that Nvidia has slashed the price of the Titan Z down to $1500. Today we bring you news of another price cut. And it's by AMD this time around. 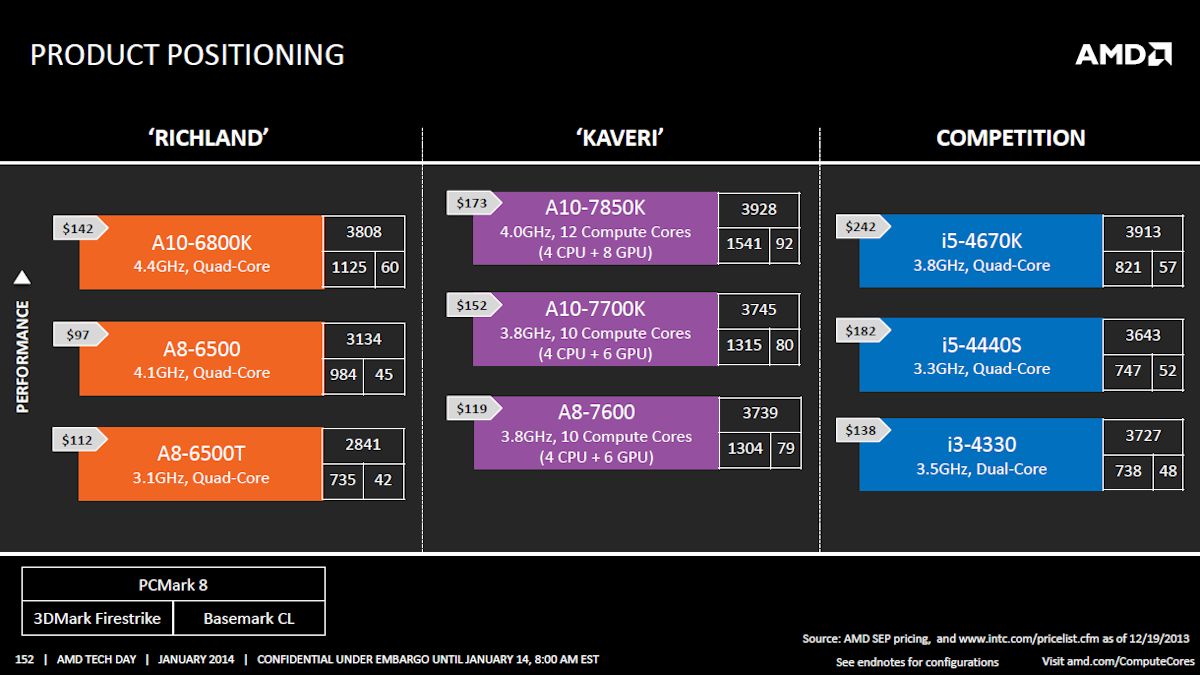 The products in question are AMD's APU family of processors. The price cuts include AMD's 7000 Kaveri series, 6000 Richland series and  5000 Trinity series of APUs.

The new prices are SEPs (Suggested E-tail Prices). So I wouldn't be surprised to see E-Tailers introduce their own price cuts or conversely price premiums. In addition to the models listed in the table above. AMD has also slashed pricing on the A4-6300 from $47.99 to $34. Pricing on the A4-5300 and A4-4400 has also been cut down to $31 and $27 respectively.

This adjustment in positioning should help AMD compete more directly with Intel's i3 hyper threaded dual core Haswell parts as well as Pentium and Celeron non hyperthreaded dual cores. The A8 7600 sits at an especially good sweet-spot position. You get a two module quad threaded CPU in addition to a 384 GCN core integrated GPU with adjustable TDP.

AMD's locked non-K parts can also be overclocked unlike their Intel counterparts. While the multiplier remains limited you can still overclock by bumping up the old-school Bus Speed. However if you intend to be more adventurous with your overclocks I'd suggest grabbing a K part for better results.

In addition the price cuts AMD is also beginning a new game bundle promotion. Through the end of October, purchasers of AMD A10 APUs may select from one of three game titles – Murdered, Thief, or Sniper Elite 3, using the AMD rewards key code inside the product box. Alternatively, the key code may be redeemed to purchase Corel Aftershot Pro 2 for only $5, as saving of between $55-$75 from the retail price. This promotion applies to the following AMD A10 APUs: A10-7850K , A10-7800 , A10-7700K , A10-6800K  and A10-6790K.