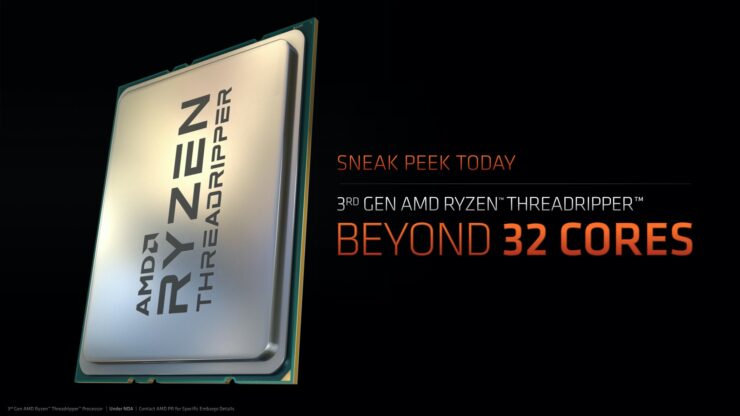 AMD seems to have not one but two 3rd Gen Ryzen Threadripper CPUs heading out next year if the latest reports are accurate. We already know about the 64 core Ryzen Threadripper 3990X that is going to demolish Intel's HEDT for many years to come but there seems to be a 48 core SKU too which has been spotted in the latest support list for CPU-Z, as reported by TechPowerUp.

Even if the processor was spotted, it might be an engineering sample and AMD may or may not launch it in the consumer space. Unlike the currently available Threadripper 3000 parts, the new SKUs launching next year would feature a total of 9 chiplets, eight of which would be Zen 2 dies along along with a single I/O die. To get 48 cores, AMD would have 6 cores out of 8 enabled across each Zen 2 die. Other than that, the chip would feature up to 280 MB of cache and a TDP of 280W which is similar to all 3rd Gen Threadripper released and announced so far.

With that said, we still don't know the clock speeds of the extreme core count SKUs but they would be higher than the EPYC Rome parts considering the enthusiast nature of Threadripper parts. The pricing would also be a key thing to consider as the Ryzen Threadripper 3970X already costs $1999 US. AMD could go the disruptive route and price the chip around $2499-$2999 US which should be enough to put the Xeon W-3175X to rest. That would also mean that the Ryzen Threadripper 3990X could go far beyond in terms of pricing that could end up near the $3499-$3999 US range.

You can definitely expect AMD to officially take the wraps off of their 64 core flagship chip at CES 2020 and we might also get an announcement for the 48 core part if it really does exist. There's a lot of new announcements coming in from all sides at CES so stay tuned for our coverage in the coming week.