The AMD Ryzen Notebook APU platform will be getting some major updates next year. For the top-end notebooks, AMD is preparing its 6nm Zen 3+ powered Rembrandt lineup which succeeds upon the Zen 3 powered Cezanne chips. Replacing The Lucienne APUs is the Barcelo lineup which will be getting Zen 3 cores and act as a Cezanne Refresh for the notebook platform. On low-power designs such as tablets and ultrabooks, AMD will be offering Dragon Crest as a successor to the Van Gogh processors. 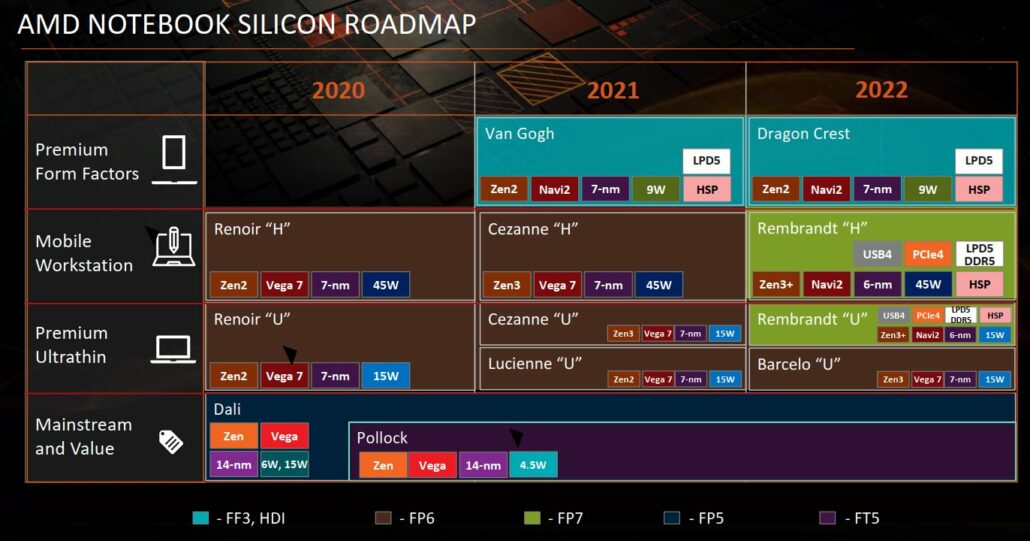 The AMD Rembrandt lineup of Ryzen notebook APUs are expected to be branded under the 6th Generation Ryzen family known as Ryzen 6000, replacing its Cezanne-based brethren. The two key technologies that will power Rembrandt will be a new Zen 3+ CPU & RDNA 2 GPU architecture. The Rembrandt APUs are said to be fabricated on the TSMC 6nm process node which is an optimized version of the N7 process. A

AMD will also be featuring its RDNA 2 based Navi 2 GPUs on Rembrandt Ryzen APUs. The Ryzen 6000 lineup of Rembrandt APUs is said to offer up to 12 Compute Units. This means we will be getting up to 768 stream processors, a 50% jump from Cezanne parts which feature 512 stream processors based on the older Vega graphics architecture. In addition to the architectural update, we can also expect RDNA 2 iGPUs to feature impressive clock frequencies as seen on the desktop graphics cards.

In addition to the core technologies, AMD will also feature its CVML (Compute Vision & Machine Learning" system onboard the Rembrandt chips for better AI capabilities that would directly target Intel's future-gen AI-enabled chips on the desktop and notebook segment. Other prominent features of the Rembrandt Ryzen APUs from AMD will include support for PCIe Gen 4 and LPDDR5/DDR5 memory support. The Rembrandt APUs will feature up to DDR5-5200 memory support, 20 PCIe Gen 4 lanes, and two USB 4 (40 Gbps) ports. As per the roadmap, the Rembrandt APUs will feature support on the FP7 platform.

Just like the Renoir refresh lineup which we know as Lucienne, AMD will be refreshing its Cezanne APUs for a 2nd round on the notebook platform. These APUs will be known as Barcelo and will be targeted at low-power / ultra-thin notebooks. We can expect similar specifications as the existing Renoir lineup which includes 8 cores and 16 threads for the CPU side and up to 7 Vega compute units for a total of 512 stream processors. Do note that we will definitely see a boost in CPU and GPU clock speeds but don't expect them to be that dramatic. The chips are suggested to fall in the 15W TDP category range.

The Barcelo APUs will remain compatible with the FP6 platform which means that it would be very inexpensive to design notebooks around the APUs as the designs had already been formulated a whole year in advance and manufacturers already had got lots of experience with the Cezanne line of chips.

Finally, we have a new lineup of custom SOCs that AMD is developing for ultra-low power platforms known as Van Gogh. The AMD Zen 2 powered chips will be based on the TSMC 7nm process node and will feature a monolithic design composed of the CPU, GPU, and I/O IPs. The chip itself will have a very small footprint in terms of die area and the lower cache will allow for cost-savings for AMD in mass-producing these chips.