It looks like Germany isn't the only market where AMD is doing well as reports from major Asian based retailers show the same trend for Ryzen processors which are now gaining more popularity than Intel's Core processors lineup.

According to Danawa Research, a firm run by Danawa which is one of the biggest retailers in South Korea, the volume of AMD Ryzen CPUs sold exceeded that of Intel Core processors just a few days after the new Ryzen 3000 chips became available on store shelves. Starting Monday (8th of July), as soon as the market opened, AMD CPU sales witnessed a huge jump of 48.72% versus 28.24% just a day earlier. This trend continued and the volume of AMD CPUs sold exceeded Intel's just two days later at 53.36% versus Intel's 46.64%. Not only that but the research firm also shared the statistical figures which show the number of clicks on their retail outlet for each processor brand. The same results were reported with more users now searching and looking into AMD's processor lineup. In comparison, the AMD CPU drew the attention of up to 76.95% users while only 23.05% users were interested in Intel's lineup.

The other breaking news comes from BCN Ranking, who round up data from major outlets in Japan, who report that the AMD Ryzen CPUs have managed to overtake Intel's share and now stand at 50.5% versus Intel's 49.5%. This is a continuing trend with Intel's market share showing a downward trend as it was 72.1% back in October 2018 and has now seen a major fall. 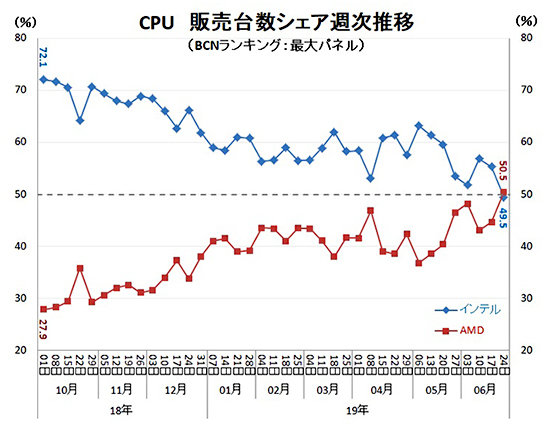 If that isn't enough, PassMark who rounds up data from thousands of performance test results in their database has updated their latest market share numbers for AMD and Intel CPUs. This Q1 (2019) market AMD's highest CPU share gain in 5 years and shows a massive jump for the red team which goes off to show that this trend isn't just region specific as many have thought. It's the disruptive nature of AMD's Ryzen processors which have led them to not only gain the trust of high-end enthusiasts but also mainstream users that they are indeed back in the game and Ryzen will continue getting better and offer more competition in the market with upcoming generations. 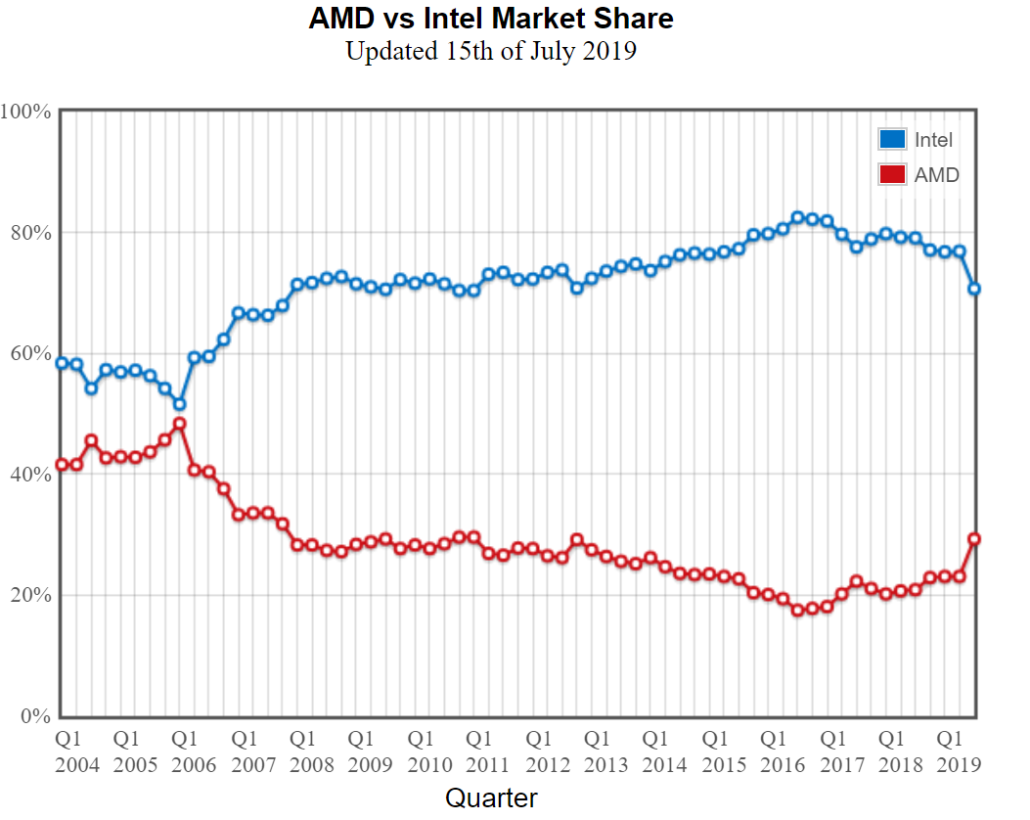 According to the PassMark market share report, Intel CPU share fell from 76.90% to 70.70% while AMD CPUs grew their share from 23.10% to 29.30% from Q1 2018 to Q1 2019. With AMD having a strong roadmap (post-2020) with future Zen cores and proper lineups for desktops, notebooks, servers and HEDT platforms against a weakened Intel who can't move away from 14nm on their mainstream families, it looks like AMD is just gonna keep on eating up blue team's share.