AMD's flagship Cezanne-H high-end mobility CPU, the Ryzen 9 5900HX, has been spotted within the Geekbench benchmark. A few days ago, the AMD Ryzen 7 5800H leaked out too by TUM_APISAK & now, the same leaker has spotted the fastest chip in the Cezanne-H family which is planned for an official unveiling at CES 2021.

The AMD Ryzen 9 5900HX is based on the Zen 3 core architecture and as such, it should be part of the Cezanne-H lineup which is the direct replacement to the Renoir-H Ryzen 4000H CPUs and more specifically, the Ryzen 9 4900HS which utilized the Zen 2 core architecture. The AMD Ryzen 9 5900HX would be directly competing against Intel's Tiger Lake-H family of high-end processors which are launching in the first half of 2021.

Coming to the specifications, the AMD Ryzen 9 5900HX features 8 cores and 16 threads. The chip was running at a base clock of 3.30 GHz and a boost clock of 4.60 GHz. The CPU features 16 MB of L3 cache and 4 MB of L2 cache. The L3 cache is a major upgrade over the Ryzen 4000U and Ryzen 4000H 'Zen 2' processors, offering increase inter-core latency speeds and bandwidth. The CPU will come with AMD's enhanced Vega graphics core based on the 7nm process node.

The CPU should be a 45W design configurable down to 35W. The cores were running at an average clock of around 4.5 GHz which is close to the maximum single-core boost clock. The chip was tested on an ASUS ROG Zephyrus GX551QS laptop which is an upcoming design. We might get to see this variant announced at CES 2021 too. There are reports circulating that the HX series will allow users to overclock them making these the first official AMD laptop CPU based on the Zen architecture to support the enthusiast feature.

The laptop features 48 GB of DDR4 memory clocked at 3200 MHz. There's no spec on the GPU but it is likely that Cezanne-H models will come equipped with NVIDIA's GeForce RTX 30 series mobility and AMD's own RDNA 2 based Navi mobility GPUs. 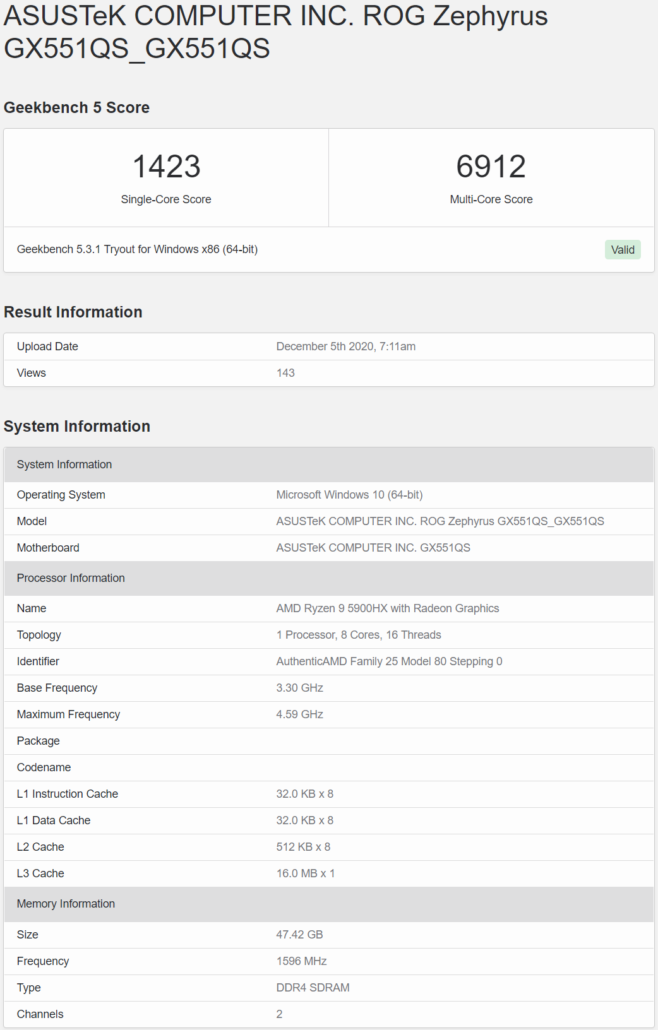 TUM_APISAK also spotted various listings of not only the AMD Ryzen 9 5900HX CPU but also the Ryzen 9 5900HS CPU. The HS series are higher binned CPUs which should feature the same clock speeds but at lower TDPs of 35W. Both models will be featured in three brand new ASUS ROG Zephyrus models which include DUO, G15, and G14 variants. The models were spotted equipped with NVIDIA's GeForce RTX 3080 (16 GB), RTX 3070 (8 GB), and RTX 3060 (6 GB) Max-Q series GPUs.

There's no word on pricing but expect them to come at a hefty premium over standard laptops and be unveiled by ASUS at CES 2021.