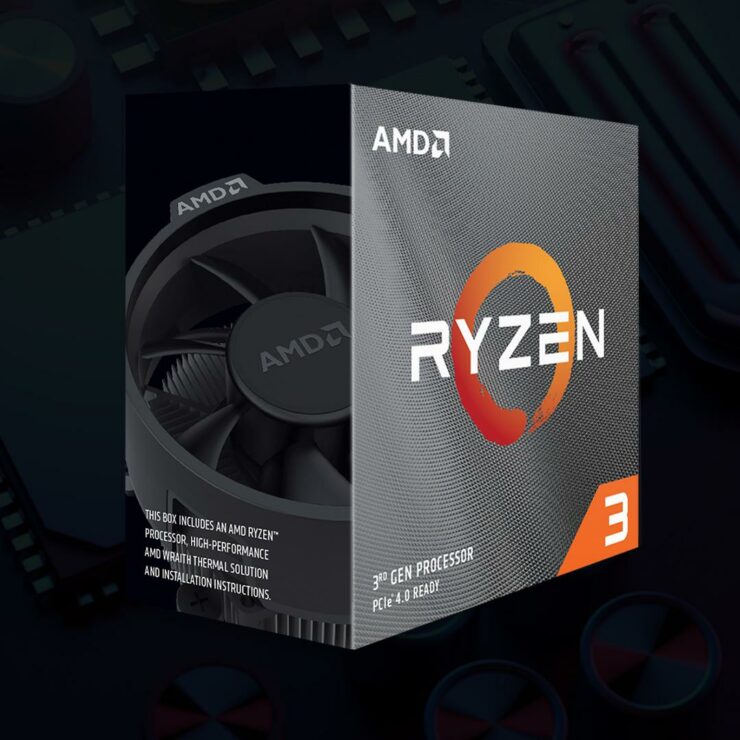 The AMD Ryzen 3 3300X and Ryzen 3 3100 CPUs will be hitting retail shelves this month, aiming for the sub-$150 US budget PC Gaming market. These two quad-core chips packing AMD's 7nm Zen 2 cores will definitely offer a huge performance boost over existing quad-core parts and recent leaks suggest that they might be pretty decent overclockers too.

AMD Ryzen 3 3300X & Ryzen 3 3100 Quad Core CPUs Could Potentially Be Great Budget Overclockers, Leaks Point to Up To 4.6 GHz OC on All Cores

Last week, we got to see a few leaked benchmarks of the two processors showcasing some really good performance numbers compared to Intel's 10th Generation Core i3 lineup (also leaked out). The primary advantage that AMD's Ryzen 3000 Quad Core would hold over the competing Intel i3 parts would be their Zen 2 core architecture which is based on a 7nm process node. The processor architecture offers better performance per watt and increased multi-threaded performance. Intel, on the other hand, will still be using a 14nm process node, albeit an advanced version of it to pump out higher clock speeds.

But when it comes to design, all AMD Ryzen 3rd Gen CPUs come with an unlocked design. Intel on the other hand only offers overclocking support on the 'K' series chips. Intel has not announced an unlocked Core i3 yet. So the two Core i3 models which are priced close to the 3rd Gen AMD Ryzen 3 CPUs are the Intel Core i3-10100, retailing at $122 US, and the Core i3-10300, retailing at $143 US. In comparison, the Ryzen 3 3100 would retail at $99 US and the Ryzen 3 3300X would retail at $119 US. Both AMD and Intel CPUs feature simultaneous multi-threading so it's all about the architecture and the clock speeds that these chips can churn up.

All of this staying at a low TDP of 65W should make it appealing for smaller builds and requiring a very modest cooling solution. Expect the Ryzen 3 3300X to be available beginning May 21st, 2020.

The Ryzen 3 3100 tones things down just a hair but manages to retain the 4 core and 8 thread Zen 2 based design. Cache and TDP remain the same with a total of 18 MB and a 65W TDP. The biggest change here is the reduction of the base clock to 3.6 GHz and the boost clock to up to 3.9GHz. The Core i3-10100 which will be its primary competitor will offer a base clock of 3.6 GHz, a single-core boost clock of 4.3 GHz, and an all-core boost clock of 4.1 GHz.

Judging from those specifications, the Intel Core i3 chips seem to offer higher clock frequencies but that's the max limit to where they will go since there's no overclocking support. Just having Ryzen 3 with overclocking support could be AMD's biggest ace in its sleeve as leaks point out to some hefty overclocking figures across various 3rd Gen Ryzen 3 chips tested.

The leaked overclocking figures come straight from Rogame who has posted not one but four different entries of the CPUs, all reporting very impressive results. In the entries, AMD's Ryzen 3 3300X was spotted with an all-core overclock of up to 4.4 GHz across all cores. The CPU scored 5472 points in the 3DMark TimeSpy benchmark which puts it slightly ahead of the Core i7-7700K.

But wait till you see what the little Ryzen 3 3100 is able to achieve. This chip was spotted with 3 different overclocks, one with 4.4 GHz, one with 4.5 GHz, and one with an impressive 4.6 GHz on all cores. AMD's Ryzen 3 3100 with an overclock of 4.5 GHz was able to outperform the Ryzen 3 3300X with a score of 5481 points in Time Spy benchmark which shows why this chip could knock out the Core i3 lineup right on launch.

Obviously, we have to have wait for final overclocking numbers and reviews when the CPUs launch in May but if you're planning to build a budget PC and thinking of what to get for your next CPU, then AMD has some really good options in the market with its 3rd Gen Ryzen 3 Quad Core parts and even the recently refreshed 1st Gen 'AF' series CPUs which hold tremendous value versus the Intel Core i3 lineup.