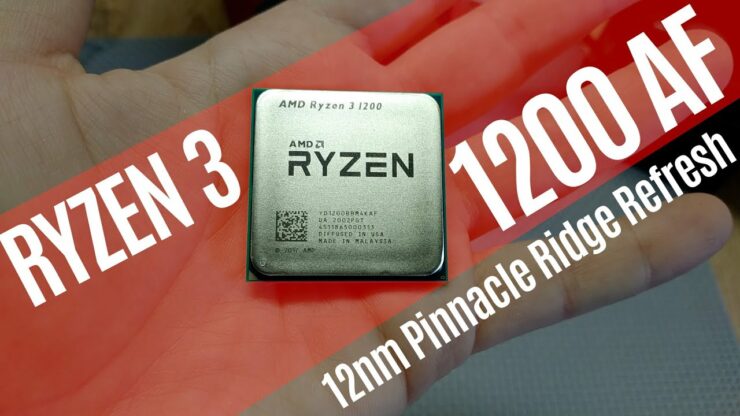 AMD's Ryzen 3 1200 CPU recently received a new revision which has been updated to the Zen+ 12nm core architecture known as the Ryzen 3 1200 AF. As initially reported in a previous article, this updated architecture doesn't offer faster clock speeds but instead allows for more stable clocks & a much higher overclock to be applied to this processor and also provides better memory overclock.

The AMD Ryzen 3 1200 AF processor features an upgrade to the12 nm Zen+ architecture. The primary feature of this processor is the higher overclock when compared to the original Ryzen 3 1200. Another feature is the better memory controller which allows for faster memory overclocks.

As shown in GameER's Youtube video, this updated processor can be clocked up to 4.0 GHz that is facilitated by the vastly improved architecture. In GameER's Video, it showcases how that even without the 4.0 GHz overclock he was able to achieve faster performance than the original Ryzen 3 1200 CPU on the AF model as it still outperformed the Intel Core i5-7400 in most tests.

The gaming performance on the chip was also superb for a budget quad-core chip. Surely, those making an extremely budget-ended PC would definitely want to go with the Ryzen 3 1200 AF CPU but the new $99 US Ryzen 3 3100 is also a very great option, further expanding with a new core architecture and offering even better-overclocking results.

The performance of the Ryzen 3 1200 AF would be fantastic in a budget PC build, with the lower power consumption alongside the better overclocking ability. It comes with a boxed cooled too that makes it a perfect partner for a budget gaming setup if paired with an A320 or even a B450 board.