The second installation in Bethesda's revival of the beloved Wolfenstein franchise was released earlier this month to great acclaim from gamers and critics alike, including here at Wccftech. If you're interested in learning more about the game and our take on it, make sure to check out our review of it here.

The technical side of Wolfenstein 2 is as equally impressive as its content. The game is built on Bethesda's venerable id Tech 6 engine, the groundwork for which was laid out by no other than the legendary John Carmack.

Wolfenstein 2 is the first product since the announcement of a long-term strategic partnership between Bethesda -- publishers of Fallout 4, Dishonored 2, DOOM, Wolfenstein 2 among others -- and AMD earlier this year, promising to deliver "unprecedented performance for our fans" and it shows. 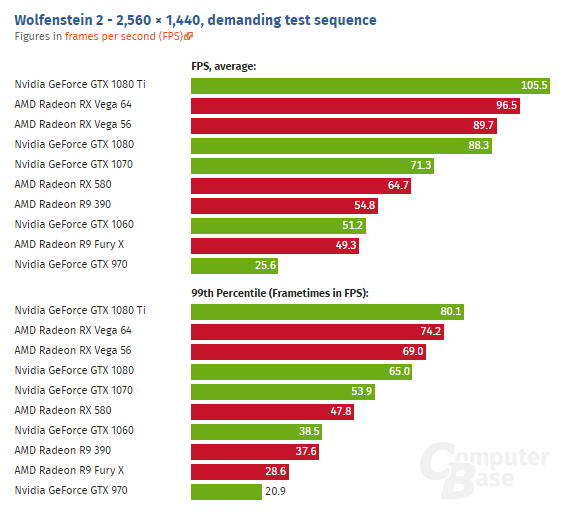 Wolfenstein 2 performance at release, via Computerbase.de

AMD Radeon graphics cards, and especially the Vega series, demonstrated exceptionally good performance in Wolfenstein 2 upon the game's release. Performance that has seen no less than a 22% uplift with the game's latest patch, computerbase.de reports.

Wolfenstein 2 performance with Patch #1 & #2, via Computerbase.de

This is thanks to a lot of hard work by the developer to optimize the game's performance in all aspects with special emphasis on Vega's new hardware features. And while Vega earned the lion's share of the performance uplift, the new patch also delivered marginal performance improvements across the board spanning NVIDIA and other AMD hardware. Pascal for example, saw a 3% improvement and Polaris ( RX 500 & 400 series ) saw a 10% improvement.

It will be very interesting to see what this long-term strategic partnership produces in the future. Especially with Bethesda Games Studios' head Todd Howard -- the man behind The Elder Scrolls & Fallout series -- teasing two new major projects that will rival "Skyrim & Fallout 4" at least one of which is expected to land next year. If the results from Wolfenstein 2 are any indication, then AMD Radeon users are in for one hell of a ride.