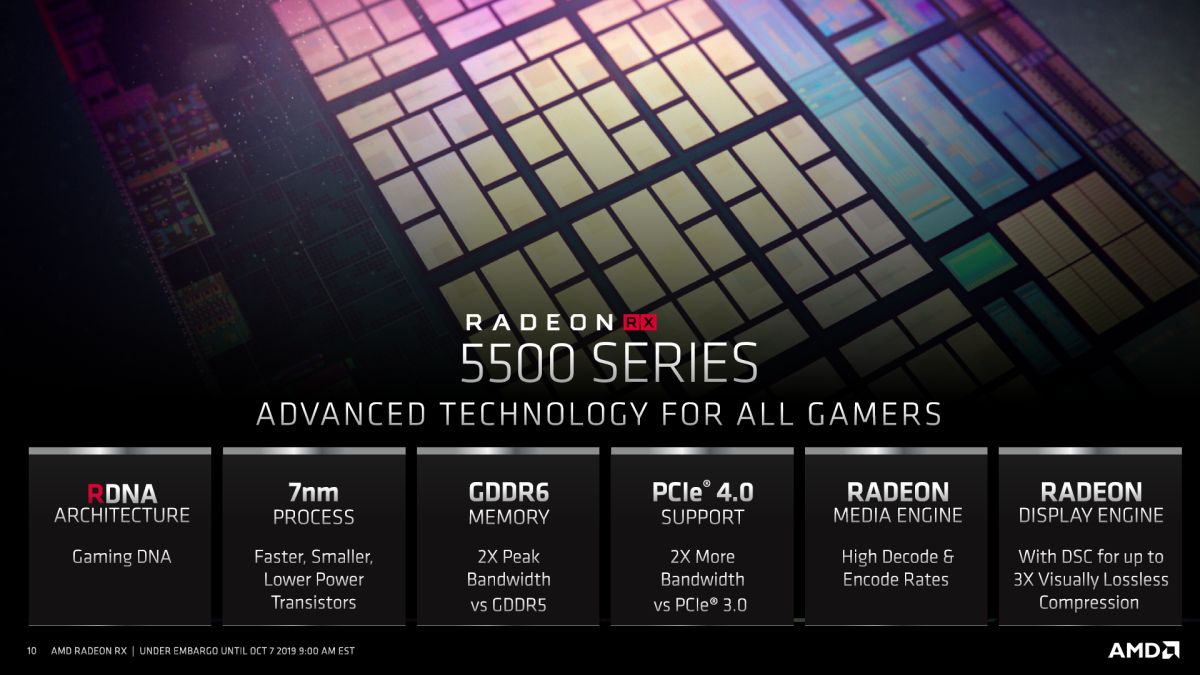 AMD will be announcing its brand new mainstream Radeon RX 5500 series today which are based on the 7nm Navi GPU architecture and aim both desktop and mobility platforms. Their details have been officially revealed by AMD which includes official specifications and performance metrics.

With the newest additions to the Radeon family, AMD is bringing its advanced RDNA gaming architecture and industry-leading 7nm process technology to legions of mainstream gamers worldwide in exciting new form factors and systems. Powered by RDNA, the Radeon RX 5500 provides up to 1.6X higher gaming performance-per-watt than current Radeon graphics cards based on the GraphicsCore Next (GCN) architecture. 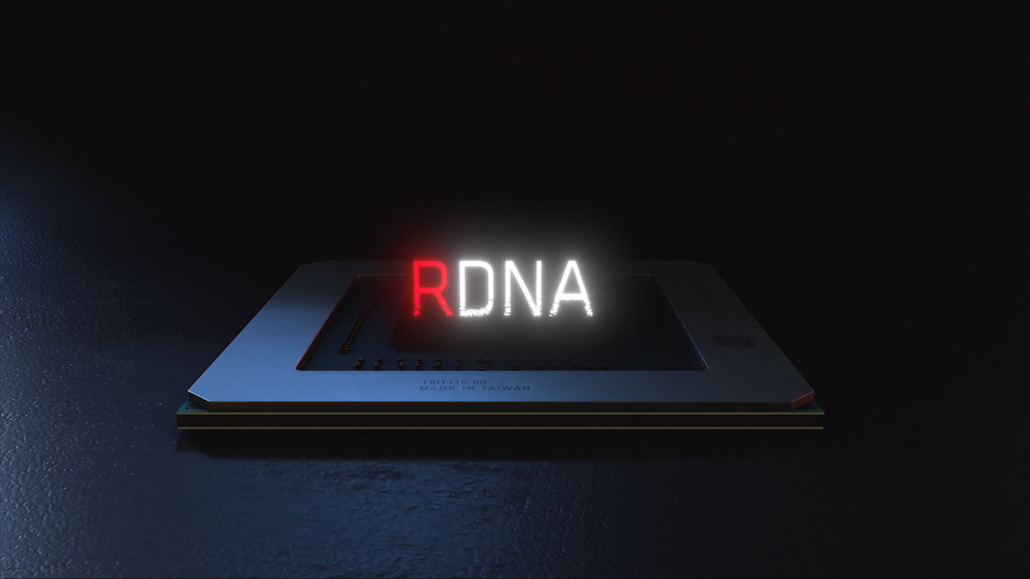 All three Radeon RX 5500 series SKUs are based on the 7nm Navi 14 GPU which has a die size of 158mm2 and has a total of 6.4 Billion transistors which are more than what AMD had on their 14nm Polaris 10 GPU (5.7 Billion transistors). Given the die size and transistor density, AMD states that the new GPUs would offer a 1.6x performance efficiency compared to the Radeon RX 480 which is based on the Polaris 10 GPU. With the GPU out of the way, let's get into the specifications for all three Radeon RX 5500 series products. 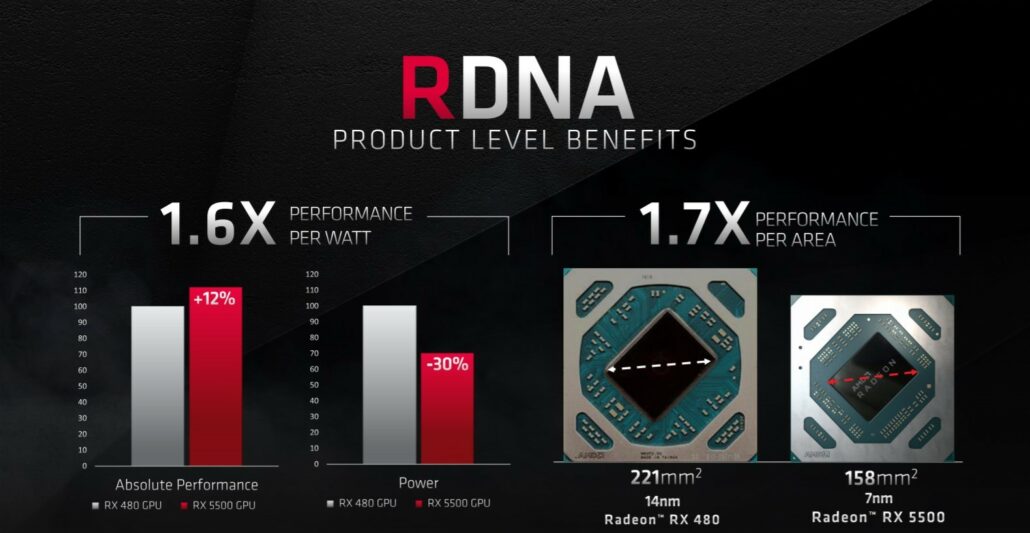 The AMD Radeon RX 5500 XT seems to be the flagship variant of the lineup featuring 1408 stream processors. This means that there are 22 compute units featured on the card. This is lower than the 24 CU variant we have seen in previous leaks which means that a fully enabled variant might pop in later or yields might have restricted AMD from offering a full 1536 SP graphics card. That is a speculative territory for now so let's just focus on the rest of the specifications.

The card features a boost clock of 1845 MHz whereas the Game clock is set at 1717 MHz. The card would feature up to 8 GB GDDR6 VRAM which means that 4 GB GDDR6 variants would also exist. The memory would clock in at 14 Gbps along with a 128-bit bus interface that would provide a total bandwidth of 224 GB/s.

The AMD Radeon RX 5500 would also feature the same core config as the Radeon RX 5500 XT with the only change being the 4 GB GDDR6 memory buffer. Even the clocks are the same on the non-XT variant so I doubt if the performance would be any different too. It will be interesting how much lower in price the Radeon RX 5500 would go for as it would offer far more perf/dollar compared to the XT variant if these specs are indeed correct. The same goes for the mobile variant which comes with the same core configuration but lower clock speeds of 1645 MHz boost and 1448 MHz game clock. Both cards feature a 110W TDP / 150W TBP (Total Board Power) and AMD has recommended a single 8-pin power connector for them to boot.

When it comes to performance benchmarks, the 4 GB Radeon RX 5500 would offer better performance than the 8 GB Radeon RX 480. The card is also being compared to the NVIDIA GeForce GTX 1650 4 GB which retails for around $150 US. Given the metrics we are looking at, the card may also land in the $150 US market range and offer superb performance which rivals the Radeon RX 590. 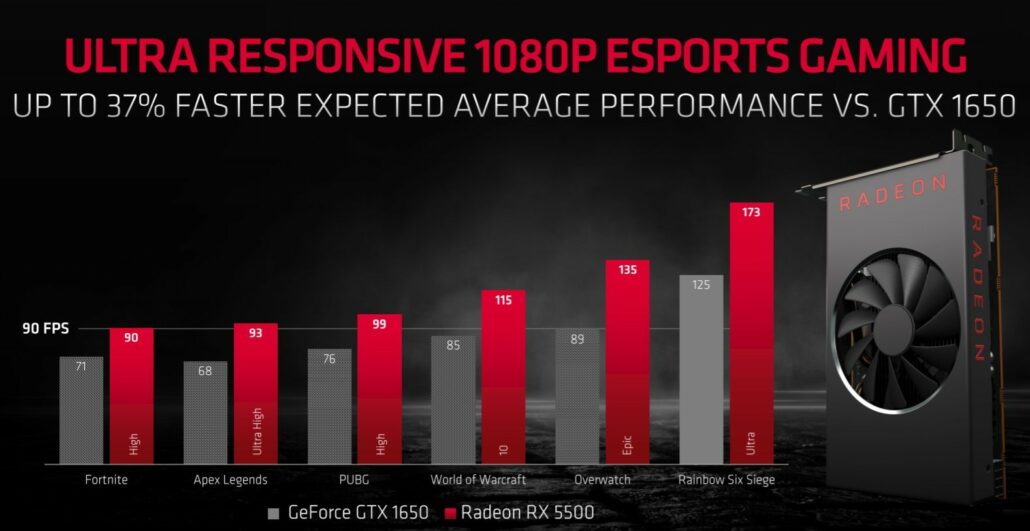 The Radeon RX 5500M is also compared to the GeForce GTX 1650 4 GB mobility solution and completely obliterates it in every benchmark. If AMD could land the Radeon RX 5500M in a decent amount of gaming laptops, they can be a great win for Team Red, especially given the stellar value of Ryzen and Radeon combo laptops. 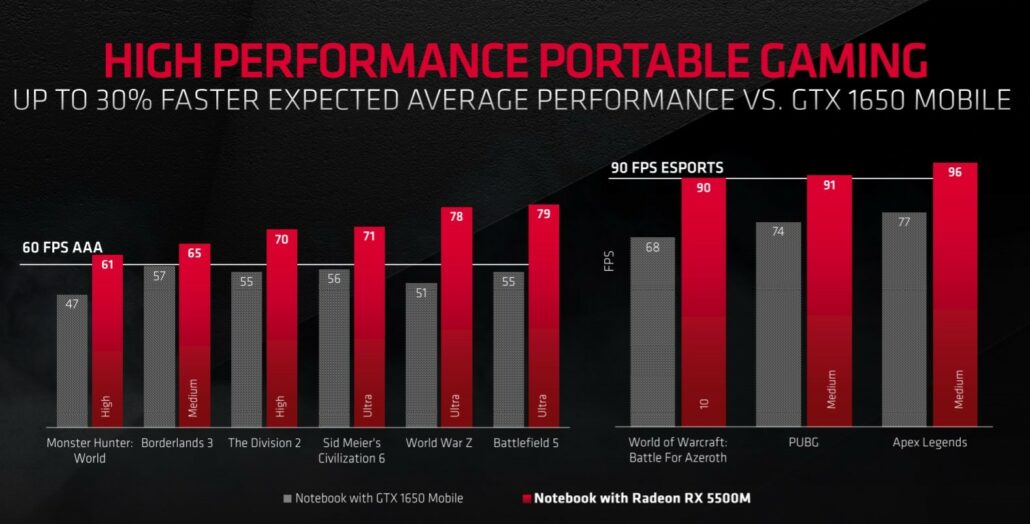 AMD hasn't confirmed the prices for both cards but they have announced a new 'Raise The Game' bundle which allows users to redeem either Borderlands 3 or Ghost Recon: Breakpoint, a fantastic $60 US worth of add on to your purchase.

Expect more details in a bit as AMD officially announces the Radeon RX 5500 lineup. It is also mentioned that the graphics card would be available in custom flavors only so it could be a paper launch today followed by a proper retail debut in the coming days.

Introducing the @AMD Radeon RX 5500 Series, powered by the advanced #RDNA architecture and designed for high-fidelity gaming at 1080p with exceptional power-efficiency, giving gamers the performance they want in the latest titles. pic.twitter.com/GV14eERH6I