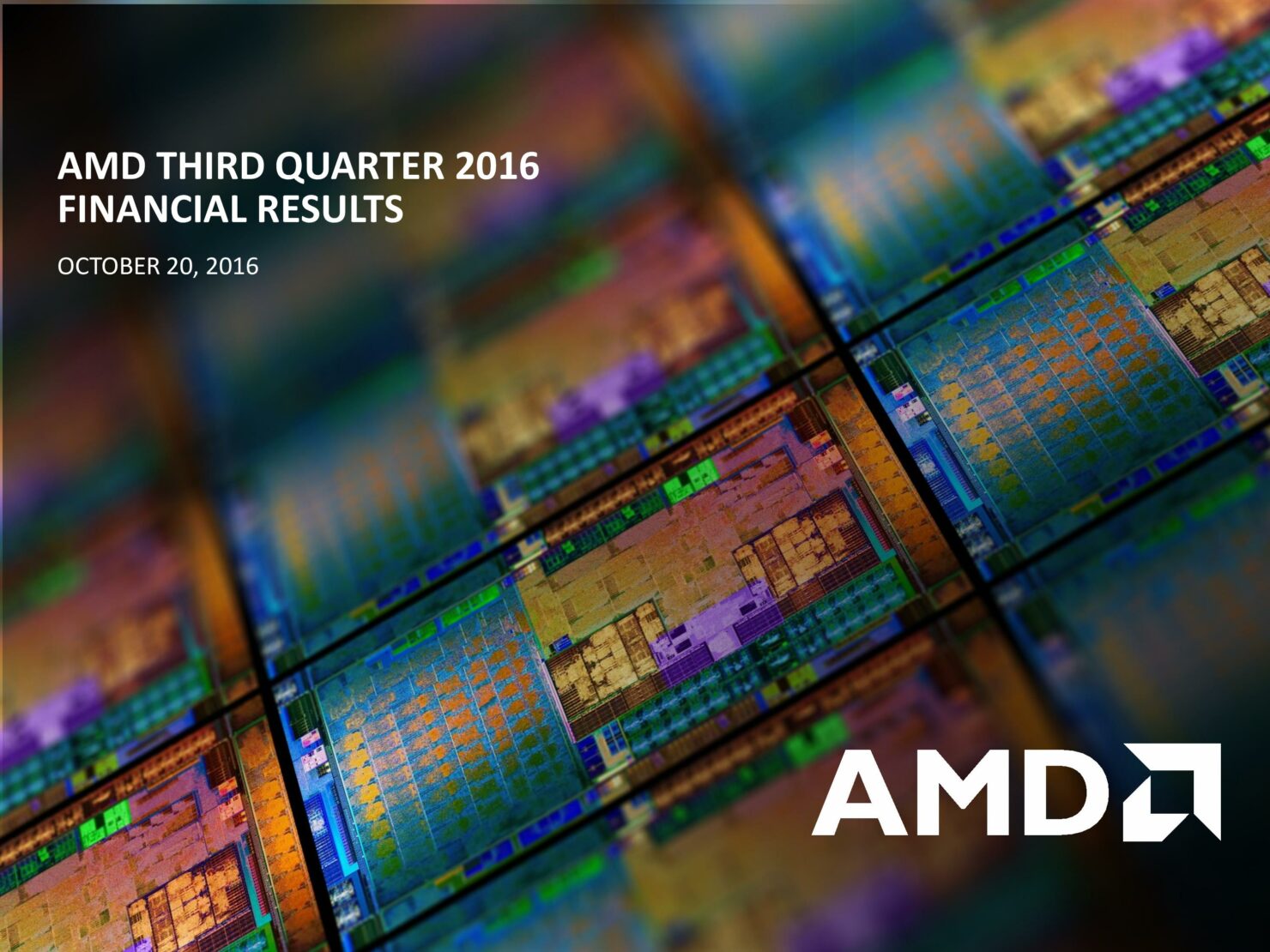 AMD’s third quarter earnings are out and the company has beaten Wall Street’s expectations (on a non-GAAP basis) on both revenue and earnings, posting a non-GAAP EPS of 3 cents a share on a net income of $27 Million. Analysts were expecting non-GAAP earnings to be flat (no profit, no loss). The company also managed to generate a revenue of $1,307 million beating analyst's expectation of $1.21 Billion. of On the GAAP side, the Sunnyvale chip manufacturer posted a loss per share of 5 cents on a net loss of $406 Million.

AMD (NASDAQ:AMD) shares are down more than 5.7% (at the time of writing) as a result of the earnings announcement, because while the company has beaten on both revenue and eps as far as non-GAAP earnings are concerned, the GAAP side of the story paints a slightly darker picture. The primary driver that drove the net loss of $406 Million on the GAAP side was the WSA charge of $340 Million (without which AMD would have gone into 'operating profitability') which was excluded under IFRS guidelines on a non-GAAP basis but is a very real charge for the company to bear - one that is not going away anytime soon.

The Wafer Supply Agreement was amended quite recently and represents a material 'special charge' for the company to bear on an ongoing basis. This is why even though it's being classified as such, the nature of the agreement makes this very much an operational expense and quite significant to investors. The new terms of the agreement have put quite a lot of financial hoops for AMD to jump through including an array of monetary payments to GlobalFoundries. For more information, you can read our exclusive deep dive into WSA and its impacts.

AMD (NASDAQ:AMD)'s CEO had the following to say:

"Our third quarter financial results highlight the progress we are making across our business," said Lisa Su, AMD president and CEO. "We now expect to deliver higher 2016 annual revenue based on stronger demand for AMD semi-custom solutions and Polaris GPUs. This positions us well to accelerate our growth in 2017 as we introduce new high-performance computing and graphics products."

Another thing that we have covered in the past is the fact that AMD received approximately $1.4 Billion after a seasoned issue of common shares and convertible senior debt but this was used to pay off outstanding debt. Approximately $796 of outstanding term debt has been retired as well as $226 Million of outstanding ABL balance using the net proceeds of $1.022 Billion. Since the company does not have any Term Debt maturities till 2018, the company's strategy here is to minimize its payables for the coming few years (the load will be replaced by the WSA charges to some extent) while it rolls out what could be the most important product for the existence of its ongoing concern: Zen.

Now let's talk a bit about how the different segments did. The Computing and Graphics segment (which consists primarily of Radeon Technologies Group) saw its revenue increase 9 percent sequentially and 11 year over year, which is a very healthy growth rate considering the backdrop of the "diminishing" PC industry. The real rock stars of the company (NASDAQ:AMD)'s earnings, however, was the Enterprise, Semi-Custom and Embedded segment which generated a revenue of $835 Million and saw a growth of a massive 41 percent sequentially and 31 percent year over year. This was driven primarily by sales of semi-custom SOCs (think consoles). This is one trend that will hopefully continue for the foreseeable future since not only has AMD managed to bag the contract for the PS4 Pro but with next generation consoles such as Xbox Scorpio and console refreshes coming more frequently than before, this is a very lucrative business and AMD is in the dead center of it. The company is also increasing its focus on the enterprise segment through the introduction of Zen based server chips such as Naples.

And on that note, I would like to conclude by saying that AMD (NASDAQ:AMD) has never been in a better position to turn the ship around, yet practical constraints like the amended WSA agreement make that very difficult to happen. And of course, the one thing that goes without saying: Zen is crucial to AMD's success as a company. This is the first architecture after the now outdated Bulldozer architecture and marks a very different approach for the company in terms of its compute implementation. A lot is riding on Zen and the company needs to get everything just right if it's to preserve the investor's confidence.