Exclusive: A Critical Analysis of AMD’s Multi-Year Amendment to The Wafer Supply Agreement 2016 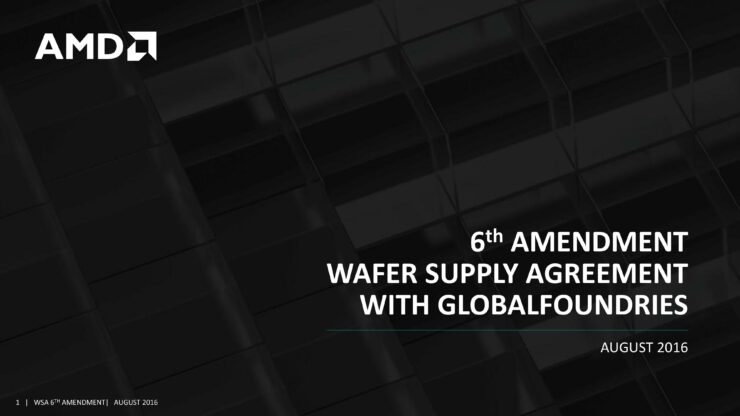 Advanced Micro Devices (NASDAQ:AMD) recently announced that it has amended the Wafer Supply Agreement with GlobalFoundries. The multi year amendment to the famous WSA will last for for the period of January 1st to December 31st 2020. The Wafer Supply Agreement is the contract that governs the strategic alliance of AMD and GlobalFoundries and has been present since the spin off in 2009. The involved parties in the contract are GlobalFoundries, AMD and Mubadala Development Company - which owns 100% of Global Foundries and currently owns 17.84% of AMD.

Before we enter into the nitty gritty of things, lets go over the highlights of the amendment. In addition to modifying certain terms of the WSA applicable to AMD's microprocessor, graphics processor, and semi-custom products, the amendment:

In partial consideration for these rights, AMD (NASDAQ:AMD) will:

AMD expects to record a one-time accounting charge in the third quarter of 2016 of approximately $335 million comprised of the $100 million payment and the $235 million value of the warrant.

The amendment is of a very material nature to the outlook of AMD but before we get into that it is interesting to point out that this is one of the more significant amendments to the WSA that has happened so far. It comes almost a year after the amendment of 2015 and will officially be filed as the "The Sixth Amendment to the Wafer Supply Agreement". A copy of the filing is not currently available but AMD has promised to attach one with its next quarterly results.

The initial point of the contract was to make sure that AMD continued to buy a set quantity of wafers from the foundry every year and not simply shift to other foundries after the spin off. With almost every amendment AMD has attempted to re-adjust the grip of the WSA and paid corresponding monetary compensation according to the terms for doing so. Unlike the previous amendments however, this particular contract changes quite a few things for the duration it will stay active. The original Wafer Supply Agreement stated that it will stay active no longer than the year 2024, and this particular amendment will end on 2020.  One thing is for certain though, it would seem that AMD is not as confident in the capabilities of GlobalFoundries as it once might have been. 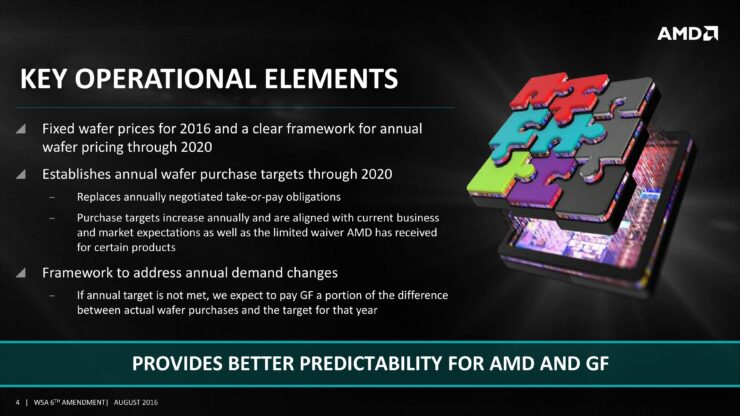 The first and foremost change that you will notice in the amendment is that it offers Advanced Micro Devices  (NASDAQ:AMD) "flexibility" in terms of the wafers it is required to buy.

Of course, then you have the two one-time charges that AMD will be recording in connection to this deal:

The amendment also has interesting implications. Zen is critical to AMD's success and quite possibly its ability to stay afloat going forward. It can be argued that the company remaining a going concern depends on Zen not being a failure. With that context in mind, it is easy to see why AMD might be looking to diversify its options in case GlobalFoundries does not perform. While that does hint at the fact that the company might not be happy with the foundry at the moment, it is not something we can say for sure. It goes without saying though that with this amendment in place AMD is now free to look to either TSMC or Samsung to source a portion of its future portfolio of GPUs and CPUs. It is worth noting at this stage that Nvidia has also chosen to pursue a similar strategy and reached out to Samsung to diversify its foundry capabilities along with TSMC.

Since GlobalFoundries and Samsung share the same 14nm process, it is more probable that the amendment will be utilized to harness TSMC's ability to create high powered SOCs at the 16nm FinFET node. This amendment will also serve as a fail safe option for AMD's Zen processors - which are due to land sometime in early 2017. This is also the same year, that the penalty clause for Global Foundries comes into place. To put the entire structure of the amendment into perspective AMD will be paying the following payments on the purchase of a single hypothetical wafer not fabbed at GloFo:

If you combine the above costs which are dependent on the volume of wafers with the one time charges ($335 Million Value) already incurred in the para before, we start to see that AMD is paying quite a heavy price for the “flexibility” to lean away from GlobalFoundries. This might at first glance appear to imply a somewhat bearish outlook to the company but the fact that the warrant Mubadala has bought has intrinsic value right now and will be more profitable if AMD (NASDAQ:AMD) performs even further, and considering these are companies which are probably well versed with AMD fundamentals and its future road maps, it helps negate some of that impression. Even though this is the first time penalties have been structured this way (the company has previously produced chips at TSMC without a double jeopardy penalty) the fact remains that at the end of the day, AMD now has the ability to choose from all three major pure play foundries for its 16nm/14nm and 7nm chip designs which reduces much of the foundry associated risk with its future Zen offerings as well as high end GPUs.

Analyzing the warrant issued to the Mubadala owned company

Here is the thing though, it is apparent that the warrant - which is basically an option for 75 Million shares of AMD Common Stock - has been issued to the Mubadala owned company as an additional compensation for amending the WSA. Before we get into the details surrounding the warrant its worth noting that even though AMD will be taking an accounting charge, this move shows that Mubadala is confident in the outlook of AMD since the warrant not only has intrinsic value but if AMD's stock price continues to do well it will be even more prfitable. This is why, the warrant can also be construed as a vote of confidence from Mubadala which already owns a significant share of AMD. 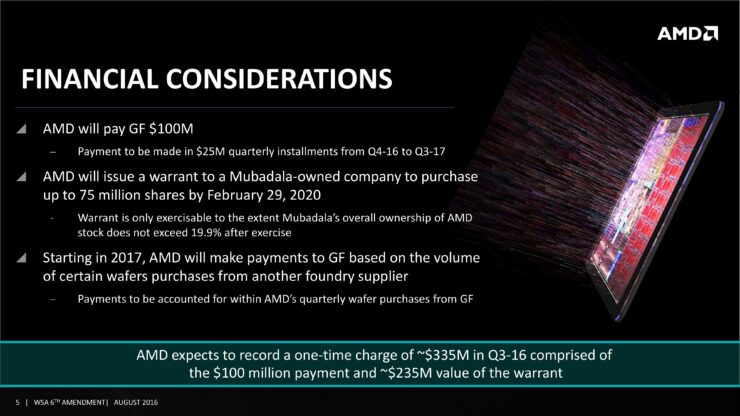 The first restriction regarding the warrant is that Mubadala and its subsidiaries cannot own more than 19.99% of AMD. Since West Coast Hitech L.P is a wholly owned subsidiary of Mubadala Development Company - this means that:

There is also an added caveat associated with this warrant: this is not simply an In The Money (ITM) American option given to them that can be exercised immediately.  Consider the fact that AMD's Shares Outstanding are roughly 795.5 Million (795,557,811 Shares to be precise) and with ownership at 17.84% Mubadala and its subsidiaries own roughly 141.9 Million shares.

With that in mind we can continue towards another interesting fact present in the press release by AMD. The company has taken an accounting charge of $235 Million for a warrant of 75 Million shares. This information coupled with the strike price of the warrant - which stands at $5.98 - allows us to reverse engineer the TWAP (Time Weighted Average Price) that AMD has used to compute the charges.

As to how AMD arrived at this average price is probably a venture into the speculative. But since a warrant closely resembles an American call option, the Binomial Option Pricing Model is something that can be used to arrive at a close enough approximation of the method AMD has used. In fact we were able to reach a close enough figure by using the implied volatility numbers given for AMD (65%), the current stock price $7 at the time of writing the option, the federal funds rate (0.5%) and the full time limit of the warrant. Of course, the standard binomial model tends to get less accurate the further out the expiry is so it only serves as a reasonable approximation to the model actually used to calculate the TWAP.

Also keep in mind that Warrants are usually dilutive in nature. This means that at the time of execution, and after the additional shares are floated, the stock price of the stock is adjusted automatically so the total Market Capitalization remains roughly unchanged. Of course, since we are dealing with an OTC derivative, the exact nature is hard to guess at. That said, if the warrant is not dilutive in nature, then AMD needs to buy back the shares at market price and create a reserve - which they will then sell to Mubadala. If that is the case then it will of course result in a very risky position on their books unless they have already accumulated their reserve. Our figures for the AMD Free Float show that this is probably not the case, but naturally, its possible that they haven't been updated yet and don't reflect the situation accurately.

Cyber Week Sale – Buy MS Office And Get Windows 10 For Free, Only 3 Days Only Left!