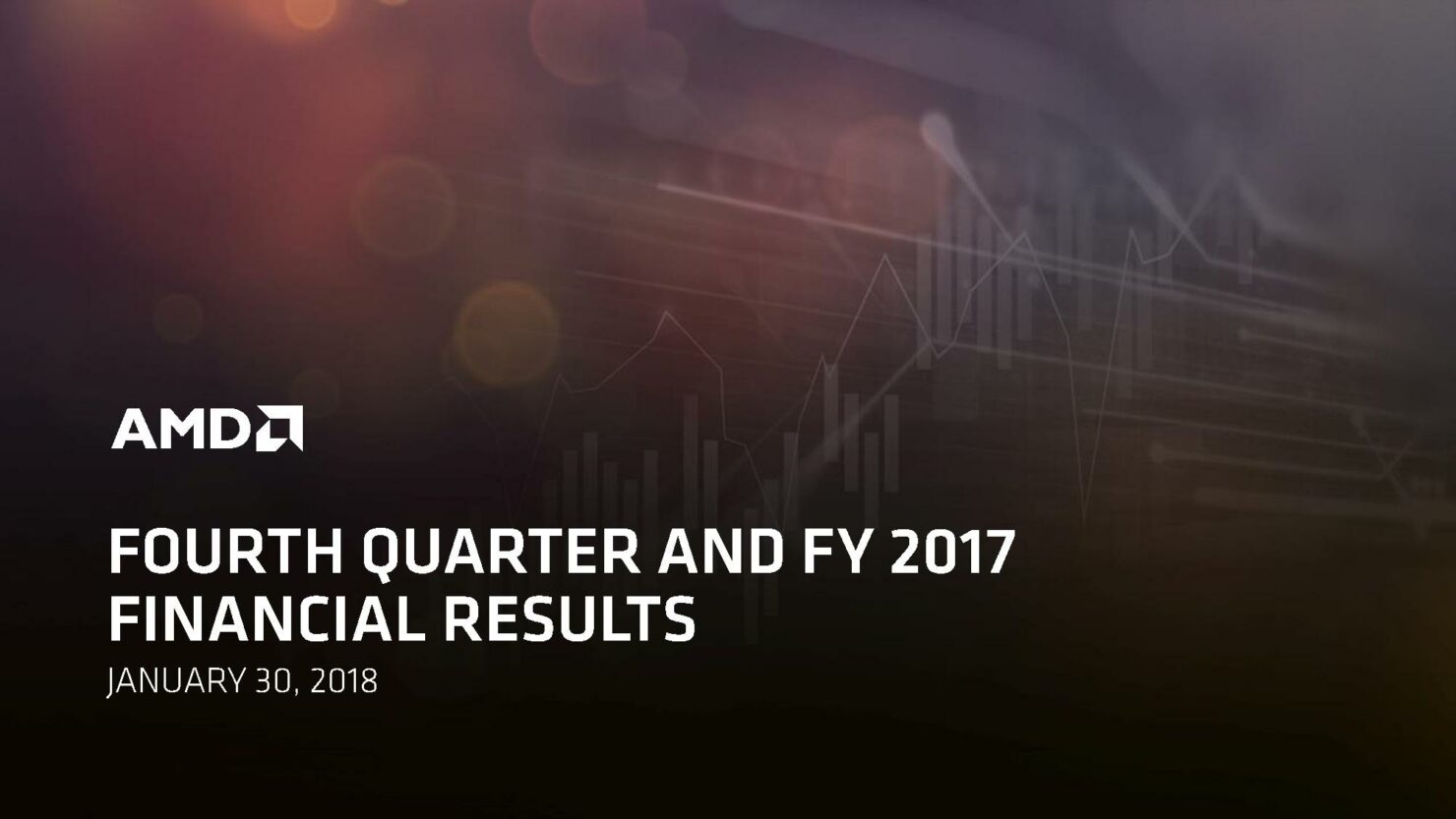 AMD announced its fourth quarter results the day before yesterday and we thought it was time to do an earnings and fundamentals analysis on the phenomenal results. The red giant announced revenue for the fourth quarter of 2017 of $1.48 billion, operating income of $82 million and net income of $61 million or diluted earnings per share of $0.06, non-GAAP diluted earnings per share was $0.08. 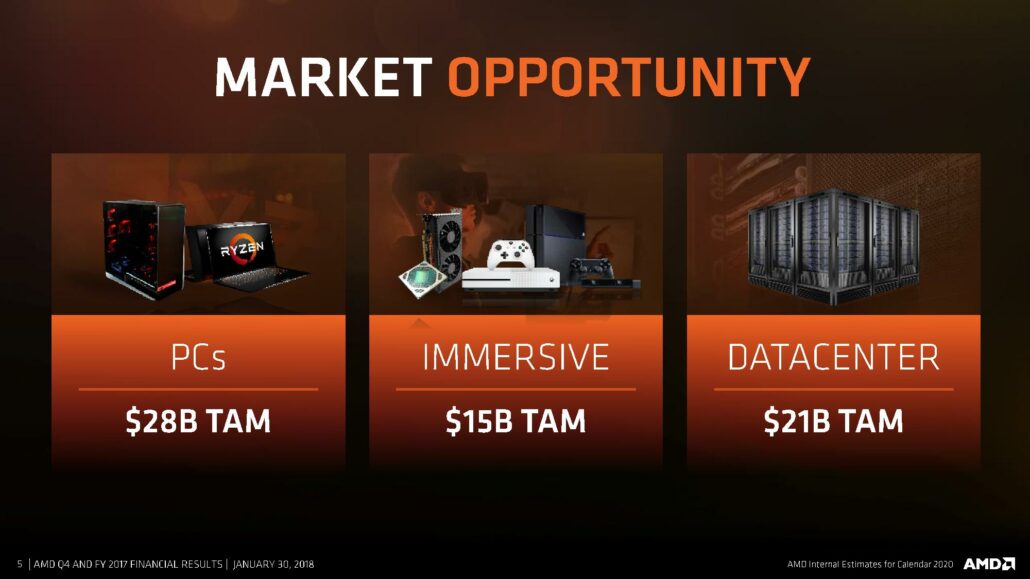 Notably, this is the first year in quite some time that the company has reported a profitable quarter (with 43 Million to spare). For fiscal 2017, the Company reported revenue of $5.33 billion, operating income of $204 million and net income of $43 million or diluted earnings per share of $0.04. Non-GAAP diluted earnings per share was $0.17. Without any further, here's the breakdown:

Disclaimer: At the time of writing, the author owns no long or short position in AMD or related semiconductor stocks, nor plans to take one for the foreseeable future.

It has been an absolute rollercoaster of a ride for the company and it looks the stock is finally on the path to take flight in 2018. The company's management, against all odds, not only managed to return to competitiveness in the x86 sector but was able to give Intel a run for its money in performance department for a short period of time while it reacted to the disruptive Threadripper platform this year. The comapny's Zen architecture has been an absolute goldmine and is singlehandedly responsible for pretty much every good thing coming the company's way.

Here's the thing however, the TAM for Zen based products such as EPYC, Ryzen Mobile and Threadripper are nowhere near saturation. In fact, an argument can be made for the exact opposite. We expect to see AMD occupy a lot more market spaces with its data center efforts pushing into the corners and possibly even overthrowing Intel (in small to medium enterprises that are spooked by the Meltdown/Spectre problem). If the company manages to close a deal with the big cloud companies like AWS and Google Cloud, it could result in a huge windfall and considering with AMD its usually a matter of a few millions which makes or breaks the quarter, we expect to see good things going forward.

Another very important segment that we want to talk about is the Ryzen and Vega synergy. Ryzen mobility as well as the Kaby Lake G platform will both be huge cash cows for AMD in 2018. The Ryzen mobility platform was not fully seeded in 2017 and Kaby Lake G launched just recently. The full impact of both will be felt in a much stronger manner in 2018. Not to mention that the company plans to focus a lot more on its CPU division and introduce some micro-architecture refinements in Q1 2018.

Finally, there is the industry signal that easily favors AMD: cryptocurrency mining. AMD's RX Vegas are absolutely insane at XMR mining. In fact, one RX Vega can mine more than a $3000 TITAN V card and can pay back its original ROI in just under 6 months. Since the cryptocurrency market is currently stable, we can expect demand for GPU mining to stay for the duration of 2018 at the very least (assuming of course that the overarching cryptomarket doesn't correct heavily to unsustainable levels).

AMD (NASDAQ:AMD) for the bears: Graphics card performance crown conceded to NVIDIA for the year of 2018, new leadership adjustment and uncertainty with RTG, lawsuit woes

Disclaimer: At the time of writing, the author owns no long or short position in AMD or related semiconductor stocks, nor plans to take one for the foreseeable future.

This is also where we see the first semblances of risk for the company. A bubble burst in the crypto space could have severe consequences for the graphics card segment as the markets will become flooded with cheap second hand GPUs from mining operations with revenue streams drying up for the company.

Secondly, the company has confirmed that it has no plans to roll out a Vega successor in 2018. We have it on good authority that the Vega successor will tape out in Q4 2018, which means you should see the final product hitting the shelf sometime in 1H 2019. This of course means, that the situation is now inverted. Where once AMD was very competitive in the GPU space (to NVIDIA) and lagging behind in the CPU space (against Intel), the situation will now be the opposite. NVIDIA will hold the performance crown throughout 2018 and can put a few more miles in the headstart it currently has on Radeon GPUs. The company can try to mitigate this by going for the value proposition but there is only so much you can do that.

This is why the company is exposed to even further risk with cryptocurrency mining - because without that, the RX Vega will probably not bring home alot of sales at the retail pricing levels (which are usually $200-400 above MSRP even under usual conditions). Another point of note is that Raja Koduri, a long time leader of RTG has left the company and that will have morale based consequences for the RTG division. New leadership has been already recruited but it remains to be seen how well they will gel into the company and just how much they can fill in the shoes that Raja left behind.

Verdict: We believe that the bullish indicators currently outweigh the bearish indicators for AMD and expect that the stock will show significant growth in 2018. Key indicators of strength and weakness that investors need to look out for are: signs of cryptocurrency market collapsing, launch of Ryzen refresh, EPYC design wins as well as Ryzen Mobility OEM numbers. 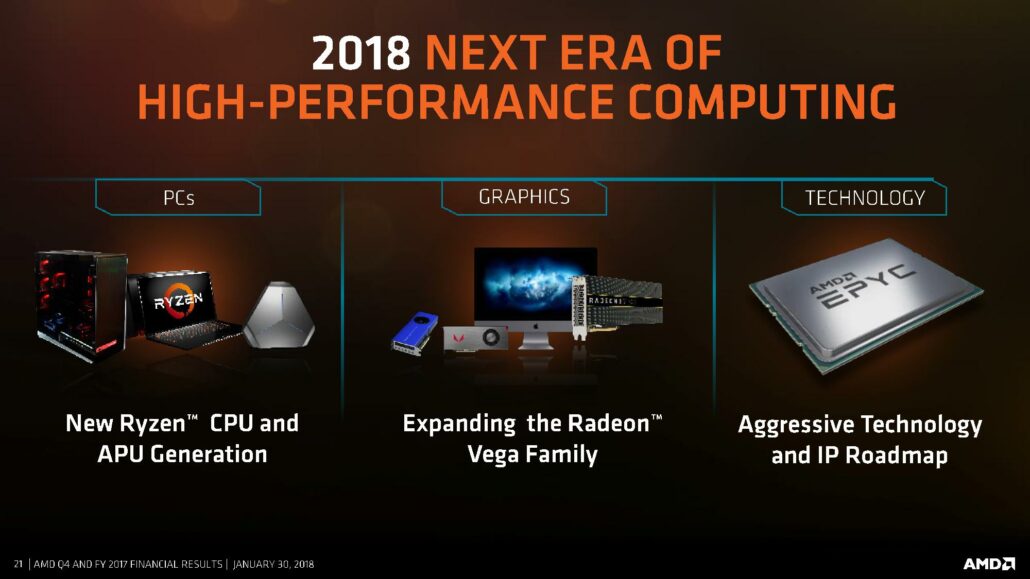 Guidance for Q1 2018 and the year-over-year comparison are under the new revenue recognition accounting standard (ASC 606). AMD is adopting the new revenue recognition standard by applying the “full retrospective” method. For comparative purposes under the new standard, Q1 2017 restated revenue was $1.18 billion and Q4 2017 restated revenue was $1.34 billion. For fiscal 2018, AMD expects the impact of the new standard on revenue to be immaterial.