An entry of AMD's Polaris 10 GPU, the flagship of the Polaris family, has just been spotted on the SiSoft Sandra benchmarking database. Polaris 10 is one of two Polaris GPUs, the other being Polaris 11. The entry in question has a valid result and includes the specifications for the Polaris 10 GPU. Namely the GCN core count, memory interface, capacity and clock speed.

Despite 11 being a larger number than 10, Polaris 10 is actually the larger GPU of the two. Chief Architect & head of AMD's Radeon Technologies Group confirmed that the naming scheme is time-based & Polaris 10 had simply been designed before Polaris 11, hence the smaller numerical designation.

Polaris 10 is AMD's mid-range 14nm FinFET graphics chip, Polaris 11 is the smallest of the family and Vega 10 is the HBM2 powered high-end flagship 14nm GPU launching in 2017 to succeed the Fury lineup. It will feature AMD's next generation Vega architecture and will be the company's first GPU to feature second generation High Bandwidth Memory.

2304 GCN cores is actually less than the R9 390, but the GCN 4.0 architecture is significantly more powerful overall according to AMD's head of the Radeon Technologies Group and Chief Architect Raja Koduri.  So just like the transition from Kepler to Maxwell we're going to see core counts go down and performance go up.

This particular Polaris 10 chip carries the 0x67DF device ID, which according to AMD's recently released driver source code indicates that we're likely at the cut down variant of Polaris 10. Which means that we're looking at the Polaris 10 GPU configuration that we're going to end up seeing as the RX 480 rather than the RX 480X. The latter will end up with more GCN cores and higher performance. 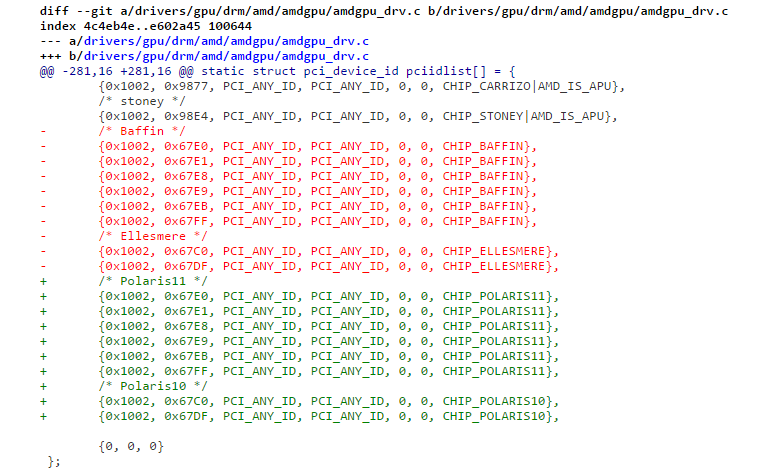 The full Polaris 10 GPU with the deviceID 0x67C0 will possible feature 2816 GCN cores like Hawaii XT. The driver source code also confirmed that Polaris 10 is indeed Ellesemere and Polaris 11 is Baffin. Both of which are Arctic Islands GPU code names that we had covered extensively for so long.

There's no entry for the full Polaris 10 chip in the database just yet so we don't know how many GCN cores it will feature, 2816 being a safe guess. Seeing as how the R9 390 & 390X perform remarkably close to each other AMD will have likely decided to distance the RX 480X further from the RX 480. Similar to how the R9 Fury has 512 fewer GCN cores compared to the Fury X, unlike the R9 390 which only has 256 fewer GCNs compared to its big brother the R9 390X.

The SiSoft entry also includes the clock speed of the card, which at 800Mhz is surprisingly low. So we're likely looking at an early engineering sample here. Especially considering the fact that 14nm FinFET clocks much higher than 28nm. So I'd expect frequencies upwards of ~1150Mhz on the production chips.
With that in mind, the GPU actually did well in the benchmark and came ahead of the GTX Titan Black. Which features a full GK110 chip and coincidentally is faster than a 2816 GCN core Hawaii XT GPU. Also funnily enough this is very close to the performance we've seen from the leaked GTX 1080 and GTX 1070 benchmarks.

Despite the low clock speed & the lower number of GCN cores this particular configuration of Polaris 10 still performed ahead of where you'd expect an R9 290X to perform. This in turn indicates that 4th generation GCN cores perform measurably better per clock than their predecessors.

Also worthy of note is that this Polaris 10 engineering sample features 6Gbps GDDR5 memory chips rather than GDDR5X which combined with a 256bit bus delivers 192GB/s of bandwidth. Exactly half the memory bandwidth of the R9 390 and 390X, which indicates that production Polaris 10 cards could feature 12Gbps GDDR5X memory instead to deliver the same amount of bandwidth.

Speaking with Venturebeat.com Raja asserted that both Polaris 11 and Polaris 10 are “extremely power efficient”.  He continued to say that these GPUs and the Polaris architecture in general will deliver “our most revolutionary jump in performance so far”. Which are mighty exciting words for Radeon enthusiasts coming from the head of AMD’s Radeon Technologies Group.

It's true that we will have to wait until next year for HBM2 GPUs from either Nvidia or AMD. Nvidia's GP104 powered GTX 1080 and GTX 1070 cards - not official names - are reportedly configured for GDDR5X. And there's virtually no chance of neither Nvidia or AMD risking production of large GPUs like GP100 or Vega 10 this early in the nodes' lifecycles. Neither 16nm or 14nm will be mature enough for large GPU launches this year. This is all assuming HBM2 production has already sufficiently ramped up, which hasn't yet.

Despite that, what we're getting this year is still going to deliver a very significant jump in performance, performance per watt and performance per dollar. This is thanks to the much needed arrival of FinFET manufacturing technology as well as GDDR5X.

This update to the GDDR5 memory spec is simple enough. Double the capacity and double the data rate of GDDR5 with minimal alterations to the protocol. That in turn means existing GDDR5 memory controllers will only need minor design updates to be compatible with GDDR5X. Which saves Nvidia and AMD a lot of engineering effort and cost. Double the bandwidth also means GDDR5X will do more than an adequate job of keeping faster, bigger, next generation FinFET GPUs happy and well fed until HBM2 arrives in 2017.

At double the speed of GDDR5, a GPU configured with a 256bit memory interface can have access to up to 448GB/s of bandwidth and 8GB of memory. That's double the bandwidth available to the GTX 980 and twice the capacity. It's also 33% more bandwidth than what's available to the GTX Titan X. With that in perspective GDDR5X is clearly going to be more than enough for Nvidia's GP104 GPU and AMD's Polaris 10 GPU.

It's not every day that we get GPUs with 2.5x better perf/watt, in fact not ever. This is the biggest jump from one generation to the next that we have ever seen. But it's not all about efficiency, Raja is also promising the "most revolutionary jump in performance so far”.

Raja Koduri revealed at Capsaicin that AMD's focus with Polaris is all about giving gamers a "sweet" performance per dollar deal. And this is exactly what Polaris 10 and Polaris 11 will do. AMD announced that Polaris graphics cards are going to be released mid 2016, this summer. AMD's CEO Lisa Su later elaborated further, saying that Polaris graphics cards will be available on shelves and in notebooks before the back to school season this year.

There's also been a lot of buzz around Nvidia potentially demoing Pascal at GTC in April, with GTX 1080 and GTX 1070 - not official names - graphics cards launching in the summer. AMD has already demoed Polaris 11 at CES and Polaris 10 at GDC, so we can't wait to see Pascal in action. Hopefully next month.