AMD is allegedly preparing a next generation GPU with built-in hardware support for ray tracing code named Navi 23 that's internally referred to as the 'NVIDIA Killer' and it's due to come out next year. We've heard whispers about this Navi 23 GPU in the techsphere as early as back in August of this year, but we've only gotten confirmation that it actually exists about a week ago when it crept up in a Linux code dump.

Thanks to a recent Linux driver we know that Navi 23 is only one of three different RX 6000 series GPUs that Radeon is building on TSMC's 7nm+ process node and the RDNA2 gaming graphics microarchitecture, the others being Navi 21 and Navi 22.

Based on a number of peculiar patents that AMD has registered as well as whispers in the industry and AMD's own official roadmap, the 2nd generation Radeon DNA architecture is set to be the first from the company to fully support hardware accelerated ray tracing.

However, according to this particular source, only Navi 23 is being referred to internally as the "NVIDIA Killer". That's because Navi 23 is said to be the big Navi GPU that's going to take the competition to NVIDIA in the high-end segment where the RTX 2080 and RTX 2080 Ti currently sit uncontested.

I'd urge caution here though, as this is just a rumor and should be taken with a grain of salt. Companies usually don't refer to one of their products as the competition killer, and on the rare occasion that they do it's often a hit and miss. Big Navi is definitely set to compete and add value to the high-end graphics market but don't expect it to "kill" anything, not yet at least. It's just too early to tell how competitive this GPU is going to be. Especially with NVIDIA's Ampere around the corner, which looks to bring quite a sizable generational leap from Turing.

Based on everything we've been hearing so far Navi 23 is going to be a large GPU that competes in the high-end segment in 2020. It is expected to bring full hardware accelerated ray tracing as well as a plethora of new architectural improvements.

Which thanks to some recently published patents we know could include: 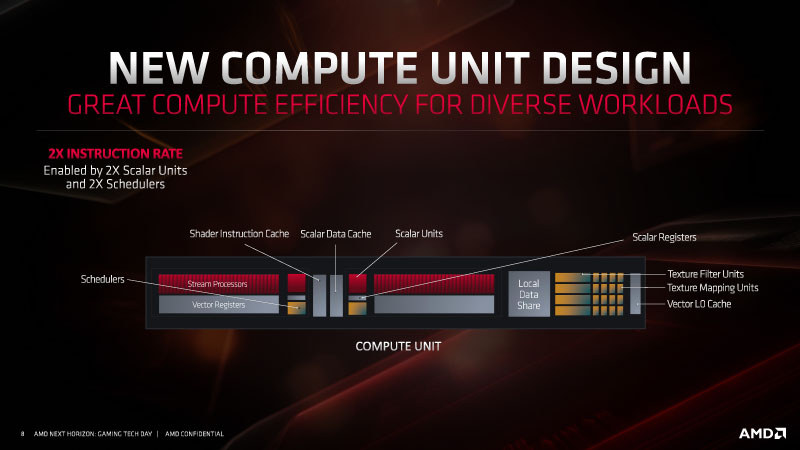 AMD's CEO Lisa Su confirmed at the company's latest earnings call that the focus with its next generation products next year will be the architecture and not the process node. 5nm is years away from being ready for prime time and 7nm is here to stay for quite a while. AMD is already past the most difficult part of a process transition, that is bringing the first set of products on a new node to market successfully, which the company did with the Ryzen 3000 series and Navi this year.

Engineers can now focus on making bigger architectural changes and that's what we expect to see next year on both the CPU & GPU fronts. Although this means that AMD will not have the same process lead it enjoyed over both Intel & NVIDIA this year. But luckily for the company Navi 10 is a relatively small GPU and there's room to create a much bigger and more powerful GPU still on 7nm technology.

The trick is going to be in managing power to extract as much performance as possible from a defined 250W budget. Navi 10 is already a thirsty GPU for its relatively small size -- It's 251mm² large (RX 5700 XT) and pulls as much power as the 545m² large TU104 (RTX 2080) -- and the real challenge for the red team is going to be in bringing their architectural power efficiency much closer to parity with NVIDIA to have any real chance at competing not just in the high-end but against NVIDIA's new 7nm Ampere graphics card lineup next year.

One thing is for sure, 2020 is going to be an exciting one and we can't wait to see how both the CPU & GPU markets shake up.