2016 is all about virtual reality with Oculus starting the year by announcing pre-order pricing for its Rift and HTC following suit with its $799 Vive head mounted display. Valve went one step further by making a benchmark that tests your PC's "VR readiness". Which basically tells you how good of an experience your system will be able to provide with the HTC Vive HMD.

You can download the benchmark on steam, this link will initiate the installation process for you directly via the steam client. The benchmark is comprised of a short and pleasant demo that takes you on a journey into the Aperture Science facilities. At the end of the demo you'll get a score based on how well your system performed. Oh, and you don't actually need a Vive to run this test.

Before we get into the results of the benchmark on both Nvidia and AMD graphics cards let's briefly re-visit the recommended specs for the HTC Vive and Oculus Rift. They actually both have an identical set of requirements. For the CPU you will need a relatively new Intel core i5 processor or an AMD FX 8300 series processor.  You will need at least 4 gigabytes of RAM and 8GB is recommended.

Finally the most important piece of hardware that you will want to pay attention to is the graphics card. The recommended GPUs for both the Rift and the Vive are the Radeon R9 290 from AMD and the GeForce GTX 970 from Nvidia. Faster graphics cards from both AMD and Nvidia do exist like the AMD Radeon R9 390 series ( R9 390 & 390X ), the R9 Fury series ( R9 Fury X, R9 Fury & R9 Nano ) and the GTX 980 series ( GTX 980 & GTX 980 Ti). These will deliver greater performance and an even better, more immersive VR experience.

The roster we're looking at includes eleven graphics cards, all of which are still selling today except for the R9 290 which has been replaced by the R9 390 last year. Looking at the very top end we find the R9 Nano Crossfire setup and the GTX Titan X. It's worthy of note that the highest possible score that the test can give out is 11 and both setups in this case achieve this score. 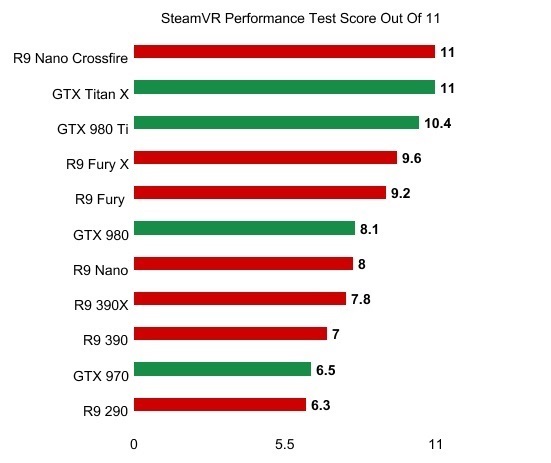 I should point out that scores below 6 fall under the yellow "capable" category rather than the green "ready" category which is what you should be looking for for a smooth, immersive VR experience. Interestingly with the exception of a few overclocked GTX 780 Ti cards most of Nvidia's high-end GTX 700 series graphics cards couldn't qualify for the "ready" status. Frankly we were quite disappointed to discover this. GeForce GTX Titan, 780 Ti and 780 cards that were selling for $500, $700 and even $1000 just a couple of years ago can't keep up in Valve's VR benchmark with the R9 290X and 290 Radeons that sold for $550 and $400 in the same period. 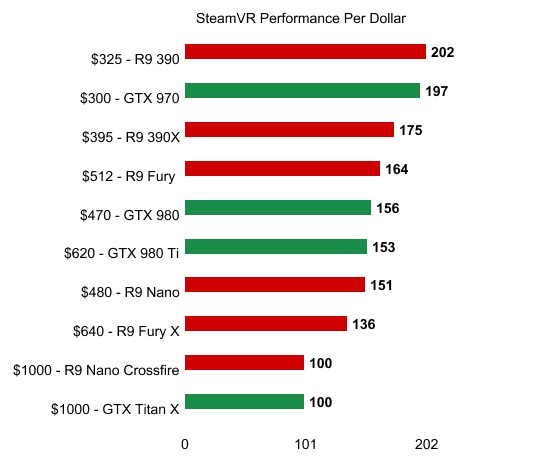 Shifting gears for a bit and taking a look at the level of performance that you'll get for your hard earned dollar. We checked into newegg.com and took the second lowest price we could find for each graphics card. The results aren't all that surprising, the sweetspot ~$300 cards do the best here. Followed by the high-end ~$500 tier cards from both companies. We find the Titan X and the Nano Crossfire setup at the very bottom.  Perhaps if the test would permit scores higher than 11 we might have seen these setups, especially multi-GPU setups do better here.

And with that we're bringing this quick look at Valve's SteamVR performance test to a close. Try the benchmark out and share your scores with us in the comments section below.