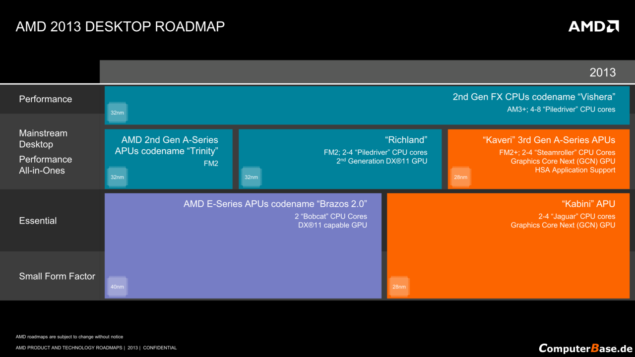 AMD is preparing a new socket known as "FM2+" for their upcoming generation of Kaveri APUs as revealed in a roadmap leaked by Computerbase. The new roadmap shows that AMD would launch their Kaveri APUs in late 2013 which would bring an updated CPU and GPU architecture to the APU platform.

AMD would introduce Kaveri APUs a few months after the launch of their Richland APU platform which would be launched in the upcoming week of June. While Richland would be a minor update over Trinity bringing nothing as new other than faster clock speeds, etc, Kaveri APUs would bring a totally new CPU and GPU architecture to the APU platform.

AMD's Kaveri APUs would be the first to feature the company's 28nm Steamroller architecture which brings higher IPC performance and new instruction set for the masses. The Steamroller architecture would also be featured in AMD's future FX processors platform but not much details are available on that. In addition to the Steamroller architecture, Kaveri APUs would also feature a complete GCN core for IGP which would replace the much older VLIW architecture used on Richland and Trinity processors. The GCN core would be supposedly based on the refined "Sea Islands" version of the graphics chip bringing improved performance and giving AMD a huge lead over Intel's Iris and Iris Pro graphics chip which would ship with their Haswell processors.

The switch from FM2 to FM2+ for Kaveri APUs was expected for a while now. The main reason behind this switch could be the fact that AMD is aiming to bring GDDR5/DDR4 memory to the platform as revealed earlier. While it is still just a rumor, it may infact be true. Talking specifically about the Kaveri SKUs, we are looking at 2-4 core modules which would ship with 6-12 GCN compute units. So performance around the Radeon HD 7790 is pretty much expected from the upcoming chips. While the architecture change sounds great, the most important thing about the Kaveri APUs platform is the HSA foundation built around it and the recently detailed HUMA architectur which would allow the CPU and GPU to communicate more efficiently in a unified manner, similar to what's being done on the PlayStation 4. With such improvements, features and technologies, AMD's Kaveri APU platform is sure to become a great hit. Expect more details soon.