Overclockers from China have achieved the Vishera record overclock by pushing an AMD FX-8350 processor to 7442.83 MHz with the help of liquid nitrogen cooling. This is currently the record overclock for Vishera, although nowhere near the 8 GHz + overclock we saw from Bulldozer last year but it still puts down the Intel 3770K frequency world record which was set at 7184.3MHz.

The overclock comes from mainland China, from where overclockers achieved this frequency on Gigabyte's GA-990FXA-UD7 AM3+ Motherboard. The FX-8350 CPU had two cores enabled and its VCore was pushed to a staggering 1.968V which is only possible through LN2 Cooling. This shows that the amazing overclocking abilities of Piledriver architecture have been passed on from Trinity to Vishera and with a price kept under $200 US, what can be better than an 8 Core which runs that high of a frequency.

Although 7 GHz plus LN2 isn't feasible for all users but with a nice air cooler and water cooling setup, enthusiasts can easily break the 5 - 5.5 GHz barrier with the new FX-Vishera processors. You can find the CPU-z validation here. 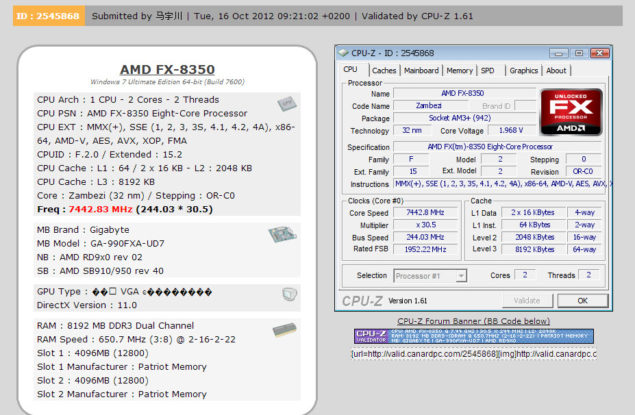 The AMD FX-Vishera along with the flagship FX-8350 would launch on 23rd October. Expect retail availability with in the same day.