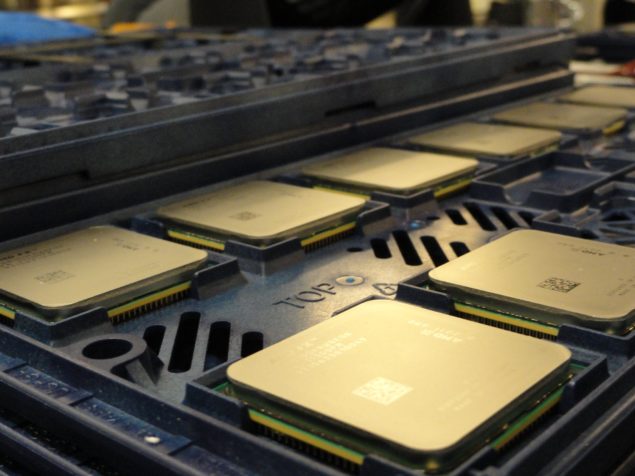 This just in, A Group of professional overclockers from Advanced Micro Devices have set a CPU Frequency World Record. The Record was set on 31st August 2011 during an AMD FX pre-launch briefing  in Austin, TX at AMD Headquarters. The Record was set by an Eight Core Bulldozer CPU "FX-8150" which was overclocked beyond the 8Ghz barrier.

The last Record set by AMD was 7378.25MHz set with a Phenom II 955 Black Edition while the previous world best frequency record was 8.308GHz. The 8 Core Zambezi-FX Outperformed them by a staggering 8.429GHz overclock which is just insane. That Frequency was achieved using Liquid Helium which is even cooler than Liquid Nitrogen at a massive 2.02Vcore. Following is the HWBOT Validation Screenshot:

So what does this proves? Well this shows the performance level which could be Achieved with the Bulldozer chips and shows the improvements of Zambezi Core over the Phenom Architecture. Although no benchmarks have been provided yet but a chip overclocked twice as much as its stock frequency would feature one hell of a performance.

The overclockers also confirm that 5Ghz+ is possible on Air Coolers which fall under the 100$ Price Range which is great news for many Desktop users for hitting high clocks while Enthusiast users can go for Liquid Cooler Setups to overclock beyond that frequencies. The Bulldozer Processors already come at Stock Frequencies ranging from 3.5 - 4.0Ghz. Also note that with retails chips hitting within a month, It wont be long enough for someone to crank past 9Ghz barrier since the members said that touching that frequency is possible.

But this ain't it, Intel's Counterpart i7 2600K also can be overclocked past 5Ghz on Air Coolers. Its the performance and benchmark numbers where Bulldozer needs to show its capability since a few leaked ES benchmarks have not been in favor of AMD much, but the record shows that AMD's upcoming Bulldozer chips are gonna crank some huge numbers.

A few online stores have also started taking Pre-Orders on the chip which you can check here. Head over to the soruce (Overclockers.com) for to check out videos of the Bulldozer chip in action.