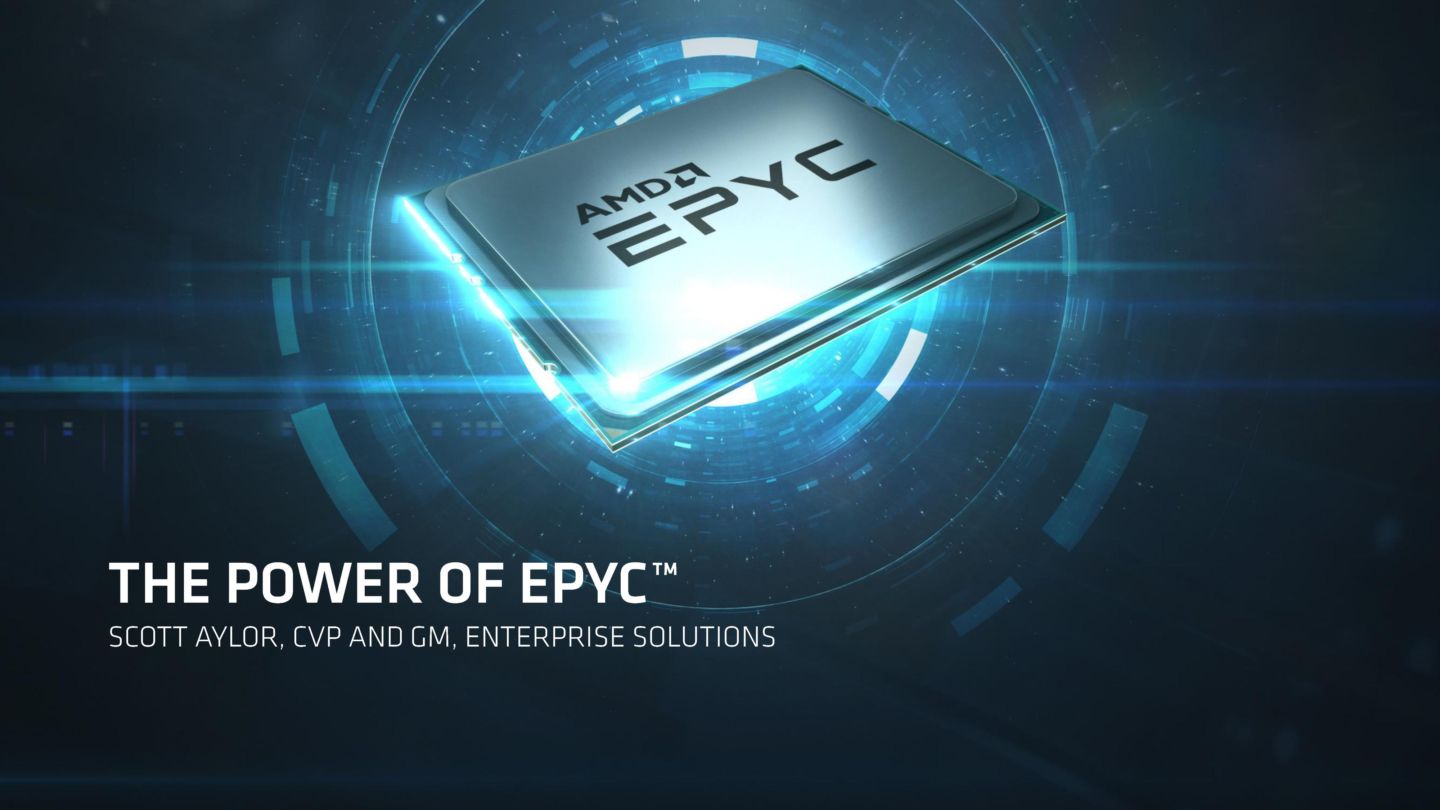 The day which AMD has waited so long for has finally arrived. Today, AMD officially launches their EPYC 7000 series processors. The new processors bring AMD back into the server market which had not seen an AMD server chip in a long time, but now, AMD is back and in an EPYC way.

The EPYC server processors were unveiled at AMD’s Financial Analyst Day along with other tech announcements. Looking at the server market, we can see that Intel remains dominant in server segments with a tight grip due to their Xeon processors.

“With our EPYC family of processors, AMD is delivering industry-leading performance on critical enterprise, cloud, and machine intelligence workloads,” said Lisa Su, president and CEO, AMD. “EPYC processors offer uncompromising performance for single-socket systems while scaling dual-socket server performance to new heights, outperforming the competition at every price point. We are proud to bring choice and innovation back to the datacenter with the strong support of our global ecosystem partners.” via AMD 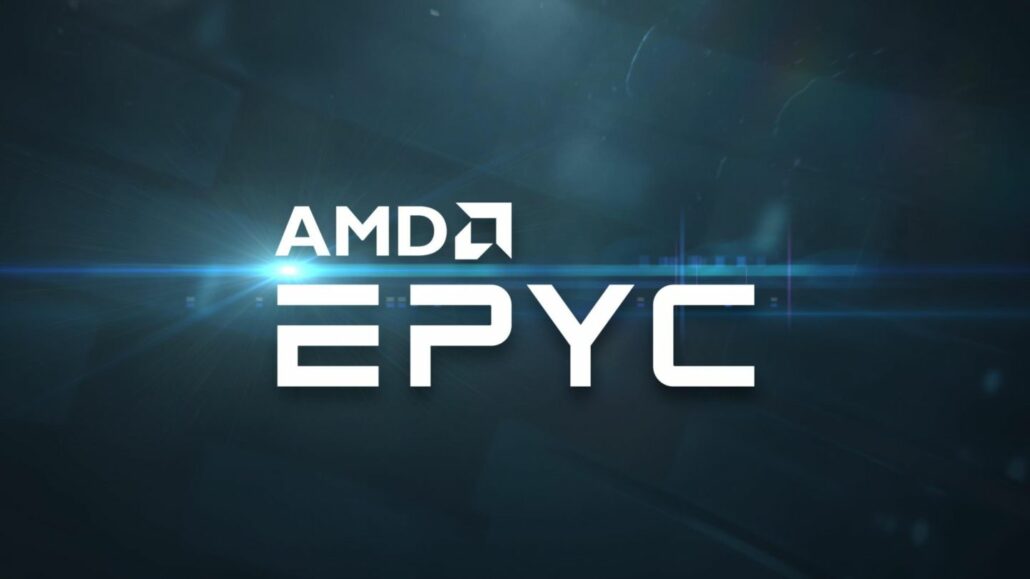 AMD on the other hand used to offer a range of Opteron series processors and had a very decent share, but since Bulldozer, that share has dropped to 0%. After more than 6 years and countless engineering spent in designing both Zen and EPYC, the day is finally here that AMD will be once again offering a competitive solution that is not only great but disrupts Intel's hold in the server market.

AMD is targeting both single (1P) and dual (2P) socket systems which make up for over 90% of the server market share. The processor lineup is based on the foundation of AMD’s Zen core, utilizing a multi-chip package design. The chip is based on multiple Zeppelin dies that are fused with 8 Zen cores. AMD uses up to four Zeppelin dies on their flagship 32 core, 64 thread processor and that offers some disruptive numbers in terms of core count, thread count and I/O.

We will get back to the features in a bit but before we do, let’s take a look at the lineup itself. The AMD EPYC family will be branded as the “EPYC 7000” series and features 12 models. From the 12, only three models are specifically designed to be compatible for single socket solutions while the rest can operate in 2P platforms. 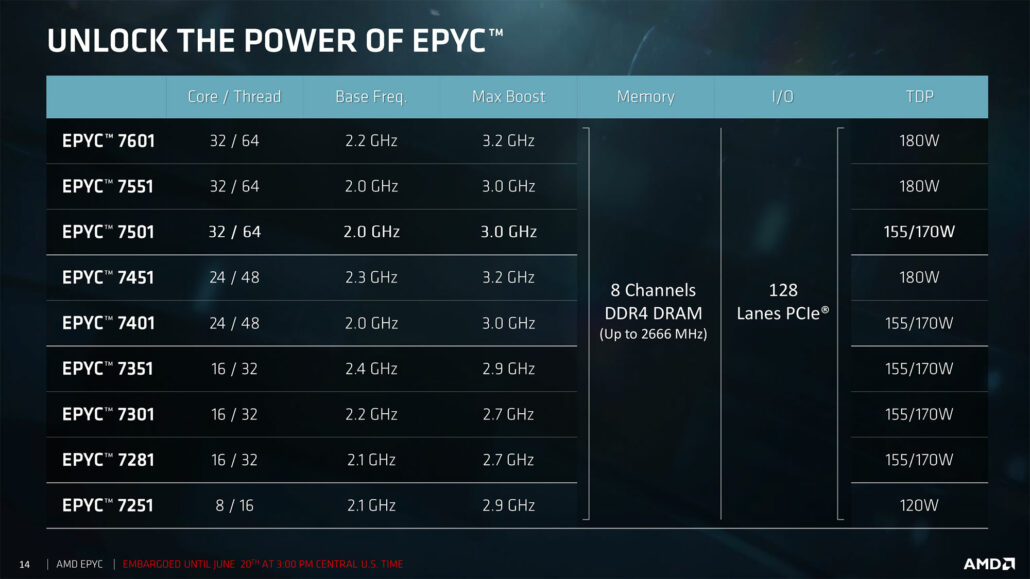 The fastest of the EPYC 7000 series processor is the EPYC 7601 which comes with 32 cores and 64 threads. The clock speeds are maintained at 2.2 GHz base and 3.2 GHz boost frequencies. The TDP is maintained at 180W which is what we are going to get on Ryzen Threadripper processors too. In the single-socket lineup, the fastest chip is EPYC 7551P which also has 32 cores and 64 threads. It’s clocked at 2.0 GHz base and 3.0 GHz boost and features a TDP of 180W. 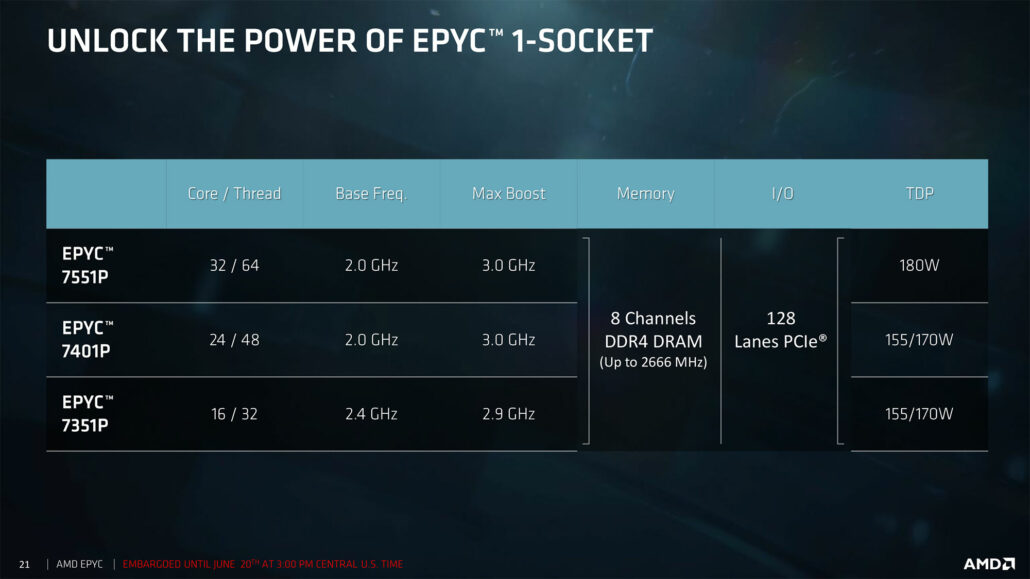 AMD is not only going to take the fight to Intel in the single socket platform but also aims to disrupt the 2 socket market. An EPYC 1S platform will be able to offer up to 50 percent better processor performance compared to an Intel 2S solution. It will also consume less power. Performance and pricing comparison of various AMD EPYC 7000 series processors versus the Broadwell-EP counterparts from Intel is provided in the images below:

As far as these results are concnerned, we should take the marketing claims with a slight pinch of salt as mentioned by many independent tech sites including Tom's Hardware and The Tech Report who had the following to say on this matter:

AMD provided some basic benchmarks, seen in the slides above, that compare its processors to the nearest Intel comparables. The price and performance breakdown chart is perhaps the most interesting, as it indicates much higher performance (as measured by SPECint_rate_base2006), at every price point. It bears mentioning that Intel publicly posts its SPEC benchmark data, and AMD's endnotes indicates that it reduced the scores used for these calculations by 46%. AMD justified this adjustment because they feel the Intel C++ compiler provides an unfair advantage in the benchmark. There is a notable advantage to the compiler, but most predict it is in the 20% range, so AMD's adjustments appear aggressive. We should take these price and performance comparisons with the necessary skepticism and instead rely upon third-party data as it emerges. 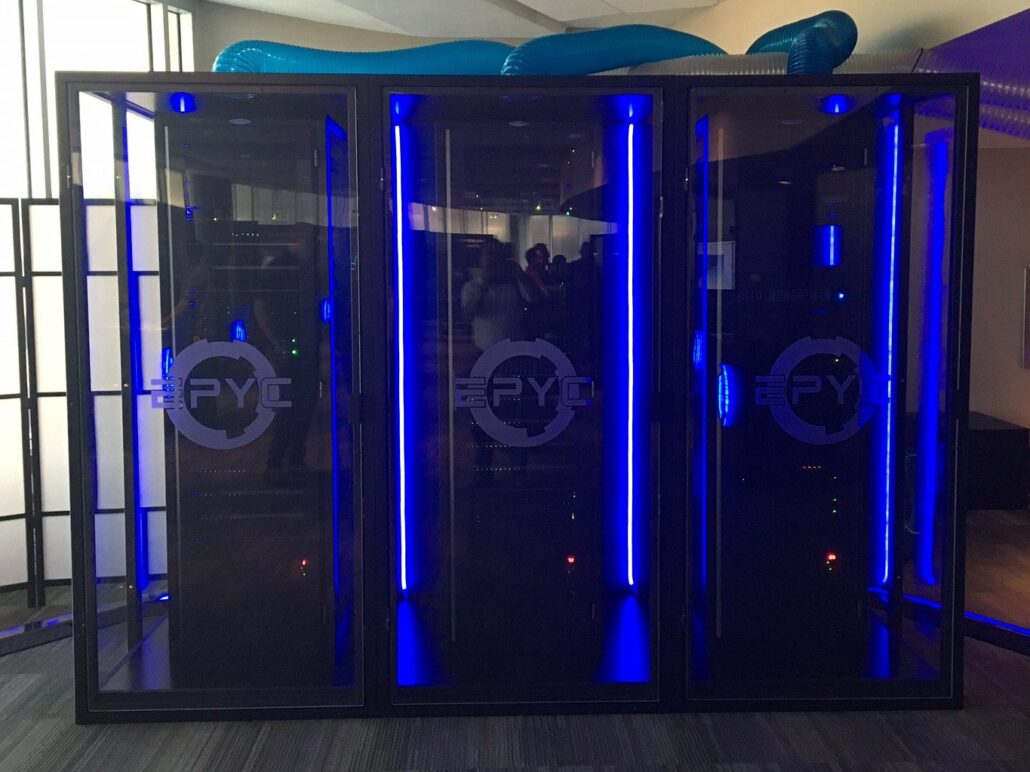 AMD EPYC processors also fuse infinity Fabric die-to-die and socket-to-socket interconnect which allows for a fully connected and coherent link for the chip to communicate with the different dies and even the sockets. In 1P solutions, the Infinity Fabric interconnect will offer 42 GB/s of band-width (bi-directional) at low power, low latency.

In dual socket (2P) solutions, the same fabric will allow socket to socket communication at 32 GB/s bi-directional bandwidth speeds between the sockets and a total of 4 links with be initiated between sockets at a time so that each CPU die is connected to the peer die on second socket and so that the chip has to hop only twice, reducing latency. This means that the 4 links will be able to carry a total of 152 GB/s bandwidth between the two sockets while consuming 10.9W (socket) and 5.3W (per processor). The entire silicon die can consume 2.37W on average when it's configured at full speed. Detailed information on the latency, bandwidth and pings between the die and socket are mentioned by Anandtech: 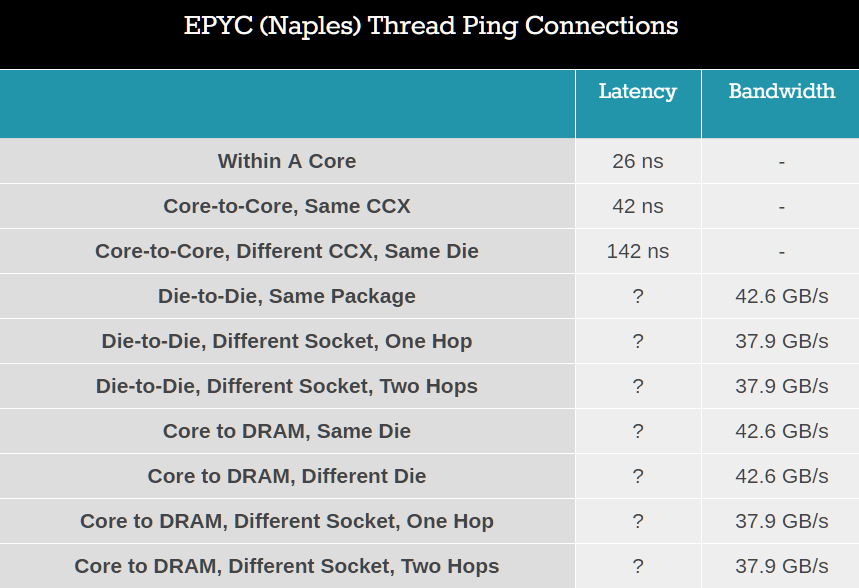 Overall, AMD is rating their die-to-die bandwidth to be the same as dual channel memory bandwidth, rated at 170 GB/s (4 x 42.6). 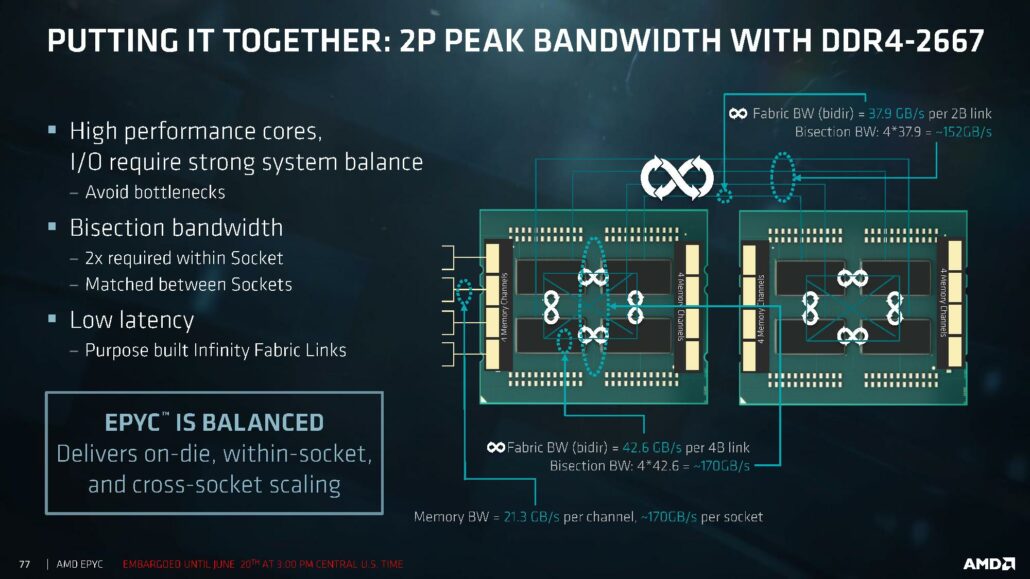 The benchmarks showcased by AMD are definitely impressive as EPYC is able to beat two socket Xeon configurations at similar or cheaper prices with better efficiency and more I/O capabilities. All processors of the EPYC 7000 series stack show disruptive performance results but it would be even better if we had gotten a comparison with Skylake-SP which is the actual competitor to the Naples / EPYC platform.

AMD says that there’s a 14% advantage of cores per rack that ship with their Naples platform compared to Intel’s. On Intel, a singular rack will consist of 4704 cores while AMD’s Zen based Naples Rack will ship with 5376 cores.

There’s also 14% advantage in VM (Virtual Machines) per socket. Memory bandwidth sees a 33% advantage as AMD has 8 channels while Intel’s Purley platform is configured for 6 channels per socket. Intel platform also supports 24 DIMMs while AMD can support up to 32 DIMMs. AMD is also suggesting highly competitive price to performance ratios on Naples processors that will give them a clear edge in the enterprise market.

In one of the power demonstrations, AMD used a single AMD EPYC 7601 processor with 128 PCIe lanes to run a total of 24 NVMe drives, each with a capacity of 3.2 TB which totals to 76.8 TB on a full PCIe 3.0 x4 link. The system still had 32 PCIe lanes left for use which is one of the key features of AMD's EPYC processors. 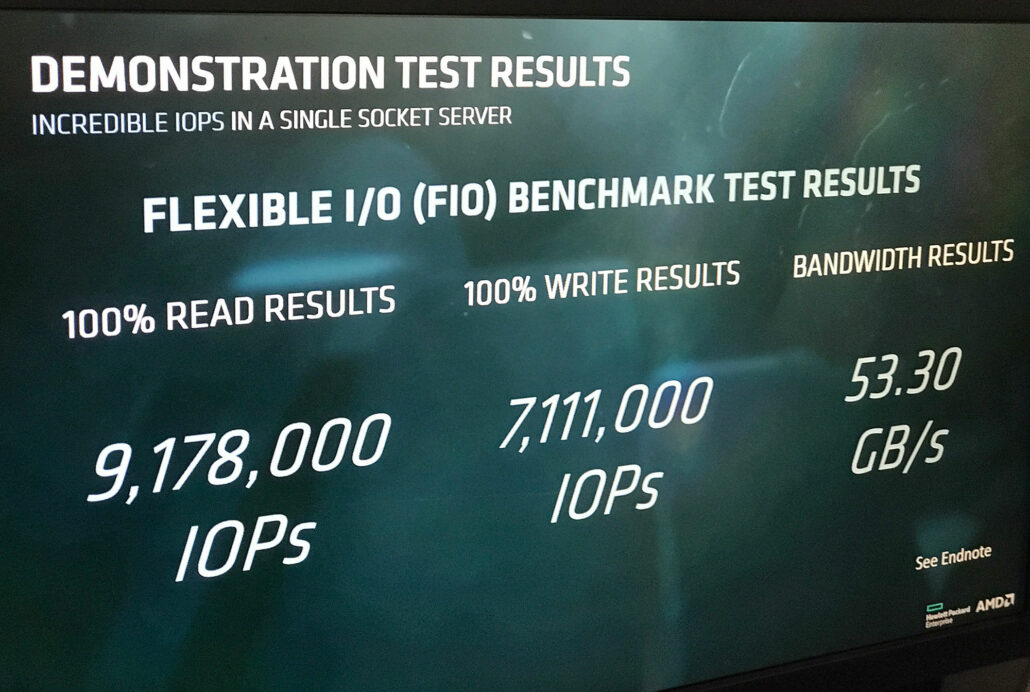 During a 128K random benchmark demo, the system scored 9.1 million (9,178,000) IOPS read, 7.1 million (7,111,000) IOPS write and delivered 53.3 GB/s of storage bandwidth which is impressive feat for the server chips. All of this was achieved on a single socket system which shows that AMD EPYC is even optimized for datacenter tasks where large amounts of data needs to be managed efficiently.

AMD has a full ecosystem ready for EPYC with partners such as HPE, Dell, EMC, Tyan Supermicro, ASUS, Lenovo and many more on board. A whole stack of critical software systems and developers tools will also be ready for EPYC, optimized for various workloads.

“The EPYC processor represents a paradigm shift in computing and will usher in a new era for the IT ecosystem,” said Antonio Neri, EVP and general manager Enterprise Group, HPE. “Starting with the Cloudline CL3150 and expanding into other product lines later this year, the arrival of EPYC in HPE systems will be welcomed by customers who are eager to deploy the performance and innovation EPYC delivers.” via AMD

While AMD EPYC is launched and being compared to Intel's Broadwell-EP chips from last year, it should be noted that Intel is also releasing their Skylake-SP platform in 2017 followed by Cascade Lake-SP in 2018. AMD has plans to introduce their Rome server lineup based on the new Zen 2 cores later in 2018 which will feature a 48 core chip codenamed “Starship” as detailed in an earlier leaked road map. More details on that here.