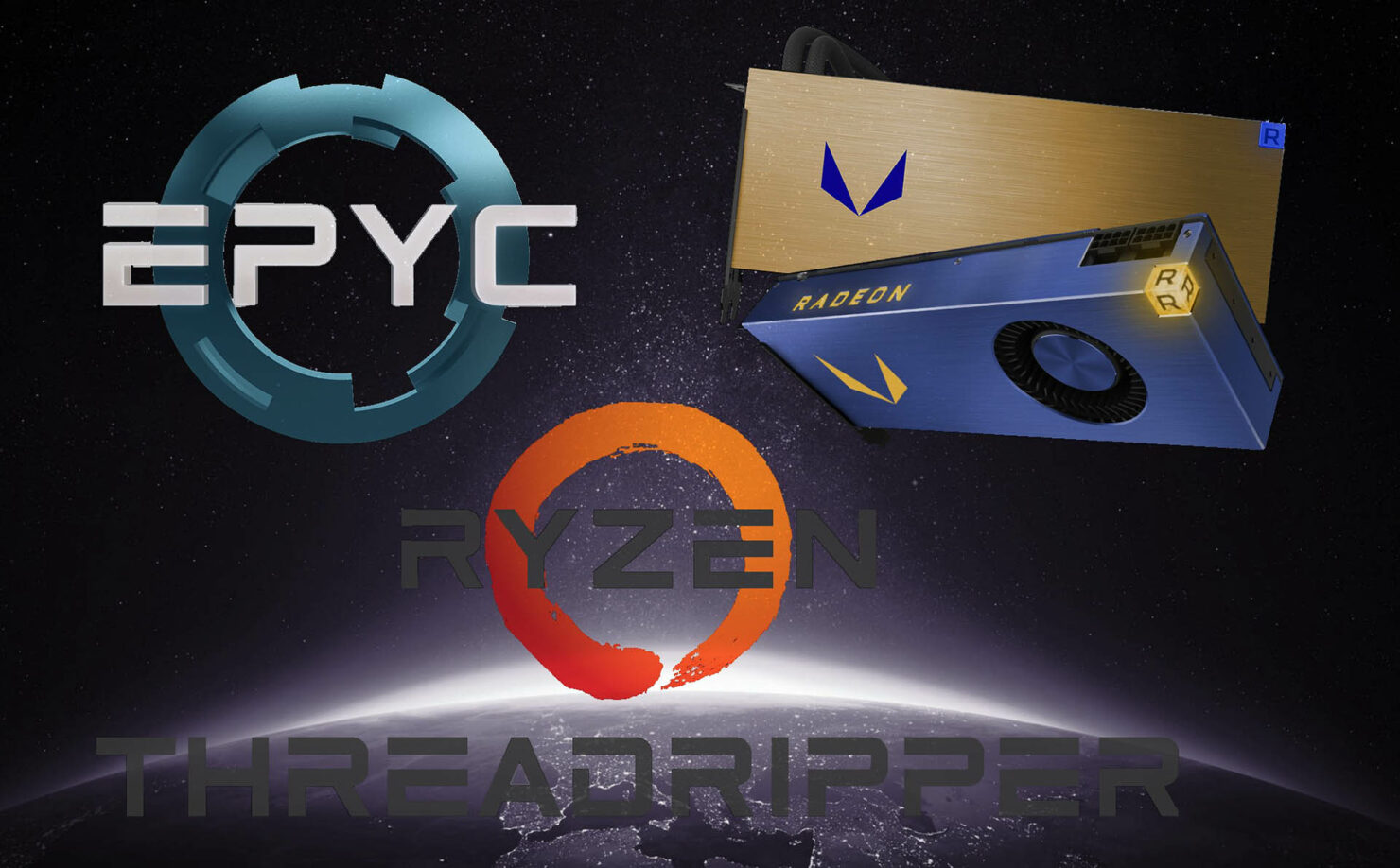 If you're looking for a roundup of what AMD announced and talked about at its 4 hour long Financial Analyst Day you've come to the right place. We attempt to distill this marathon of a media event down to its essence and skip all the fluff and filler. The company made several new key product and technology announcements. These include new graphics cards called the Radeon Vega Frontier Edition and Radeon Pro Vega SSG. New high-end desktop CPUs with up to 16 cores called Threadripper and finally, massive CPUs with up to 32 cores for the datacenter called EPYC.

Vega will be the first graphics architecture that the company will leverage in this growing space. On the software side of the machine learning equation AMD is choosing to continue embracing the open standards approach via its Radeon Open Compute platform initiative to enable developers to take advantage of Vega for AI and deep learning workloads.

At the event a live demo was shown of Vega running DeepBench, the most popular deep learning benchmark out there. The Radeon Vega Frontier Edition outperformed NVIDIA's P100 accelerator by 30%, which is currently the world's fastest graphics processor available on the market. For a first attempt it's actually quite remarkable what Vega is capable of in the machine learning arena.

For the gaming demonstration Vega was showcased running Sniper Elite 4 at 4K. This was a live demo where an AMD employee played through a short stretch of the game. Here, Vega delivered a consistent 60-70 FPS and we actually saw it hit 80 FPS in a couple of spots. A GTX 1080 Ti by comparison delivers right around the same 60-70 average frame rate although it's worthy of note that Sniper Elite 4 is an AMD optimized title, so the result is inherently skewed in Vega's favor here. We'll have to wait to see how well it does across a broader range of games. 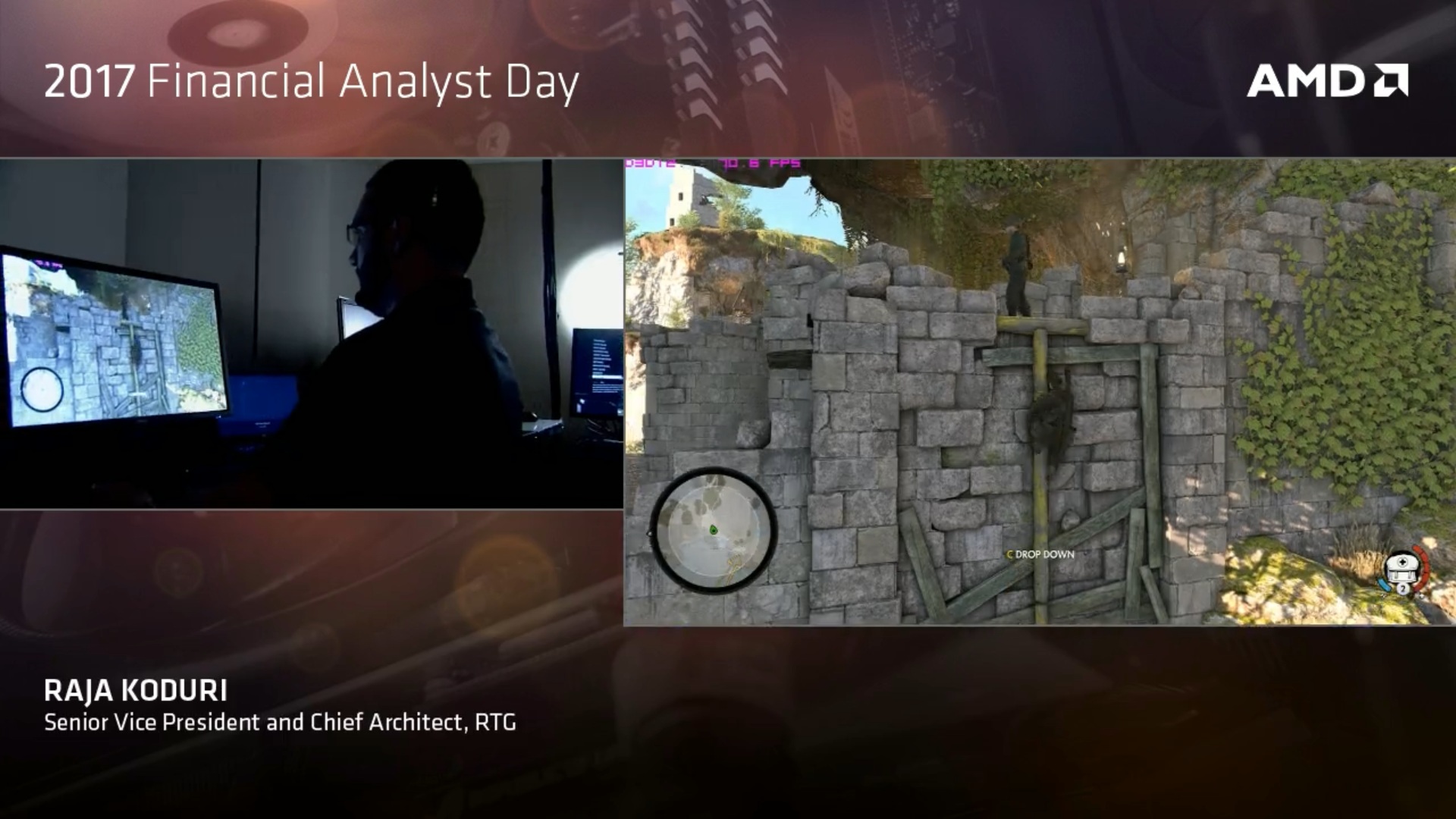 This brings us to the third Vega demo which involves Tomb Raider. Here only 2GB of memory on the graphics card was enabled to showcase how efficient Vega's High Bandwidth Cache controller is at streaming data in and out of the High Bandwidth Memory pool under extremely memory limited scenarios. Vega truly shined here.

With HBCC turned on, both the average and minimum framerates were substantially better in comparison to when the technology was disabled. In fact, the game appeared to run just as smoothly with 2GB and HBCC enabled as you would imagine it would if it were not memory limited at all. 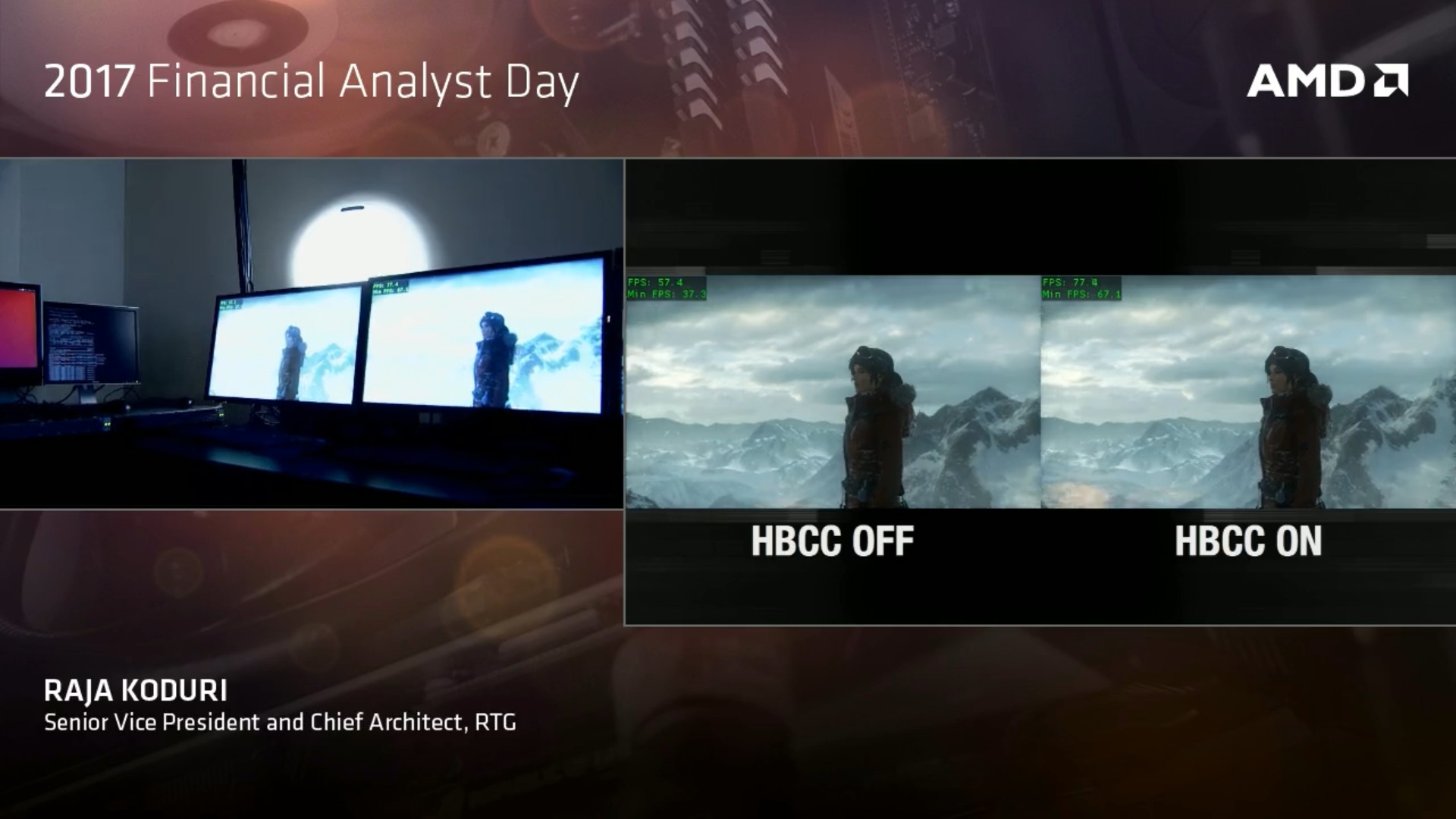 AMD's graphics guru Raja Koduri made it clear right off the bat that this card is not for gamers. According to Raja, this card is directed towards data scientists, engineers and product designers. The Radeon Vega Frontier Edition comes in two slightly different versions. A blue air cooled version and a golden water cooled version.

The Radeon Vega Frontier Edition graphics card will be the first Vega graphics product introduced by AMD according to Koduri and will be available in late June. The launch time-frame for Radeon Instinct AI accelerators and gaming oriented Radeon RX graphics cards hasn't been announced yet. We'll likely hear more information at the company's Computex press event in two weeks.

AMD debuted the concept of SSGs last year. In essence what AMD calls Solid State Graphics boards are simply GPUs that have been directly connected to solid state drives to exponentially expand the memory pool. Instead of just the 16GB of memory on board the Radeon Vega Frontier Edition, the Radeon Pro Vega SSG has access to two terabytes of non-voltatile memory in the form of an NVMe device. This is in addition to its ultra fast 16GB of high bandwidth cache.

Many professional workloads involve incredibly large data sets where such a large memory pool can dramatically improve performance. One example is ray-tracing., which involves tracing light rays in a way that simulates how photons behave in the real world to deliver life-like lighting effects. These types of workloads are simply impossible to run in real-time today on traditional graphics boards.

To demonstrate this AMD ran a real-time ray-tracing demo with the Radeon Vega SSG once with the onboard solid state storage disabled and once with it enabled. With it disabled the demo ran at what can only be described as a slide show, on the other hand with the SSG feature enabled it was buttery smooth. This is one of those things that you have to see to get, so we'd suggest checking out Raja's keynote at the 25 minute mark. You can find it here.

That's right, Jim Anderson, the company's head of the graphics and computing division confirmed that AMD will be launching Ryzen APUs with Vega graphics engines in the premium mobile market. These chips will go into ultra portable devices,  2-in-1s and gaming notebooks.

Ryzen's entry into the mobile segment promises to improve performance on a generational basis compared to AMD's current 7th generation APUs by 50% in CPU workloads and 40% in graphics. That's not even the best part. Jim claims that his engineering team has managed to achieve this performance improvement while cutting power in half on a generational basis. This translates to a whopping 100% improvement in performance per watt. Ryzen APUs will start shipping in the second half of the year.

Threadripper is a new kind of product for AMD, it'll be the company's first in over a decade to directly compete with Intel in the high-end desktop arena. Threadripper CPUs will be available in configurations with up to 16 corers and 32 threads. They will offer considerably more memory bandwidth, cache and I/O functionality compared to mainstream Ryzen processors. 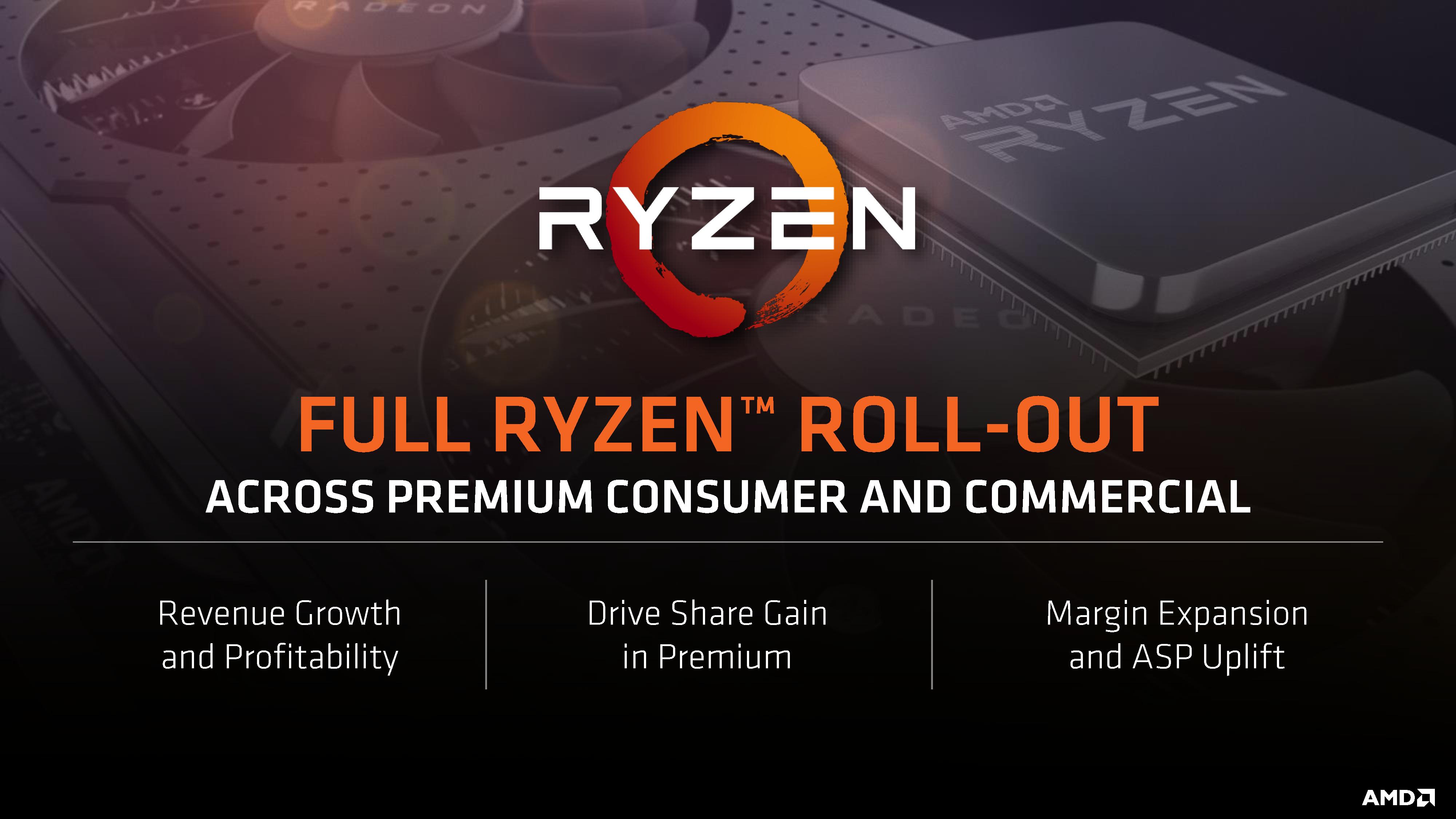 AMD announced that Ryzen Threadripper will be available on shelves this summer. AMD's Ryzen 7 1800X, the current desktop flagship, commands a suggested retail price of $499. Threadripper CPUs are expected to slot in above the 1800X., so you better start saving those pennies if you want one. Jim Anderson, AMD's head of computing and graphics, promised more info at Computex, so stay tuned.

EPYC is AMD Opteron reborn. A product designed to finally challenge Intel in the highly lucrative server business.  They will come in configurations with up to 32 cores and 64 threads. These brand new enterprise chips are built on the same 14nm FinFET manufacturing process that Ryzen processors are built on and are based on the very same Zen microarchitecture. In fact they are actually produced by bridging four Ryzen 8 core dies together using AMD's Infinity Fabric Technology.

With "EPYC" AMD states that it offers 45% more cores, 122% more bandwidth and 60% greater I/O bandwidth versus the competition. The robust feature set, in combination with Zen's incredible power efficiency, make for a very potent server product.

AMD will continue to refresh its EPYC lineup, following up with 7nm based "Rome" and "Milan" designs based on Zen2 and Zen3 cores over the next three years.

So there you have it folks, that's FAD in a nutshell. As a bonus we've included the full slide decks for Threadripper, Ryzen APUs, Vega and EPYC below.