At GDC 2022, AMD is revealing more details of their recently announced FSR 2.0 'FidelityFX Super Resolution' technology. Not only does the new tech improves upon FSR 1.0, offering better image quality but has wider support across various graphics cards from NVIDIA and AMD themselves & also allows developers to integrate it within games faster than ever.

Coming in Q2 2022, FSR 2.0 will offer various quality modes to gamers to get the balanced image quality and performance. There will be three primary modes, Quality, Balanced, and Performance like before but enhanced to offer better image quality and performance through the temporal upscaling techniques which bypass the requirement of ML (Machine Learning). AMD does point out that Machine Learning implementations do have their advantages but are not necessarily a pre-requisite to achieving better image upscaling. 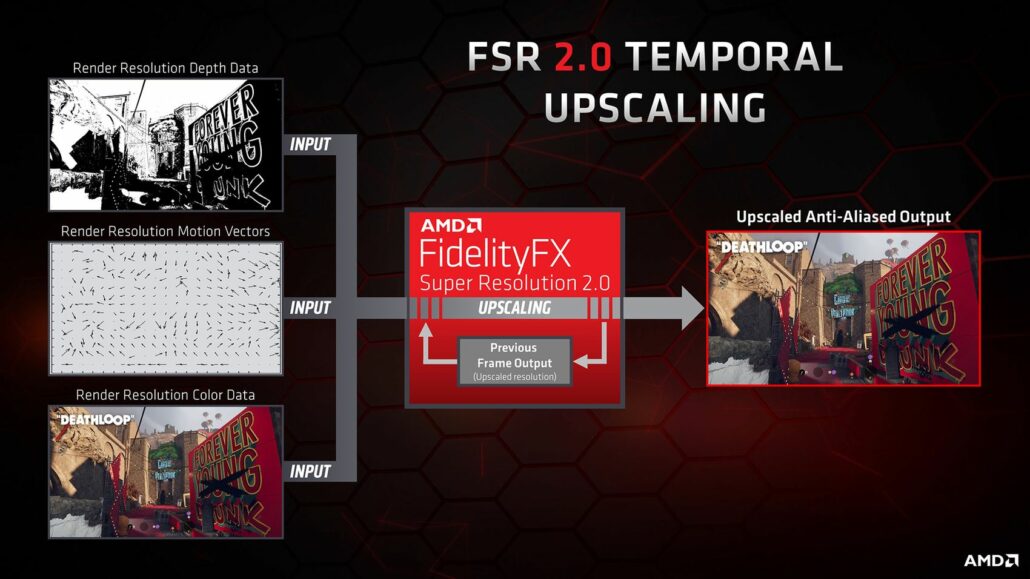 In addition to that, AMD's FSR 2.0 will offer support on a wide variety of graphics cards starting from AMD Radeon 500 series & above to NVIDIA's GeForce 10 series and above. Since FSR 2.0 is an advanced temporal upscaler, it is more demanding than FSR 1.0 which was a spatial upscaler.

Some highlighted features of FSR 2.0 include:

FidelityFX Super Resolution 2.0 is designed to boost framerates in supported games; however, it is fair to say that as FSR 2.0 is an advanced temporal upscaling solution, it will be more demanding on graphics cards than a spatial upscaling solution like FSR 1.0.

That does mean that while FSR 2.0 will support a broad spectrum of hardware, from both AMD and select hardware from our competitors, there are some caveats that gamers need to be aware of when compared to FSR 1.0. To start, though, we do want to say that as an open-source cross-platform solution, we are not placing any constraints on FidelityFX Super Resolution 2.0 compatibility, and what we are talking about here are recommendations for an optimal experience using the technology.

Noting the above then, for an optimal FSR 2.0 experience, we have some recommendations for the starting level of graphics card for the different target upscaled display resolutions. One thing to keep in mind, though, is that your gaming experience may vary with these hardware suggestions. Depending on your specific system specifications, the system requirements of individual games that support FSR 2.0, and your target resolution, you may be still able to have a good upscaling experience on lower-performing or older GPUs than listed below.

Like FSR 1.0, FSR 2.0 has different quality modes that allow you to customize the balance of image quality to performance to your preference. FSR 2.0 has three primary quality modes you can expect to find in all games supporting the technology, and one optional mode for developers to use if they desire. 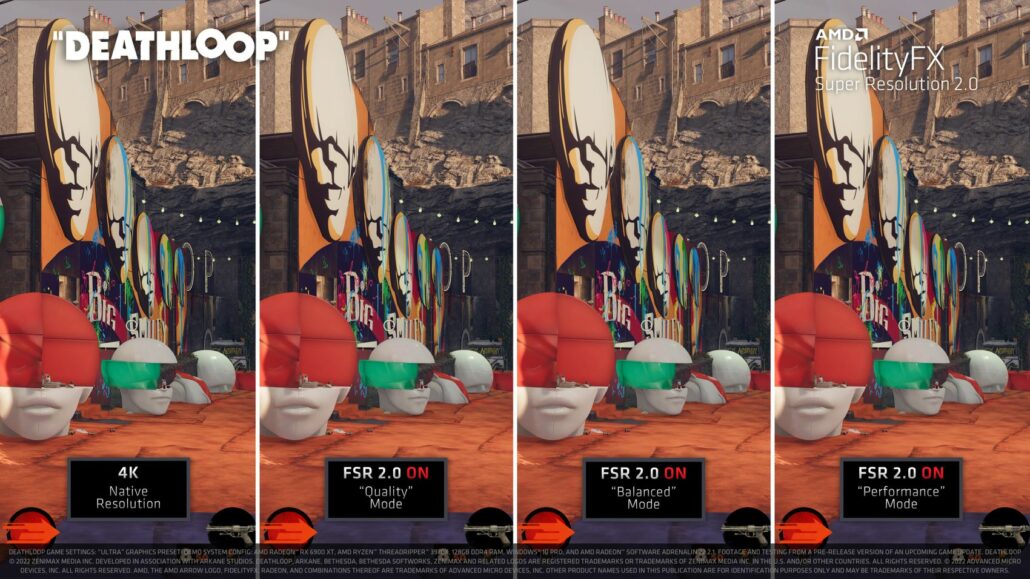 We’ve adjusted the modes a little from FSR 1.0, with the highest quality setting now being “Quality” mode, which aligns with the modes available in other popular temporal upscaling technologies. The other two primary modes are “Balanced” and “Performance”, and you can see the details of each model in the table below.

The fourth optional “Ultra Performance” mode is also available for developers who want to include a mode that is designed to offer the ultimate in performance gains while still maintaining an image quality representative of native rendering. More info about this mode is available on GPUOpen.

You can download the original uncompressed PNGs (~20MB each) of the whole 4K scene, along with PNGs from another scene.

AMD also states that unlike FSR 1.0, FSR 2.0 is very easy to integrate within games. It is stated that games that already have temporal upscaling data in place will take literal days to add FSR 2.0 but those that don't can still take longer to integrate.

As FSR 2.0 required the three data points in the diagram above at render resolution -- depth, motion vectors, and color -- developers will find it easier to integrate FSR 2.0 into games that already have a temporal upscaling rendering path. Keeping that in mind, although FSR 2.0 is still easy for developers to add to their game like FSR 1.0, integration time estimates can vary – it can be as little as a few days for games that already have the needed temporal upscaling data in place. However, for games without motion vectors or support for decoupled display and render resolutions, integration can take longer.

Just like FSR 1.0, FSR 2.0 will be open source via the MIT license and will be available for developers as an intuitive easy-to-use API (with the source provided via a library) that supports DirectX® 12 and Vulkan®, and there will also be a plug-in for Unreal® Engine.

How is FSR 2.0 going to be available?

We will make FSR 2.0 available via GPUOpen on GitHub in the foreseeable future. Once it’s posted you’ll have access to:

As we prepare FSR 2.0 for its release, we are working with developers like Arkane Studios and Luminous Productions to bring FSR 2.0 to as many games as possible, with the first games being made available in Q2 2022. We’ll have more info to share about FSR 2.0 later in the quarter.